REFLECTION FOR MONDAY OF THE FIFTH WEEK OF LENT 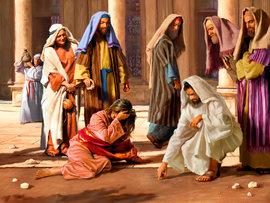 It’s shocking how often the accuser is guilty of the accusations they throw; particularly, those who implement or exercise laws, ending up being the victims and violating such laws. Such was the case in today’s Readings.

In the Gospel Reading (cf. John 8:2-11), we see the case of a woman caught in the act of adultery taken to Jesus by the Scribes and Pharisees, accusing her of breaking the law; however, in the end, the Scribes and Pharisees who accused her turned out to be guilty themselves. A similar event also was recorded in the First Reading (cf. Daniel 13:1-9,15-17,19-30,33-62) involving the innocent Susanna accused of adultery by two wicked elders, and at the end, the wicked elders turned out guilty of false accusation. Considering both scenarios, we have a lesson to learn; let us consider the context in Judaism.

In Judaism, whenever someone was caught in adultery, both the man and the woman would be brought to the temple gates and accused with witnesses to confirm the issue, these would then ceremonially bring down judgement on both of them.  In this regard, the priest was required to then stoop down and write the law that had been broken at the temple’s door (which is usually a dusty ground) as long as the writing won’t be permanent, along with the names of the accused, which is then followed by stoning of the accused (man and woman).

On the contrary, in the context of the story of the adulterous woman in the Gospel, the man was nowhere to be found; rather they chose to bring only the woman. The Pharisees did this intentionally because they really wanted to entrap Jesus; and as such, the complete number of the offenders (the man and woman) meant nothing to them. By presenting only the woman, the Scribes and Pharisees violated the Law of God. Also, there were no witnesses to affirm what the accusation was; they said to Jesus: “Master, this woman was caught in the very act of committing adultery…” Now, who caught the woman? Nobody to confirm the story as a witness (which was also another factor for condemning the accused). Therefore, in order to remind them of their guilt, Jesus, being the ideal and authentic teacher and interpreter of the Law, takes the role of the priest and writes on the ground. According to scholars, instead of writing down the law the woman violated, he wrote the law that the Scribes and Pharisees violated. In place of writing the woman’s name, he wrote the names of the Pharisees and Scribes. By doing this, Jesus showed them that they were not keeping the Law themselves, and of course, were guilty. By writing on the dusty ground, Jesus was simply reminding them of the Book of Jeremiah 17:13 – “Yahweh, hope of Israel, all those who abandon you shall be put to shame, those who turn aside from your ways will have their names written in the dust and blotted out, for they have departed from Yahweh, the fountain of living water.” It was in this context that Jesus finally turned to them (after plainly demonstrating they were violating the law themselves) and said, “He who is without sin among you, let him first cast a stone at her.” Realizing this, they left his presence, beginning with the eldest, filled with the consciousness of their guilts, and since the eldest left, the younger ones were left with no other choice than to leave too.

Dear friends in Christ, before casting “stones” (passing judgement) on others, we must make sure that our own slate is clean. Also, whenever we are faced with false accusations, may the story of Susanna in the first reading inspire us to be firm till the end; may our trust be firm as that of today’s Psalmist [cf. Ps. 22(23): “If I should walk in the valley of darkness, no evil would I fear…”], with the faith that God would not abandon us to shame at the hands of the wicked ones.