REFLECTION FOR FRIDAY OF THE SECOND WEEK OF EASTER 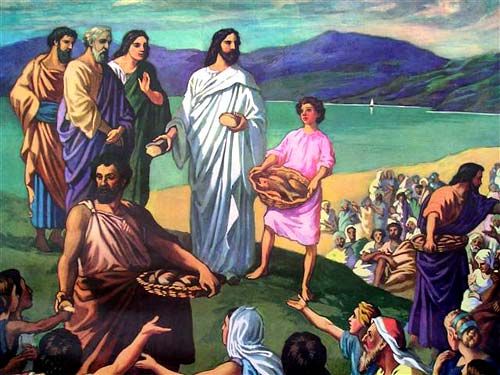 The signs recorded in the Gospel of John reveal some very significant characterises of the power of Jesus, and they confirm His deity. The miracle of the multiplication of loaves (the feeding of the five thousand) as recorded in John’s Gospel, in today’s Reading, (cf. John 6:1-15) is technically denoted by the Johannine Community as a ‘sign’. This is so because this miracle together with some previous ones led people to search for Jesus. This is also what a sign does, it reveals, leads and directs people to discover something. This explains why in the opening paragraph of today’s gospel reading, John says: “Jesus went off to the other side of the Sea of Galilee – or of Tiberias – and a large crowd followed him, impressed by the signs he gave by curing the sick.

It is interesting to note that this particular sign of the multiplication of loaves was as a result of an ‘insignificant person’ among the crowd – a little boy with insignificant resources – five barley loaves and two fish within a great multitude. Put differently, Jesus did not cause bread to rain down from heaven but worked with the cooperation of a little boy who surrendered his “goods” to be used by Jesus in feeding the crowd. Here, the insignificant boy with insignificant resources (cf. v. 9: “but what is that between so many”), which could have been easily ignored, becomes significant at the end of the day; and through that, the Lord worked the sign, and the crowd was fed to their satisfaction with twelve baskets full of leftovers. This sign led the people to recognize Jesus as the “Prophet” (spoken about by Moses in Deuteronomy 18:15); and as such, attempted to take him by force and make him king.

Likewise, in the First Reading, we learn of an insignificant group among the Jews called the followers or disciples of Jesus, punished and warned from preaching in the name of Jesus.  Inasmuch as the activities of followers of Christ posed a threat to them, they still felt it was an insignificant group; this we see in the words of Gamaliel, a well respected Pharisee and a member of the Sanhedrin in the First Reading (cf. Acts 5:34-42). For him, if the movement is not from God, it will disappear, like so many other movements. But, if it is from God, the Sanhedrin would not be able to stop it. They felt it Christianity was like the other insignificant groups that died off after the death of their founders. nevertheless, the Church which began with an insignificant number has blossomed and endured for over 2,000 years because it is from God.

Dear friends in Christ, the lessons from today’s readings illustrate to us how an insignificant amount/quantity can go a long way in becoming significant. While praying for the poor and the needy, we are called to also be the answers to their prayers by sharing our goods with them, even if what we’ve got are quite insignificant. Like the boy of today’s gospel with very little resources in comparison with the crowd, so also, we are challenged to utilize our little resources in relieving the needy in this period of quarantine/lockdown, for it would definitely go a long way to put a smile on their face. It is when we do this that the Lord’s goodness would be seen in our world, just as today’s Psalmist says: “I am sure I shall see the Lord’s goodness in the land of the living. Hope in him, hold firm and take heart. Hope in the Lord!” [Psalm 26(27):1,4,13-14]