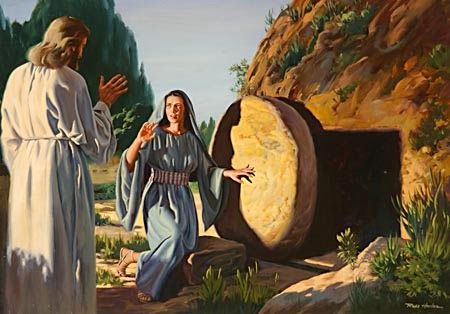 It is natural to see people grieve and weep as a result of the demise of a loved one. The thoughts of how lovable, caring, amiable, etc. some persons had been, coupled with the feeling of their absence in our lives (vacuum) are enough to make us grieve and often times weep uncontrollably at their death. At times, the grief gets worse when a person dies by a Plane crash or in such a horrible way that the body (remains) could not be found; or after death, the corpse gets lost or stolen.  This, for sure, is a horrible experience because what is supposed to be left behind in memory for burial is nowhere to be found.

Mary Magdalene of today’s Gospel (cf. John 20:11-18) seemed to have a similar experience. After ‘swallowing the bitter pill’ of Christ’s death, she had to face a seeming reality of the disappearance of the remains of Jesus, which was buried in the tomb; as such, she stayed outside near the tomb weeping, for she did not know where they had put the body of Jesus. Nevertheless, her sorrow turned into joy when she realized that the body of her Master was not stolen but that, in fact, he has risen from the dead. After experiencing the risen Christ at the graveyard, she became a missionary; as John tells us: “So Mary of Magdala went and told the disciples that she had seen the Lord and that he had said these things to her.”

Dear friends, you may have been weeping lately as a result of the demise of a loved one. You may probably have grieved the demise of a friend or a family member who was a victim of COVID-19. Some persons have gone on their knees, wept and prayed to God to bring to an end to this pandemic threatening humankind. Nevertheless, as St. Paul advises us in 1 Thessalonians 4:13, we ought not to weep as those who have no hope. Since Christ has risen from the dead, there is certainly hope for humanity in all her distresses.

As we look forward with hope and confidence in God to wipe away our tears, as he did to Mary Magdalene, may we continually dispose ourselves to accept the Good News of Easter as stated by Peter in the First Reading (cf. Acts 2:36-41) through the saving powers of the Sacrament of  ‘Baptism, Confirmation, and Penance’, capable of preparing each and every one of us properly to receive the other necessary Sacraments, and become missionaries as Mary Magdalene. As we do this, may the love of the Lord continually be upon us since we have placed our trust in Him. Amen. [cf. Psalm 32(33):4-5,18-20,22]