IS THERE A QUEEN IN THE KINGDOM OF HEAVEN? 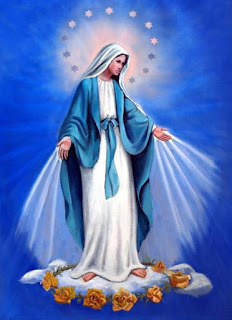 IS THERE A QUEEN IN THE KINGDOM
OF HEAVEN?

Aside from the
prophetic types present in the Kingdom of Judah, The Psalmist, when speaking
about the Kingdom of God, also speaks of the Queen: “Your throne, O God,
shall endure forever. A scepter of justice is the scepter of your kingdom. Your
love is for justice; your hatred for evil…From the ivory palace you are greeted
with music, the daughters of kings are among your loved ones. On your right
stands the QUEEN in gold of Ophir” (garments of gold). (Ps. 45)

Above
all, Revelation chapter 12 says: “A
great sign appeared in heaven: a woman clothed with the sun, with the moon
under her feet, and on her head a crown of twelve stars. She was pregnant and was
crying out in birth pangs, in the agony of giving birth. Then the dragon stood
before the woman who was about to bear a child, so that he might devour her
child as soon as it was born.  And she
gave birth to a son, a male child, who is to rule all the nations with an iron
rod, and the Child was taken up to God and his throne…”
Dearest
friends, this
passage is talking about the woman that gave birth to the Saviour. She has a
Crown. The passage also clearly shows Mary as an active participant in the war
against the devil. The Passage presents Jesus on his rightful throne. Psalm 2:9 says “with an iron rod you shall shepherd them”. In the New
Testament, the passage that introduces Mary as the Queen with 12 stars for a
crown (Rev 12:1) describes her as “the woman” who brings forth a male
child who will rule the nations with an iron rod.”
Therefore, we believe Jesus chose Mary
to be the Queen Mother in his Kingdom. Besides, all the faithful will be given “crowns”
(1 Pt 5:4, Rev 2:10, 2 TIm 2:11-12, 2 Tim 4:7-8) How much more would Mary, his
mother, receive the crown as Queen?
Therefore,
on this day we pray that our Blessed Mother, the Queen of Heaven would continue
to exercise her Queenship role by interceding for us to Christ her Son, just as
she did at the wedding feast at Cana, and by honouring her as the Queen of
heaven, we may come to a perfect and intimate friendship with Christ her Son.
Amen.
Mary,
Queen of Heaven, pray for us who have recourse to thee!
Shalom!
CLICK HERE ALSO TO READ: “A SCRIPTURAL EXPLANATION OF THE ASSUMPTION OF THE BLESSED VIRGIN MARY, ARK OF THE NEW COVENANT”