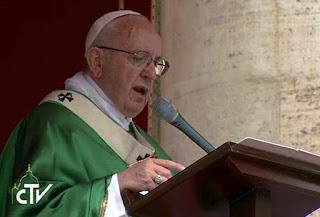 POPE DECRIES ‘SHUTING EYES’ TO THE SICK, DISABLED
Posted
by Deborah Castelo Lubov on 12 June, 2016
“What
an illusion it is when people today shut their eyes in the face of sickness and
disability!” Pope Francis has said, decrying, “They fail to understand the real
meaning of life, which also has to do with accepting suffering and
limitations.”
Pope
Francis made this strong statement yesterday morning during the concluding Mass of
the Jubilee for Sick and Disabled, June
10-12-2016, in St. Peter’s Square.
In
his homily, the Pontiff drew inspiration from St. Paul’s letter to the
Galatians, who says, “I have been crucified with Christ; it is no longer I
who live, but it is Christ who lives in me,” noting how the
Apostle powerfully expresses the mystery of the Christian life, which can
be summed up in the paschal dynamic of death and Resurrection
received at baptism.
Francis
pointed out that this rebirth embraces every aspect of our lives: even
sickness, suffering and death are taken up in Christ and in
him find their ultimate meaning. He suggested how this Jubilee day for the sick
and disabled is an appropriate time to remember this and to recall that all
faithful at some point or another are called to face frailty and illness, be it
their own or of others.
Illusions
The
78-year-old Pope recalled that human nature is marked by its limitations.
“In
an age when care for one’s body has become an obsession and a big business,
anything imperfect has to be hidden away,” Francis lamented, “since it
threatens the happiness and serenity of the privileged few and endangers the
dominant model.”
The
Pope criticized that such people “should best be kept apart.”
Francis
decried that people ‘illude’ themselves when they close their eyes to the
suffering, noting they don’t understand the meaning of life which comes with
its limitations.
“The
world does not become better because only apparently “perfect” people live
there – I say “perfect” rather than “false” – but when human solidarity, mutual
acceptance and respect increase.”
Francis
recalled that today’s Gospel (Lk 7:36-8:3) presents us with a
specific situation of weakness, in which a woman caught in sin is judged and
rejected, yet Jesus accepts and defends her. This tenderness, he explained
shows God’s love for those who suffer and are cast aside.
2
Types of Suffering
The
Jesuit Pontiff noted how suffering need not only be physical, noting that one
of today’s most frequent pathologies is also spiritual.
“It
is a suffering of the heart; it causes sadness for lack of love. It is the pathology
of sadness. When we experience disappointment or betrayal in important
relationships, we come to realize how vulnerable and defenceless we are. ”
The
happiness which we desire, Francis explained, can be obtained only through our
capacity to love, without exception.
He
also posed to the present the question of whether we can  “reproach God
for our infirmities and sufferings when we realize how much suffering shows on
the face of his crucified Son?”
The
Pope urged the faithful to imitate Jesus, whose “physical pain was accompanied
by mockery, condescension and scorn,” but  “responded with a mercy that
accepts and forgives everything.”
“Jesus
is the physician who heals with the medicine of love, for he takes upon himself
our suffering and redeems it. We know that God can understand our infirmities,
because he himself has personally experienced them (cf. Heb 4:15).”
Pope
Francis concluded, reminding those gathered that the way one experiences
illness and disability is “an index of the love” they are ready to offer, and
that in weakness, one can become strong.

YOU MAY ALSO LIKE: POPE FRANCIS GIVES PRACTICAL LESSONS ON HOW TO BE ‘SALT OF EARTH’ AND ‘LIGHT OF THE WORLD’