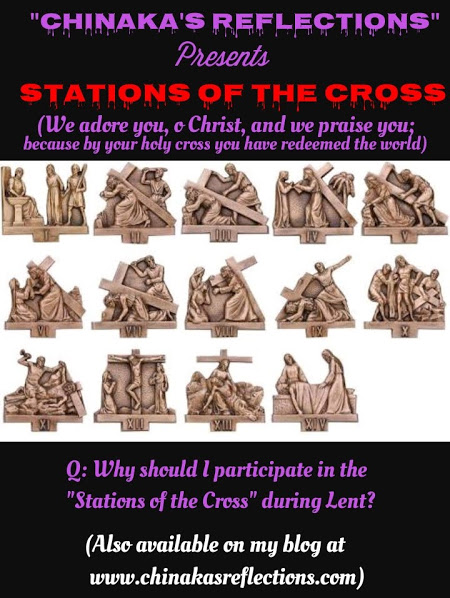 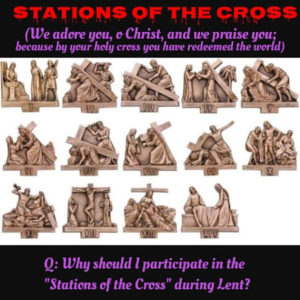 It’s that time of the year again, a period which we in one accord in fellowship with the ages past, keep vigil with our heavenly Lord, in his temptations and his fast by contemplating his sorrowful passion on the way to Calvary and death on the cross in order to celebrate with utmost joy the Easter festival. This activity is usually called “THE STATIONS OF THE CROSS”; usually done on Wednesdays and Fridays of Lent. Many do see it as a routine practice every lent, but have we taken time to reflect deeply on the intrinsic meaning of this activity and the graces it gives to our souls? What exactly is the “Stations of the Cross”, and why should I participate in it?
The Stations of the Cross (or Way of the Cross); is also known as “Via Crucis” in Latin; also called the Via Dolorosa or Way of Sorrows, or simply, “The Way”. It refers to a series of artistic representations, often sculptural, depicting Christ Carrying the Cross to His crucifixion (The last hours of Christ before his death). This is found in most Catholic Churches, typically placed at intervals along the sidewalls of the nave; in most churches, they are small plaques with reliefs or paintings. The tradition of moving around the Stations to commemorate the Passion of Christ began with St. Francis of Assisi in 1686, but by the late 1800’s, the stations had been placed in most Catholic churches. Traditionally there are only 14 stations, but St. Pope John Paul II encouraged Catholics to use a 15th station, the Resurrection of Christ.
The object of the Stations is to help the faithful to make a spiritual pilgrimage of prayer, through meditating upon the chief activities of Christ’s sufferings and death. Put differently, the Stations help us to connect emotionally with the suffering that Jesus accepted so that he could save us from hell. This should fill us with a deep thankfulness that inspires us to repent- to turn away from sin and turn back to God by doing what is right.
Also, the stations remind us to imitate the heroic goodness of the Jesus, Mary, Veronica, John, Joseph of Arimathea and others. The stations turn our attention to the identity of Jesus- true God and true man. This reminds us of the compassion which we must show to all human beings who suffer. The stations remind us that cruelty and abuse are evil. Solidarity (oneness) with Christ requires solidarity with all who are abused or neglected, including our fellow Christians suffering persecution for their faith in Communist societies.
More importantly, this is an act of reparation to Jesus. In this vein, the encyclical letter, “Miserentissimus Redemptor”, on reparations, Pope Pius XI called the Acts of Reparation to Jesus Christ a duty for Catholics and referred to them as “SOME SORT OF COMPENSATION TO BE RENDERED FOR THE INJURY” with respect to the sufferings of Jesus. Pope John Paul II referred to Acts of Reparation as the “UNCEASING EFFORT TO STAND BESIDE THE ENDLESS CROSSES ON WHICH THE SON OF GOD CONTINUES TO BE CRUCIFIED”.
Many of us don’t want to be associated with those passing through suffering and necessities of life. However, we are often encouraged to come to the aid of our brothers and sisters in need; this is what we call a practical approach to mercy. On the last day, our Lord would judge us based on our charitable deeds (works of mercy) etc (Cf. Matt. 25:35-40). Hence, If we partake in the activities of the Stations of the Cross and refuse to carry out the works of mercy towards our brothers and sisters in need, then we are really wasting our time.
We are called to participate in this enriching exercise. Thus, as we make our spiritual pilgrimage to Calvary by contemplating on the chief mysteries of our salvation (The passion, death, and resurrection of Christ) via the activity of the Stations of the Cross, we ask the good Lord for the grace to imitate the good works of Christ and the courage to bear witness to gospel in a practical dimension of charity and mercy. Amen.
May the Lord Jesus who suffered, was crucified, died and rose from the dead; BLESS + you, in the name of the FATHER and of the SON and of the HOLY SPIRIT. Amen!