OCTOBER DEVOTION: UNDERSTANDING THE MARIAN TITLES IN THE LITANY OF LORETO (PART 2) – DAY 18: “QUEEN OF THE MOST HOLY ROSARY” (REGINA SACRATISSIMI ROSARII) 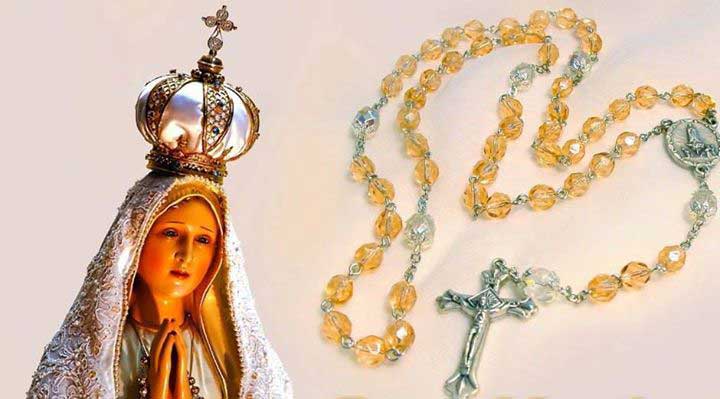 DAY 18: “QUEEN OF THE MOST HOLY ROSARY” (REGINA SACRATISSIMI ROSARII) 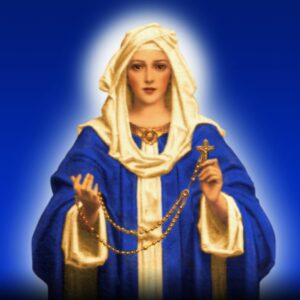 As many of us know, the form of the Rosary as we have today came to us through the Holy founder of the Order of preachers (Dominicans). Put differently, St. Dominic received the Holy Rosary from the Blessed Virgin Mary in an apparition in 1214. Be that as it may, it is pertinent to make clear that the Holy Rosary has been in existence even before the time of St. Dominic but in its crude form. The word rosary comes from Latin, meaning “a garland of roses”, the rose being one of the flowers used to symbolize the Virgin Mary. Some Protestants now say the rosary, recognizing it as a truly biblical form of prayer—after all, the prayers that comprise it come mainly from the Bible. The origin of the Holy Rosary is actually complex, dating itself to the times of the early Christians. Also, the practice of counting prayers dates itself to the Old Testament times. Originally the rosary had 150 beads, the same number of psalms in the Bible. In those days, religious orders recited together the 150 Psalms as a way to mark the hours of the day and the days of the week. Those people who didn’t know how to read wanted to share in this practice, so praying on a string of 150 beads or knots began as a parallel to praying the psalms as a way that they could remember the Lord and his Mother throughout the day, by reciting the Lord’s Prayer and the Hail Mary. 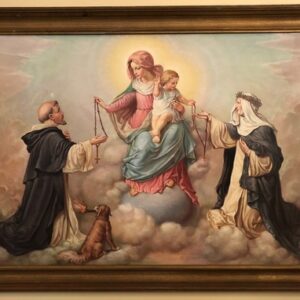 The “Divine Office”; the official prayer of the church; is the recitation of the psalms and canticles over a four week period and is still prayed today. The pertinent question that arises here is: why were the illiterates asked to pray the Lord’s Prayer and the Hail Mary in substitute for the psalms, since they cannot read and write; why can’t other forms of prayers be used? It is apposite to note that there exists an intrinsic relationship between the Psalms and the New Testament (Gospels). Put differently, the Psalms gives an allusion to the life of Christ in the New Testament; in the same vein, the Holy Rosary is seen as the summary of the life of our Lord Jesus Christ in his Redemptive work, and the cooperation of his Blessed Mother in its realization. It was in this light that we come about the origin of praying and counting on beads (the rosary in its crude form) which came to serve as a substitute for the psalms especially for those who cannot recite the Liturgy of the Hours (Divine Office) 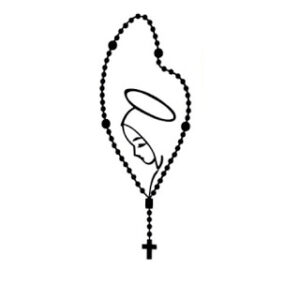 This first rosary was prayed in a way that a person would pass their fingers over each bead and say a prayer, usually the “Our Father.” The “Hail Mary” prayer came later. Then people said the “Hail Mary” in the twelfth century, that is, “Angel Gabriel’s Greeting.” Hence, “Hail Mary, full of grace, the Lord is with thee” was often said along with the Our Father. Later, Elizabeth’s greeting: “Blessed are you among women” was added. It was not until the sixteenth century that the words “Holy Mary, Mother of God, pray for us sinners now and at the hour of our death” were added. Various people have added other things to the rosary over the centuries. In the fifteenth century, a Carthusian monk divided the rosary into fifteen brackets (or decades) and a Dominican assigned a mystery to each of the decades. These mysteries were events in the life of Jesus as written in the gospels, and understood to the illiterates. The Marian apparition to the three children at Fatima in 1917 was to encourage devotion to Her Immaculate Heart, daily recitation of the Holy Rosary and to make reparation for sins. 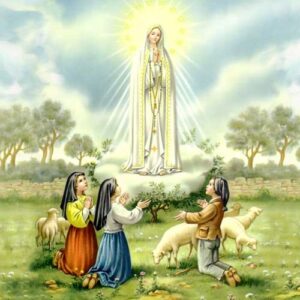 On October 16, 2002, Pope St. John Paul II declared that the following year would be the “Year of the Rosary”. For the first time in centuries, a change was made in the rosary. The Pope added and defined 5 new mysteries that concerned events in the public life of Jesus. These new mysteries were called the “Luminous Mysteries” or “Mysteries of Light.” Today’s complete rosary is now made up of twenty decades of the Hail Mary, separated by the mysteries, Our Father and a “Glory Be,” and sometimes the Fatima prayer (Oh my Jesus forgive us our sins, save us from the fire of hell, lead all souls to heaven, especially those who are most in need of your mercy). Despite all the additions and changes, the important core of the rosary has always remained the same. It is a way for God’s people to make holy the day, and to remember the life of Jesus and his mother. 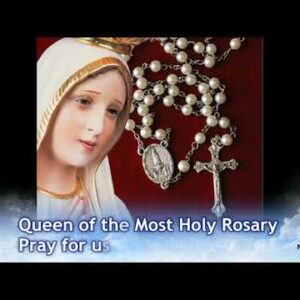 In its relationship with the litany, we can say that the Litany and Rosary are “sister devotions” that use the repetition of truths of faith as spiritual pedagogy. The essence is not exactly in repetition, but in meditation and contemplation of the mysteries of our salvation; that is, in the Paschal Mystery of Jesus Christ. This is the real centre of Litany and Rosary. In fact, we do not pray “to” Mary but “with” Mary. She is not the final destination of our trip, but a roadside sign that points the correct entrance to heaven! Pope St. John Paul II placed Litany and Rosary side by side in his last Apostolic Letter: “Rosarium Virginis Mariae.” There, he says in a very beautiful way: “The Rosary, though clearly Marian in character, is at heart a Christocentric prayer. In the sobriety of its elements, it has all the depth of the Gospel message in its entirety, of which it can be said to be a compendium. It is an echo of the prayer of Mary, her perennial Magnificat for the work of the redemptive Incarnation which began in her virginal womb. With the Rosary, the Christian people sits at the school of Mary and is led to contemplate the beauty on the face of Christ and to experience the depths of his love. Through the Rosary the faithful receive abundant grace, as though from the very hands of the Mother of the Redeemer.” (RVM, #1). He also says that in the Rosary it is the whole Church that “remembers Christ with Mary”, “announces Christ with Mary” finds Christ through “the way of Mary”. 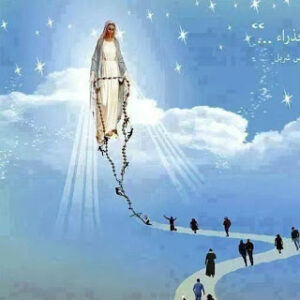 Some people often criticize Rosary and Litany. The most common is that it is a monotonous and repetitive prayer. Those who usually say this are oblivious of the correct “contemplation technique.” In the Litany, we use the same dynamics as in the Rosary, but with a variation. The Rosary leads us to contemplate the different mysteries of Christ’s life. The Litany leads us to a dynamic Marian catechesis, which ends up leading us to the same point: the mystery of Jesus Christ. Therefore, these meditations can be very useful so that the recitation of this prayer does not become monotonous and automatic.

That the Rosary ends with the “Hail Holy Queen” indicates that Mary is our queen, and through the Litany, we come to contemplate her as our catechist. Therefore, as we invoke the prayers of the Queen of the Most Holy Rosary through the daily recitation of the Holy Rosary, may we continually come to a realization of the divine will for us as contained in Scripture.

“O God, whose only begotten Son, by His life, death, and resurrection has purchased for us the rewards of eternal salvation. Grant, we beseech Thee, that meditating upon these mysteries in the Most Holy Rosary of the Blessed Virgin Mary, we may imitate what they contain, and obtain what they promise, through the same Christ our Lord. Amen.” 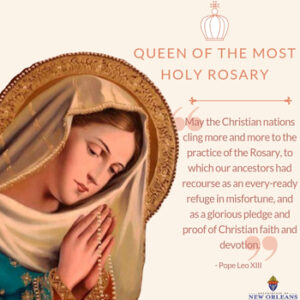 Oh “Queen of the Most Holy Rosary” (Regina Sacratissimi Rosarii), pray for us that we may be made worthy of the promises of Christ. Amen