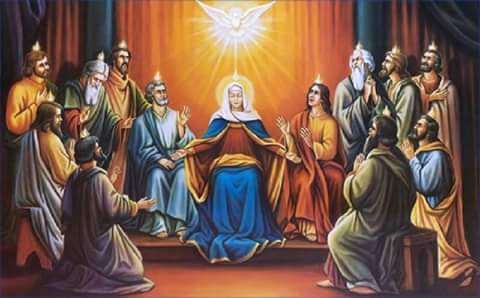 The fourth of the twelve invocations of the Blessed Virgin Mary as “Queen” praises her as “Queen of the Apostles,” (Latin, Regina Apostolorum), which becomes the theme of our reflection today, the eleventh day of our October Devotion. Apparently, Jesus chose twelve apostles (men) to follow him more closely from the many disciples he had. The number twelve is an allusion to the twelve tribes of Israel. However, in what context can the Blessed Mother of God be known as the “Queen of Apostles?” Is the title “Regina Apostolorum” an appropriate one for her, being an invocation or devotion that is one of the oldest devotions in the Church? 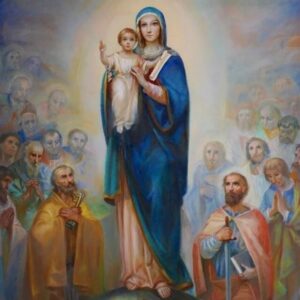 First, the term Apostle springs from the Greek “ἀπόστολος” (apóstolos), literally “one who is sent off”, from the verb “ἀποστέλλειν” (apostéllein), “to send off”. Our Lord Jesus Christ was also referred to as “Apostle” (cf. Heb 3:1) because he was “sent” by the Father (as John the evangelist describes Him); as a result, He could be said to be the “King of Apostles.” Being sent by the Father, Christ began His apostolate through Mary’s intercession at Cana. Likewise, the mission of the apostles commenced with the presence of the Blessed Virgin Mary in the cenacle where they prayed for the outpouring of the Holy Spirit (cf. Acts 1:14). This way, through the centuries of the Church, all apostolates have received their origin and strength through the Blessed Virgin Mary, “Queen of Apostles.”

It is also important to reflect on the connection between the “King and Queen” of the Apostles in relation to the Apostles at the Institution of the Holy Eucharist and at Pentecost. At the Institution of the Holy Eucharist, the Apostles were gathered in the “Upper Room” with Our Lord Jesus Christ – King of the Apostles. While, at the Pentecost (the Descent of the Holy Spirit), the Apostles were gathered in the same “Upper Room” with Our Lady – Queen of Apostles.  This is not to say that the Blessed Virgin Mary takes the place of Our Lord Jesus; rather, she was with the Apostles, united in prayers as their queen and of course, Mother of the Church. Little wonder Pope Leo XIII in his encyclical “Adiutricem Populi” wrote of the Blessed Virgin Mary in the Cenacle: “With a generous heart Mary undertook and discharged the duties of her high but labourious office, the beginnings of which were consecrated in the Cenacle. With wonderful care, she nurtured the first Christians by her holy example, her authoritative counsel, her sweet consolation, her fruitful prayers. She was, in truth, the Mother of the Church, the Teacher and Queen of the Apostles, to whom she confided no small part of the divine mysteries which she kept in her heart.” In consonance, St. John Paul II, teaches us: “The Marian dimension of the Church is an antecedent to that of the Petrine, without being in any way divided from it or being less complementary. Mary Immaculate precedes all others, including obviously Peter himself and the Apostles.  This is so, not only because Peter and the Apostles, being born of the human race under the burden of sin, form part of the Church which is ‘holy from out of sinners,’ but also because their triple functions [—priests, prophets, and kings—] has no other purpose except to form the Church in line with the ideal of sanctity already [designed] and prefigured in Mary.” (Address to the Cardinal and Prelates of the Roman Curia, December 22, 1987; “L’Osservatore Romano,” Dec. 23, 1987). 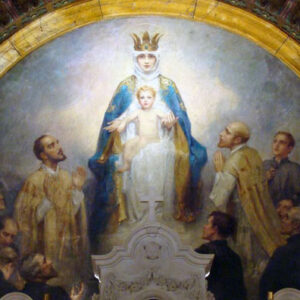 The Blessed Virgin Mary is the queen of the apostles, the missionaries and the evangelizers, because she received the announcement of the angel and immediately got up in a hurry and went to serve her cousin Elizabeth. She is the first Christian, the first missionary and the first apostle. Jesus’ first missionary work was in his mother’s womb – the sanctification of John the Baptist. Put differently, in the Gospel of Luke, Mary becomes a model of faith, the first to hear the saving proclamation. She faithfully believed in that announcement, so she is the first disciple. Not only did she hear the Word of God, but she also assumed, with her own life, fidelity to God’s call. Mary, Queen of the Apostles, is also known as the Mother of all vocations. 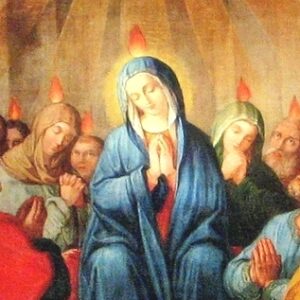 O God, You sent the Holy Spirit upon the Apostles as they were united in prayer with Mary, the Mother of Jesus. May the Queen of Apostles, the same Mother of us all, help us to serve Your Majesty faithfully, and to spread the glory of Your name by word and example. Through Christ our Lord. Amen. 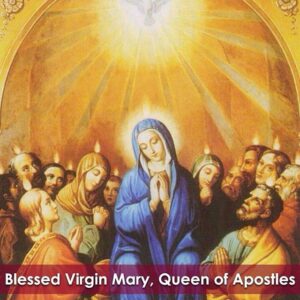 Oh “Queen of Apostles” (Regina Apostolorum), pray for us that we may be made worthy of the promises of Christ. Amen.