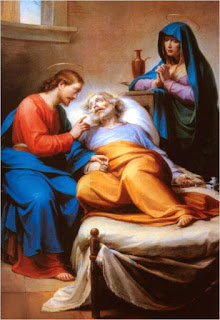 Have
you ever wondered how it feels like, at the end of your journey here on earth
to die in the arms of Jesus and Mary? This was the case of St. Joseph. O, what
a blessed transition into glory…
In all probability Joseph died before
Our Lord began His public career; certainly before the wedding feast at Cana.
By teaching his Son his own trade, he made it possible for Our Lord to provide
for Himself and for Mary till He began His public ministry. The work of Saint
Joseph was
completed.
Tradition has always
believed that it was necessary for Joseph to disappear from the scene or he
would have been an obstacle to the preaching of Christ. Think how confusing it
would have been for Christ to be preaching about His heavenly Father if Joseph
were close at hand! There is every reason to suspect that the multitudes would
have thought He was speaking about Joseph. In order to obviate such
difficulties, the early death of Joseph was convenient. Joseph had to decrease
that the kingdom of God on earth could increase.
And so, some time before
Christ began to preach publicly the good news of salvation, Joseph died,
assisted and comforted by the loving presence of Jesus and Mary, a death that
was later to become the cherished ideal of all Christians.
St. Joseph, pray for us so
that at the end of our lives here on earth, we may, like you, die in the arms
of Jesus and Mary… Amen!