NOVENA TO ST. JOSEPH: DAY 2 (if St. Joseph does not obtain favours from God, then he is not St. Joseph) 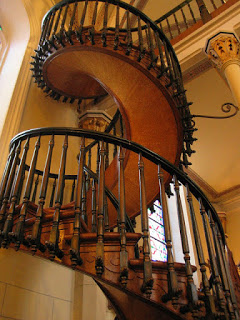 The Miraculous Staircase of St. Joseph

A bit of history

After the United States’ victory in the Mexican-American War, a
vast piece of land in the Southwest was ceded in 1848 to America. The Spanish
town, La Villa Real de la Santa Fe de San
Francisco de Asis (“The
Royal Town of the Holy Faith of St. Francis of Assisi”), founded in 1610,
became the capital of the state of New Mexico, with the new name of Santa Fe.
It was then occupied by Indians, Mexicans and Spaniards.
Simultaneously, a young French-American priest stationed in
Cincinnati, Ohio, Fr. Jean-Baptiste Lamy was appointed the bishop for this new
acquired territory. When he arrived, many priests, resenting him as an
interloper, decided to return to Mexico leaving the new diocese with a few
priests and educators. In response, Bishop Lamy wrote pleas requesting priests,
brothers and sisters for his diocese: “I
have 6000 Catholics and 300 Americans” he explained! The first to
accept his plea were the Sisters of Loretto.

This young congregation, founded in 1812 by Fr. Charles Nerinckx
under the name of “the Little Society of the Friends of Mary under the Cross of
Jesus,” was the first order of sisters created in the United States. When they
named their little log cabin “Little Loretto” in honor of the Holy Family, they
became known as the “Loretto Sisters”.
In 1852, 7 courageous sisters left the safe, secure and civilized
state of Kentucky and began the arduous journey to Santa Fe.
Their trek was through St. Louis, then westward along the Missouri
River to Independence, Missouri. The small group was beset by a cholera
epidemic; the superior, Mother Matilda died, while another sister was too ill
and had to return to Kentucky. The remaining 5 continued their travel by wagon
through bad weather and hostile Indians, a journey of several months that
included struggles and fears, broken axles and wheels, sights of sun-bleached
bones and scorching days. 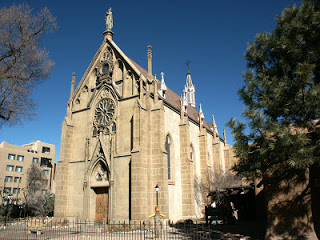 The sisters did not speak Spanish when they arrived; nevertheless,
supported by Bishop Lamy, they started the school the following year in 1853, “for the education of
young ladies”. Through tuitions, donations, inheritances, and
dowries from their families, they built the convent, chapel and school (titled
the Loretto Academy of Our Lady of Light).
Bishop Lamy brought the architect Antoine Mouly from Paris to
build his cathedral. As an architect, he had been involved in the renovation of
the Ste. Chapelle in Paris, France in the early 1800s. When asked by the
Loretto Sisters to design their chapel, he fashioned it in a beautiful Gothic
style after the Ste. Chapelle.
Skilled craftsmen and artisans from France and Italy were brought
to assist the qualified local builders for the bishop’s cathedral. They also
helped with the sister’s chapel. The entire design and craftsmanship were
executed majestically but not at a large expense the sisters could not afford.

The chapel was built with a choir loft but installing stairs was a
problem. During the fourth year of the chapel’s construction the sisters faced
a dilemma. The school was growing with more students each year. A typical
staircase would use too much floor space thereby limiting seating in the
chapel. On another hand, using a ladder to ascend the loft would be terrifying
and unfitting for the sisters and the girls. Mother Magdalen called in many
carpenters to try to build a stairway; but each, in his turn, measured,
thought, and then shook his head sadly saying, “It can’t be done, Mother” (“No se puede, Madrecita”).
These sisters though were ladies of great faith! They decided to
entrust the difficulty to the one they had placed the construction of their
chapel under: St. Joseph. So, sisters and students together began a 9-day novena
to St. Joseph, asking for his intervention. It was not surprising therefore
when on the 9th and final day of the novena, there appeared at the school an
old, gray-haired and bearded man with a donkey and a tool chest; a carpenter
who offered to build the needed staircase. He was hired and proceeded to go to
work.

Answer to a prayer 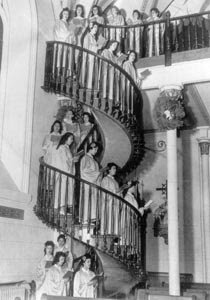 One would not pay an itinerant craftsman until after the job was
completed. Mother Magdalen wrote she didn’t even ask the name of the mysterious
carpenter. During these times it was considered immodest for the sisters and
the girls to carry on a conversation with a male laborer. They just remembered
that the only tools he had were a hammer, a saw and a T square. And he worked
during more than 6 months. When the work was completed, Mother Magdalen went to
pay him, but he had vanished. She went to the local lumber yard to pay at least
for the wood, but they knew nothing of the matter there!

The winding stairway that St. Joseph left for the sisters and their
students is a masterpiece of beauty and wonder. It makes two complete 360
degrees turns. There is no supporting pole up the center as most circular
stairways have. This means that it hangs without support, and the transferred
weight is solely on the base. Until now, no consensus among engineers having
reached to give a scientific explanation.
The short pieces of wood 3 to 5 feet in length were put together
only with hundreds of square wooden pegs used with great precision and
exceptional craftsmanship. There are no nails, screws nor glue. The assembled
structured is comprised of approximately 93 pieces of wood divided amongst 10
for the outside stringer, 8 for the inside stringer, as well as 33 steps and 33
risers.
The perfection of the stringers’ curves is baffling; the wood is
spliced along the sides of the stringers and each piece is perfectly curved.
Another mystery of this staircase was the type of wood used.
Though the treads have been constantly walked on and were used daily by the
sisters and children for over 100 years, nonetheless, only the edges show signs
of wear. The wood also appears not to be native to the state of New Mexico, and
is in fact, an unknown variety.
When the staircase was completed, the carpenter disappeared
without pay or thanks. The Loretto Sisters ran an advertisement in a local
newspaper in search for the man but found no trace of him. They offered a
reward for the identity of the man, but it was never claimed. But Mother
Magdalen and her community of Sisters and students knew that the stairway was
Saint Joseph’s answer to their fervent prayers.
Many were convinced that the humble carpenter was none other than Saint
Joseph himself, as his silent, prayerful labors were precisely the virtues one
would expect of the foster-Father of Our Divine Lord.
One of the most
baffling things about the stairway, however, is the perfection of the curves of
the stringers. The wood is spliced along the sides of the stringers with nine
splices on the outside and seven on the inside, each fitted with the greatest
precision. Each piece is perfectly curved. How this was done in the 1870’s by a
single man with only the most primitive tools is inexplicable to modern
architects. Many experts have tried to identify the wood and surmise where it
came from, but no one has ever been able to give a satisfactory answer to this
mystery. The treads were constantly walked on for over a hundred years since
the stairway was built, but showed signs of wear only on the edges. The wood
was identified as an “edge-grained fir of some sort”, but others say
it is a long-leaf yellow pine, but the hard-wearing wood definitely did not
come from New Mexico. Where the mysterious carpenter got this wood remains a
mystery up to this day. 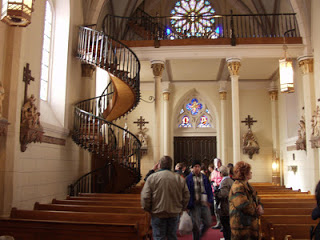 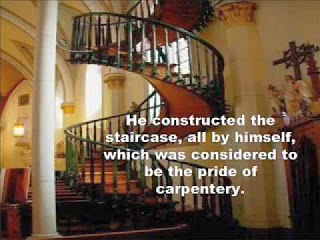 St. Joseph, pray for
us!

Holy Mother Church is always cautious about making statements
concerning things of a supernatural nature. Though nothing definite has been
said about the stairway, everyone is convinced that this was St. Joseph’s
answer to prayers. Devotees of Christ’s Foster Father do not require the
Church’s official judgment to understand that the humble, silent, generous and
exceptional craftsman was St. Joseph himself.
May he help us to ascend, through the imitation of the life of
Jesus to the choir loft of Our Lady to sing eternally with the angels and the
saints the eternal Sanctus to the Trinity!