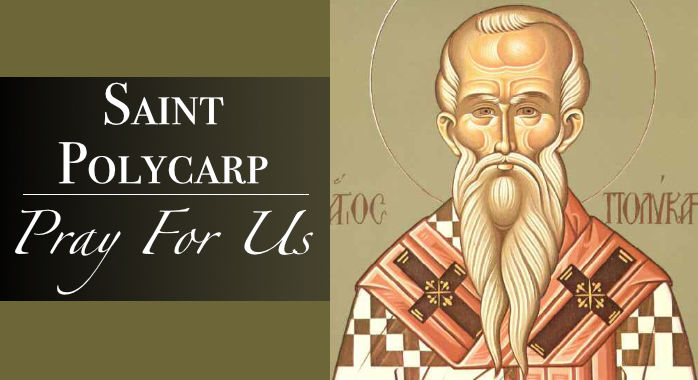 On February 23, the Church celebrates the Memorial of Saint Polycarp of Smyrna. St. Polycarp does not have an official patronage, but he is a great saint to seek intercession from in many circumstances. You can ask St. Polycarp to pray for you if you are facing persecution for your Faith, since he endured persecution for his Faith and was ultimately martyred. Or you can ask him to pray for someone you know who is suffering persecution for their Faith. St. Polycarp is also a great saint to seek intercession from on behalf of Church leaders, since he was a holy bishop who did a lot to combat heresy and to lead the Church well.

Great martyr, Saint Polycarp, make us steadfast witnesses to the truth in word and deed, just as you witnessed to the truth in your own life and death. Through your intercession, make our commitment to our religion of long duration, a life project, enduring until our life of faith concludes with a death of faith. As we devote ourselves to you in this period of nine days, hear the humble prayers we make before God and intercede for us in order that we become beneficiaries of the heavenly graces, especially in this particular need(s) (state your intentions). Grant this, through Christ our Lord. Amen.

A REFLECTION ON THE DEATH OF POLYCARP OF SMYRNA 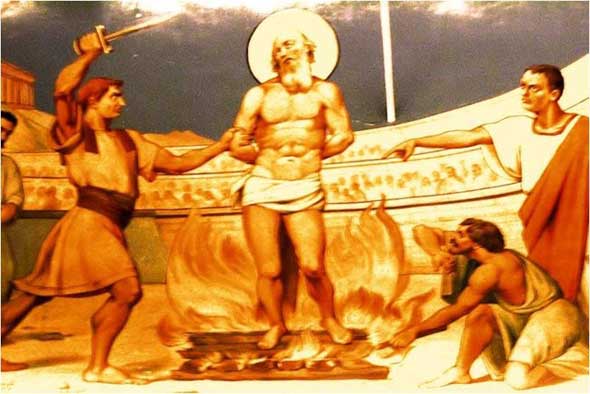 Beloved friends, having read the epistles of St. Polycarp of Smyrna, it is worthwhile at this time to consider the outcome of his life, particularly his death story – the way he gave up his life for the sake of the gospel.

In those days, the news of the martyrdom of Saint Polycarp, Bishop of Smyrna, spread far and wide in his own time, making him as famous in the early Church as he is now. He was martyred around 155 A.D., one of the few early martyrs whose death is verified by documentation so precise that it even proves that he was executed on the exact day of his present feast—February 23. Polycarp was 86 years old when a rash of persecution broke out against the local Church. He waited patiently at a farm outside of town for his executioners to come and knock on his door. He was then brought before a Roman magistrate and ordered to reject his ‘atheism.’ Imagine that! What an interesting twist! The Christian is accused of atheism by the pagan “believer.” Such was the Roman perspective. Christians were ‘atheists’ because they rejected the ancient civic religion which had been believed by everyone, everywhere, and always.

The Roman gods were more patriotic symbols than objects of belief. No one was martyred for believing in them. No one fought over their creeds, because there were no creeds. These gods did for Rome what flags, national hymns, and civic holidays do for a modern nation. They united it. They were universal symbols of national pride. Just as everyone stands for the national anthem, faces the flag, puts their hand over their heart, and sings the familiar words, so too did Roman citizens walk up the wide marble steps of their many-columned temples, make a petition, and then burn incense on the altar of their favorite god.

It required heroic courage for Polycarp, and thousands of other early Christians, to not drop some grains of incense into a flame burning before a pagan god. For the Romans, to not burn such incense was akin to spitting on a national flag (you know how national flags are respected; little wonder it was used by the “EndSars” Protesters in Nigeria; unfortunately, the authorities abused the flag and shot her citizens with the flag). But Polycarp simply refused to renounce the truth of what he had heard as a young man from the mouth of Saint John the Apostle, that a carpenter named Jesus, who had lived a few years to the south of Smyrna, had risen from the dead after His body had been placed in a guarded tomb. And this had happened recently, in the time of Polycarp’s own grandparents!

Polycarp was proud to die for a faith he had adopted through hard-earned thought. His pedigree as a Christian leader was impeccable. He had learned the faith from one of the Lord’s very own Apostles. He had met the famous Bishop of Antioch, Saint Ignatius, when Ignatius passed through Smyrna on the way to his execution in Rome. One of Saint Ignatius’ famous seven letters is even addressed to Polycarp. Polycarp, Saint Irenaeus of Lyon tells us, even traveled to Rome to meet with the Pope over the question of the dating of Easter. Irenaeus had known and had learned from Polycarp when Irenaeus was a child in Asia Minor. Polycarp’s own letter to the Philippians was read in churches in Asia as if it were part of Scripture, at least until the fourth century.

It was this venerable, grey-haired man, the last living witness to the apostolic age, whose hands were bound behind him to a stake, and who stood “like a mighty ram” as thousands screamed for his blood. before he breathed his last, looking up to heaven, he said: “Lord, almighty God, Father of your beloved and blessed Son Jesus Christ, through whom we have come to the knowledge of yourself, God of angels, of powers, of all creation, of all the race of saints who live in your sight, I bless you for judging me worthy of this day, this hour, so that in the company of the martyrs I may share the cup of Christ, your anointed one, and so rise again to eternal life in soul and body, immortal through the power of the Holy Spirit. May I be received among the martyrs in your presence today as a rich and pleasing sacrifice. God of truth, stranger to falsehood, you have prepared this and revealed it to me and now you have fulfilled your promise. I praise you for all things, I bless you, I glorify you through the eternal priest of heaven, Jesus Christ, your beloved Son. Through him be glory to you, together with him and the Holy Spirit, now and forever. Amen.”

When he had said “Amen” and finished the prayer, the officials at the pyre lit it. But, when a great flame burst out, those of us privileged to see it witnessed a strange and wonderful thing – the fire miraculously did not burn him. When his persecutors saw that he was not dying from the fire, they stabbed him to death.

Beloved friends, Bishop Polycarp nobly accepted what he had not actively sought. His body was burned after his death, and the faithful preserved his bones, the first instance of relics being so honored. A few years after Polycarp’s death, a man from Smyrna named Pionius was martyred for observing the martyrdom of Saint Polycarp. In just this fashion links are added, one after another, to the chain of faith which stretches through the centuries down to the present, where we now honour Saint Polycarp as if we were seated within earshot of the action in the stadium that fateful day.

O Lord Jesus Christ, the Son of the Living God, through the intercessions of Your Most-Holy Mother, and the entreaties of the Holy Hieromartyr Polycarp, soften the pains of our souls, take away our pains, and fulfill our desires, that we might newly behold the right hand of Your Saint, awesome in battle and gladsome to his friends. O saintly martyr, please bring my petitions before God Whom you served so faithfully!
—Pause and add your intentions—

Saint Polycarp of Smyrna, pray for us!
Blessing+

Through the intercession of Saint Polycarp of Smyrna, may Almighty God bless you + the Father, and the Son, and the Holy Spirit. Amen.

Thank you St. Polycarp for interceding for me and for the successful completion of this novena. Amen