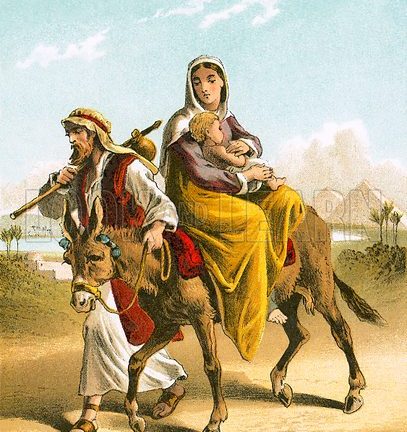 Sufferings, difficulties, homelessness, insecurity, joblessness, etc. could be said to characterize the life of St. Joseph in spite of his trust in divine providence. When Joseph arrived at Bethlehem from Nazareth with his pregnant wife (cf. Lk. 2:1-20), he was obviously a homeless man. He felt insecure and probably ashamed; he had nowhere to stay. The same was the case when, in order to save the life of the Son of God and his Mother and support them (cf. Mat. 2:13-15), he had to flee to a foreign country – Egypt. Needless to say, he was a migrant with Jesus and Mary, a forced migrant, a “political” migrant, exiled, a persecuted “politician”. In Egypt, he had nowhere to put his family and he experienced homelessness; without food, without work, without understanding the language and the foreign way of life. He felt the hardship of looking for a future far from his land, and inasmuch as the motivation was to save the Child and His Mother, he experienced poverty, insecurity, and doubt. However, with the sweat on his forehead and his work, he later managed to give dignity to his family. Joseph of Nazareth went through all these experiences, which many refugees go through bitterly today.

The family of Jesus, Mary and Joseph is the archetype of every refugee family. This family remains for all times and all places, the model and protectors of every migrant, pilgrims and refugees of whatever kind who, whether compelled by fear of persecution or by want, is forced to leave their native land, parents and relatives, friends, in seeking a foreign soil and better life. Unfortunately, today, there are millions of refugees and displaced persons who are constantly migrating for different reasons – especially for economic motives, political motives, motives of war, etc. Migration generates widespread poverty, unemployment, homeless people with no certainty and future, in addition to despair and hunger; such that we can only imagine the great difficulties in the life of a refugee and migrant. Amidst these difficulties, St. Joseph becomes a model of hard work, perseverance and total trust and dependence in divine providence. He remains a great icon and close to our migrants, the homeless, political refugees, and unemployed.

Above all, through the difficult experiences of St. Joseph, we are called to show see Christ in every migrant and refugee, and show love to them. Pope John Paul II (in his address to the Participants in the Assembly of the Council of the ICMC, 12 November 2001) invites us to an ever deeper awareness of the mission of the Catholic Church: “to see Christ in every brother and sister in need, to proclaim and defend the dignity of every migrant, every displaced person and every refugee. In this way, assistance given will not be considered alms from the goodness of our heart, but an act of justice due to them.”

Prayer: O Saint Joseph, our Lord Jesus Christ and His Blessed Mother were with you throughout your migration from place to place in search of refuge, safety and security; grant us the grace to always see our Lord Jesus Christ in the lives of our suffering brothers and sisters exiled from their homeland in seeking refuge in another land; and through your powerful intercession, may refugees and migrants find trust, solace and support in divine providence. Amen.