NOVENA TO SAINT JOSEPH – DAY 7: “JOSEPH’S ROLE IN THE EDUCATION OF JESUS: AN EXAMPLE TO MODERN-DAY PARENTS” 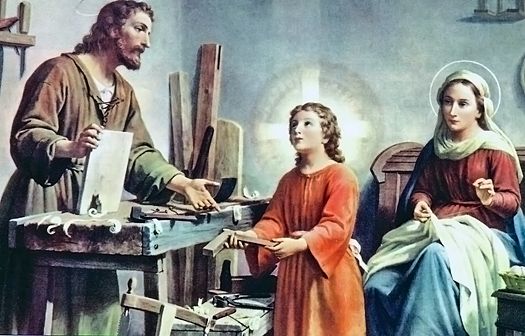 In Jesus’ time, the father was responsible for the basic education of his children, which included reading, at least, the Scriptures, and inculcation of moral values. This is because, in Hebrew, family means “father’s house” (Bêt’Āb). This leads us to understand the importance of Saint Joseph in the family context. Probably, the sagacious and awesome parables narrated by Christ in the gospels must have been presented by Joseph, during His childhood and adolescence, as a way of explaining Mosaic traditions and laws. Identifying Jesus as a Carpenter in Mark 6:3 is a clear example of Joseph who educated and handed over the carpentry trade to his Son. These (among other examples) are clear cases of a loving and responsible father (together with his supportive spouse, the Blessed Virgin Mary) who trained their child in the ways of the Lord in becoming a responsible citizen of the Jewish society.

Unfortunately, modernism has led to a relentlessness of the collapse of parenting. In an era of modern parenting, raising children has become significantly more time-consuming and expensive for parents. It is a truism that the average parent today spends more time with their smartphones and other gadgets than with their children. To worsen the matter, they purchase a smartphone and give their children at such an early stage, creating an avenue for individualism in the family. As a result, parents find it difficult to give their children the basic domestic education, instilment of good behaviour, and other moral values; they believe it can be learned at schools, Church, etc. They seem to have forgotten that “Charity begins at home”. This exposes the children to the danger of learning the wrong thing on their own or via peer pressure, not to mention the danger of stumbling across pornography and the likes in the virtual world.

Dear parents, we can learn from St. Joseph by giving ample attention and basic education to our children in our modern epoch. Charity will always begin at home.

Prayer: Lord God, may our devotion to St. Joseph enable us to imitate his outstanding virtue of parental education in order to build our families in raising God-fearing children for the good of the Church and society. Amen.