MY FELLOW CHRISTIANS, LET US PUT AN END TO THIS PICTORIAL REPRESENTATION! 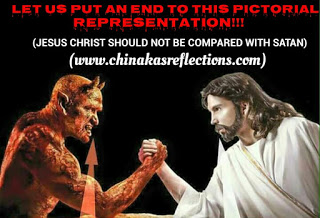 MY FELLOW CHRISTIANS, LET US PUT AN END TO THIS PICTORIAL REPRESENTATION!
Over and over again, I keep seeing pictorial representations of a contest between Jesus and the satan (especially across the social media), in which satan is often depicted as challenging Jesus that he would make sure many people ignore the post, while Jesus, on the other hand, is depicted as responding to satan that His children will type Amen and share… This often compels thousands of gullible Christians to share and type Amen to the post; as if Jesus’ victory against satan depends on their number of “AMENs”…
Dear friends in Christ, this is injudicious, and an act of PURE IGNORANCE. Little wonder the Holy Book says: “My people perish for lack of knowledge” (Hosea 4:6). Ignorance is a deadly disease that has mixed up and penetrated many facets of our beliefs, and the gullible ones, often times, are the victims.
Jesus Christ is not the direct opposite of satan; put differently, Christ should not be compared to satan. Jesus is God (Jn. 1:1), and through Him, ALL THINGS came into being, NOT one thing came into being EXCEPT through Him (Jn. 1:3). St. Paul reemphasizes this reality in his letter to the Colossians – “…in Him all things were created: things in heaven and on earth, visible and invisible, whether thrones or powers or rulers or authorities; all things have been created through Him and for him”. (cf. Col 1:16). This certainly shows that Jesus Christ is the Lord and Master of satan himself, for He created satan “ab initio” as angel Lucifer (morning star); but unfortunately for him, he was expelled from heaven. The story of how Lucifer was cast from Heaven reminds us of the power of God. Despite a revolt in the paradise He created, God proved that He is always and will always be stronger. Therefore, why should we represent or support the idea of placing Jesus and satan on the same plane in contesting for a winner? THIS IS REALLY ABSURD!
Let me reiterate again, we cannot compare the power of Satan’s evil versus the power of God’s love. Despite good and evil being opposites, GOD AND SATAN ARE NOT. To say that God and Satan are opposites is to say that they are equal forces going against one another. This is certainly the deceptive work of satan. The book of Revelation identifies satan as the deceiver who has led the world astray (Rev 12:9), and Christ speaks of satan/devil as a liar and the father of lies (Jn. 8:44). satan makes us believe that he can contend with God, he goes a long way to infuse this idea in the hearts of people – that was how this picture above came about.
Dear friends in Christ, we cannot give satan that kind of credit! God is mightier than any evil Satan can come up with. Don’t listen to the lies. If at all we must look for an opposite force against satan, then it should be angel Michael, since satan was once an angel. The book of Revelation explains this; we were told that war broke out in heaven, and Michael the archangel, and other angels fought the “dragon”. The dragon fought back with his angels, and in the end, they were defeated. (cf. Rev 12:7). Even Archangel Michael defeated satan, how much more Jesus Christ who is God Himself? Therefore, our Lord and Master, Jesus Christ is too ALMIGHTY to fight or contest with satan, He simply sends his angels, and the task is swiftly carried out.
Dearest friends in Christ, let us be guided accordingly and not be carried away easily with quack and deceptive ideas in relation to our faith. In addition, kindly disregard any post compelling you to comment or share in the name of being a Christian, and that if you do not share, something bad may happen to you or God would not bless you… That kind of post is also dangerous and has an evil intention. If you truly seek a favour from God, kindly pray to Him, and not by sharing such posts or commenting “Amen” to posts on the social media. Let us be guided accordingly. A word, they say, is enough for the wise…
To correct this ugly pictorial representation between Jesus and satan, kindly share this piece with your fellow Christians.
SHALOM!