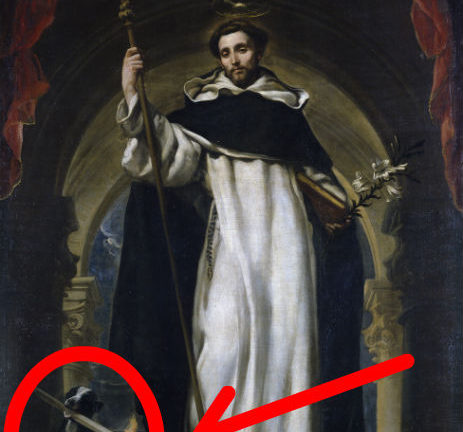 1. He was a well-educated man…
2. He believed that a strong intellectual foundation would allow a man to preach more convincingly, and therefore convert more people to the faith…
3. Sequel to this, he established the Dominican Order, and chose the motto “laudare, benedicere, predicare” (to praise, to bless, to preach).
4. A central tenet of the Order was to incorporate intellectual pursuits with the needs of everyday people… (To fight against the heretics of his time).
5. My love for this religious order knows no end. Their spirituality and apostolate (intellectual pursuits), together with the great scholars of the Order I’d come in contact with, made me fall in love with their lifestyle (being baptized and brought up at St. Dominic’s parish, Yaba).
6. Did you notice the dog close to him bearing a tough in its mouth? The story goes thus:
Once upon a time, before the birth of Saint Dominic, his parents struggled with infertility for a while. As a result, his mother made a pilgrimage to the Abbey of Santo Domingo de Silos in Spain when she dreamt that a dog jumped from her womb holding a torch and set everything around them on fire. Soon after, she conceived a son with her husband and named him after the 11th century St. Dominic of Silos, for whom the abbey she had visited had been named.
However, with the imagery of the dog and the name Dominic, we can play on words here in Latin.
Although Dominic called his order the “Order of Preachers” (OP), it was later known as the Dominicans; in Latin, this means “Dominicanus”, which is very similar to *domini canis*, which translates itself in English as “dog/hound (canis) of the Lord (Domini).”
Given the order’s charism for zealous preaching of the Gospel, the story of the dog and the play on words seemed fitting! So, to this day, the Dominicans are nicknamed “Hounds of the Lord.”
O Father Dominic, thou has contributed immensely to the Church, and a host of saints have flourished from your Order:
St. Catherine of Siena;
St Louis de Monfort;
Pope St. Pius V;
St. Martin de Porres;
St. Thomas Aquinas (the angelic Doctor and theologian), among others.
Strengthened by thy prayers, may the Church continue to grow intellectually with able young men and woman ever ready to defend the faith… Amen.
Blessed Father Dominic; pray for us!!!
Happy solemnity to all my Dominican friends on Facebook!
Happy feast day to y’all!