MAY DEVOTION: UNDERSTANDING THE MARIAN TITLES IN THE LITANY OF LORETO. DAY 6: “MOTHER MOST CHASTE” 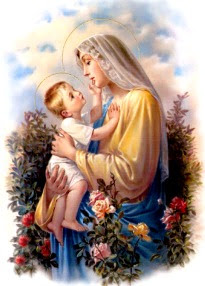 Meditating on the litany of our Lady, today, we arrive at another fundamental human value under the invocation: “Mother Most Chaste”, in which Mary is for us a model of chastity. This title of our Blessed Virgin Mary surrounds her virginity, immaculateness, purity and holiness. When we invoke this special title of hers, what do we mean? How does it help us in our daily spiritual journey? In fact, what does it mean to be chaste?

The concept of chastity is one that is used sparingly, little wonder it is not well understood by some young people. I remember when I made my First Profession of the Evangelical Counsels (years back) at the OSJ Formation House, Ibadan, Nigeria, two of my invited guests asked me to explain to them, the “vow of chastity” which I had professed. from my interaction with them, I came to discover that it is not a common term employed in secular society. Chastity is not just something we should not do, but exactly a virtue that we must cultivate in our thoughts and desires. Put differently, eliminating all malice, sexual sins, impurities, infidelities, etc., is good, but not sufficient to be chaste; something more is needed. Chastity is love lived in the right way. To be chaste is to respect the dignity of the body, mind and heart. Chastity enables a person to fellowship with God through his body, the true ‘temple of the Holy Spirit’ (1Cor 6:19). The Catechism of the Catholic Church (CCC) defines chastity as “the successful integration of sexuality within the person and thus the inner unity of man in his bodily and spiritual being. Sexuality, in which man’s belonging to the bodily and biological world is expressed, becomes personal and truly human when it is integrated into the relationship of one person to another, in the complete and lifelong mutual gift of a man and a woman. The virtue of chastity, therefore, involves the integrity of the person and the integrality of the gift.” (CCC #2337). It follows, then, that chastity allows us to see sex as a wonderful gift that the Creator left us so that we could complete his work generating and caring for life charitably. Using this gift only for one’s own benefit, as in prostitution, rape, masturbation and pornography, etc., goes contrary to the Creator’s gift, saddens the heart and causes deep frustration. Chastity, in my opinion, is the sister of happiness.

Thus, Invoking the Blessed Virgin Mary as “Mother Most Chaste”, leads us to meditate on her mysterious virtue, as one who was chosen to be a model of a life lived always in the most complete obedience to God and of her strong will, even before the mystery of the Annunciation, and later as the Mother of the Son of God. It also helps us to reflect on the sacredness of our bodies as the temple of the living God, of which Mary was the first to harbour that God in bodily form. Therefore, through reflecting on the chastity of the Blessed Virgin Mary, we come to see that it is the vocation of all the baptized, not only that of priests and religious. In this regard, the CCC explains in the following articles: #2348: “All the baptized are called to chastity. The Christian has ‘put on Christ,’ the model for all chastity. All Christ’s faithful are called to lead a chaste life in keeping with their particular states of life. At the moment of his Baptism, the Christian is pledged to lead his affective life in chastity.” In #2349, we learn that: “People should cultivate [chastity] in the way that is suited to their state of life. Some profess virginity or consecrated celibacy, which enables them to give themselves to God alone with an undivided heart in a remarkable manner. Others live in the way prescribed for all by the moral law, whether they are married or single. Married people are called to live conjugal chastity; others practise chastity in continence: There are three forms of the virtue of chastity: the first is that of spouses, the second that of widows, and the third that of virgins. We do not praise any one of them to the exclusion of the others. . . . This is what makes for the richness of the discipline of the Church.” In addition, #2350 reads: “Those who are engaged to marry are called to live out chastity in continence. They should see in this time of testing a discovery of mutual respect, an apprenticeship in fidelity, and the hope of receiving one another from God. They should reserve for marriage the expressions of affection that belong to married love. They will help each other grow in chastity.”

Apparently, the Catechism of the Catholic Church outlines lust, masturbation, fornication, pornography, prostitution, rape, adultery, etc., as the sins against chastity. Hence, these could be avoided with much struggle and prayer in general, and particularly by having recourse to the “Mother Most Chaste”. Therefore, in the face of temptation, it will be very useful to turn our inner gaze to the Blessed Virgin Mary and prayerfully invoke her wonderful title: “Mother Most Chaste, pray for us!” For next to our Lord, there is never anyone who loves chastity like her. We can see her love for chastity when the angel appeared and announced to her that she would be the mother of the Son of God, and, in amazement, she asks, “How will this happen since I don’t know a man?” (Lk. 1:34). Mary’s reaction to the angel particularly surprises me, since Scripture tells us that she was already betrothed to Joseph at the time of the angel’s visit (cf. Lk. 1:27); thus, the thought of how she would be the Mother of the Saviour while still retaining her virginity was propelled by her virtue of chastity.

Therefore, my dear friends in Christ, in a world faced with the growing culture of promiscuousness, pornography among the youths and married vis-à-vis the internet and consequent masturbation; in a world where parents find it difficult to domestically teach their children sexual education, such that they negatively become influenced by their peers; in a world where cases of rape, incest, divorce and remarriage, etc. are high; above all, in a world where the dignity of the body cannot be upheld and love is not properly lived in the right way, we turn to our Blessed Mother and invoke her special title: “Mother Most Chaste”, asking her to keep our bodies, minds, and hearts pure and free from all faults, so that aided by God’s grace, we may imitate her examples by avoiding every occasions of sin that may endanger our vocation to chastity. Amen