MAY DEVOTION: UNDERSTANDING THE MARIAN TITLES IN THE LITANY OF LORETO – DAY 29: “TOWER OF IVORY” (TURRIS EBURNEA) 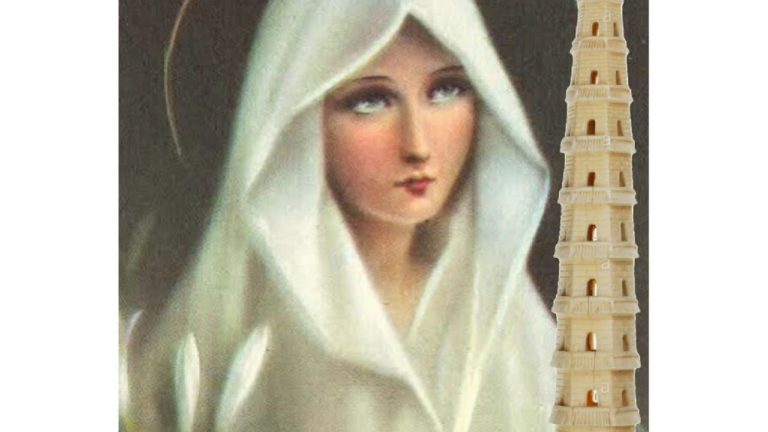 I want to believe that at this point, calling the Blessed Virgin Mary a “Tower” is not a ‘difficult riddle’ to grapple with after reading yesterday’s reflection on “Tower of David.” We have already seen how important the tower was to the cities built in ancient biblical times; this is important in helping us understand the next title we are about to unravel today being the twenty-ninth day of our May Devotion: “Tower of Ivory” (Latin, Turris Eburnea). How can we understand this title?

The invocation, “Tower of Ivory” has its source of inspiration in the biblical books of the Old Testament. For those who wonder why we refer to the old testament books in reference to Our Lady who apparently existed in the New Testament times, the answer is clearly explained by the Church. According to the Catechism of the Catholic Church, “The Church, as early as apostolic times, and then constantly in her Tradition, has illuminated the unity of the divine plan in the two Testaments through typology, which discerns in God’s works of the Old Covenant prefigurations of what he accomplished in the fullness of time in the person of His incarnate Son (…) Early Christian catechesis made constant use of the Old Testament. As an old saying put it, the New Testament lies hidden in the Old and the Old Testament is unveiled in the New.” (CCC #128-129). Therefore, in relation to the Marian title, “Tower of Ivory,” we navigate from the book of the Song of Songs (7:5). A hasty reader would be confused when reading this chapter; a text attributed to King Solomon, which sings human love in a naked and raw way. The referred verse reads: “Your neck is an ivory tower. Your eyes, the pools of Heshbon, by the gate of Bath-Rabbim. Your nose, the Tower of Lebanon, sentinel facing Damascus.” Great Christian mystics like St. John of the Cross, used these verses a lot as a way of describing the mysteries of God’s love in a very profound way. In the book of Song of Songs, human and divine love are inseparably united. It is very good to know that the oldest tradition of Christian prayers does not deny human love as a way of reaching God. Inasmuch as many people erroneously imagine that holiness or mystique requires us to deny human beauty, the holy sensuality and sexuality lived in the right way and at the right time; nonetheless, our humanity is a way of living out holiness perfectly. Knowing all of this, we could open our Bible and read the “love poem” of the Song of Songs. The beauty of the beloved is described with metaphors quite subtle for that time; although, some are old fashioned. For instance, imagine a man telling his lover that her neck looks like a tower, she would certainly not be happy. However, in King Solomon’s time, some things were as beautiful as a tower. The poem metaphorically says, “Her neck is an ‘Ivory Tower.’” Where could this comparison have come from?

In the first book of Kings, chapter 10, we see the visit of the Queen of Sheba to King Solomon. She was impressed by the wisdom and wealth of the great king of Israel and presented him with a large quantity of perfumes and precious stones. The king, in turn, gave a large number of gifts to the visiting queen. In this same chapter, when describing Solomon’s riches and power, the Bible says that he “had a great ivory throne made, overlaid with fine gold” (1Kgs 10:18). Ivory and gold were what could be most beautiful and rich to live up to Solomon’s power. Also, at that time, no one, however rich and powerful, could make an entire tower out of ivory, not even Solomon. Therefore, comparatively referring to the “Ivory Tower” in relation to the neck of his “beloved” could be a way of describing the beloved as surpassing earthly worth/beauty and wealth. Put differently, having a neck as a tower made of ivory transcends the pulchritudinous lane, demonstrating the essence of one’s value surpassing what money/riches/wealth could acquire.

Likewise, if our Blessed Mother could be described as “Full of grace,” and that she was conceived by the power of the Holy Spirit who descended and covered her with his “shadows” at the incarnation, and of which was said to her “Blessed art thou among women…” etc., then, she perfectly suits the comparison of having a treasured “neck” of “Tower of Ivory,” and even more. She is the beloved treasure of the Father of whom we can allegorically ascribe the passage of Song of Songs (7:5)

Dear friends in Christ, the Blessed Virgin Mary is a great treasure for us, her children. It is possible to survive without the beauties, flamboyancy, wealth and treasures of this life (at least the global pandemic has shown us that), but we cannot live without the treasures that we have in heaven. Therefore, invoking our Lady as “Tower of Ivory” reveals that she is much more important than the throne of kings. Her wealth is not made of precious stones or gold, because she gave us the King of kings, the Lord of lords: Jesus!

Above all, if the Blessed Virgin is said to have a neck like an “Ivory Tower” as described by her Beloved (God); then, we must affirm that Jesus is the head of the Body, that is the Church, Mary is the neck, that is through which the Saviour came to us, the Body.

Lord Jesus Christ, may our devotion to the Blessed Virgin Mary, the “Tower of Ivory” enable us to approximate You – the Head, at the top of the Ivory Tower. Amen

Oh “Tower of Ivory” (Turris Eburnea), pray for us that we may be made worthy of the promises of Christ. Amen.

Help us, dearest Lady, to see beyond the riches of this world and long after those of heaven. Amen.

Dearest Lady, Tower of Ivory, pray for us. Amen.