MAY DEVOTION: UNDERSTANDING THE MARIAN TITLES IN THE LITANY OF LORETO – DAY 14: “MOTHER OF THE CHURCH” 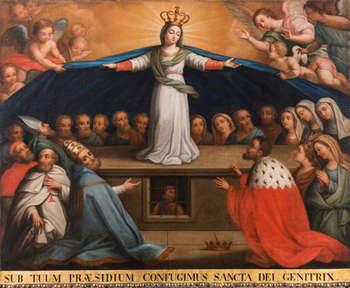 For some days, we have been reflecting on the titles surrounding the “Motherhood” of Mary as invoked in her litany. Having reflected on two wonderful Marian titles, lately: “Mother of our Creator,” and “Mother of our Saviour” (apparently and directly pointing to Mary’s relationship with her Son, our Lord, Jesus Christ); today, being the fourteenth day of our Marian devotion in May, arrive at the last title concerning the Motherhood of Mary: “Mother of the Church.” What does it mean to invoke the Blessed Virgin Mary as the “Mother of the Church?” What relationship does she have with the Church founded by Christ? How come is she the “Mother”?

The Church, since the earliest times (as far back as the fourth century A.D), has always venerated Mary as Mother of the Church, although this title was solemnly declared in 1964 by Pope Paul VI. There is a logical reason for this, she is the Mother of Jesus, head of the Church, and the Church is the mystical Body of Christ. For this reason, Mary is the mother of all who were born through Christ. During the Second Vatican Council, Pope Paul VI solemnly declared that: “Mary is Mother of the Church, that is, Mother of all the Christian people, both of the faithful and of pastors” (November 21, 1964). On June 30, 1968, in the Creed of the People of God, Pope Paul VI repeated this truth even more strongly: “We believe that the Most Holy Mother of God, New Eve, Mother of the Church, continues her maternal mission in Heaven in relation to the members of Christ, cooperating in the birth and development of the divine life in the souls of the redeemed.” The Dogmatic Constitution Lumen Gentium confirms that: “By reason of the gift and role of divine maternity, by which she is united with her Son, the Redeemer, and with His singular graces and functions, the Blessed Virgin is also intimately united with the Church. As St. Ambrose taught, the Mother of God is a type of the Church in the order of faith, charity and perfect union with Christ. For in the mystery of the Church, which is itself rightly called mother and virgin, the Blessed Virgin stands out in eminent and singular fashion as exemplar both of virgin and mother” (L.G. #63). In this way, we see Mary’s clear connection with the Church. It is such an intimate connection that we cannot read the history of salvation without relating it to the person of the Virgin Mary.

By invoking the Blessed Virgin Mary as “Mother of the Church”, we call to mind her presence and importance right from the primitive Church. The presence of the Virgin Mary is so strong and inseparable from the mystery of Christ and the Church, that Paul VI in his speech of November 21, 1964, stated that: “Knowledge of the true Catholic doctrine about the Blessed Virgin Mary will always remain a key for an accurate understanding of the mystery of Christ and the Church.” To know Mary “according to Catholic doctrine” is to know Jesus and the Church because Mary was a key, indispensable part of God’s plan for the Redemption of humanity. “In the fullness of time, God sent his Son, born of a woman, to receive the adoption of children” (Gal 4: 4).

Invoking the Blessed Virgin Mary as the Mother of the Church is to understand her as the ‘image and likeness of God’ from the anthropological point of view; understood as a human model that comes closest to the true image and likeness of God. Thus, “by her belief and obedience, not knowing man but overshadowed by the Holy Spirit, as the new Eve she brought forth on earth the very Son of the Father, showing an undefiled faith, not in the word of the ancient serpent, but in that of God’s messenger. The Son whom she brought forth is He whom God placed as the first-born among many brethren (Rom. 8:29), namely the faithful, in whose birth and education she cooperates with maternal love.” (Lumen Gentium, #63).

By speaking of the Blessed Virgin Mary as “Mother of the Church,” we see in her, an example of one who hears the Word of God and keeps it. Interesting Pope Paul VI, who brought about the official title of ‘Mother of the Church’, developed the theme in the Apostolic Exhortation on the ‘Cult of the Virgin Mary,’ speaks of her as a Model of those who hear and accept the Word of God with faith. This is a specific mission of the Church: ‘to listen, accept, proclaim, venerate the word of God, distributes it to the faithful as the Bread of Life’ (Marialis Cultus, #17). Likewise, Lumen Gentium affirms: “By receiving the Word of God in faith becomes herself a mother. By her preaching she brings forth to a new and immortal life the sons who are born to her in baptism, conceived of the Holy Spirit and born of God.” (L.G. #64)

By addressing the Blessed Virgin Mary as the “Mother of the Church,” we see in her a model of prayer. In explaining this, Pope Paul VI affirms in three ways: First, “Mary is also the Virgin in prayer. She appears as such in the visit to the mother of the precursor when she pours out her soul in expressions glorifying God, and expressions of humility, faith and hope. This prayer is the Magnificat (cf. Lk. 1:46-55), Mary’s prayer par excellence, the song of the messianic times in which there mingles the joy of the ancient and the new Israel” (Marialis Cultus, #18). Quoting St. Irenaeus, the Pope continues, “‘In her exultation, Mary prophetically declared in the name of the Church: My soul proclaims the glory of the Lord…’ And in fact, Mary’s hymn has spread far and wide and has become the prayer of the whole Church in all ages. At Cana, Mary appears once more as the Virgin in prayer: when she tactfully told her Son of a temporal need she also obtained an effect of grace, namely, that Jesus, in working the first of His ‘signs,’ confirmed His disciples’ faith in Him (cf. Jn. 2:1-12). Likewise, the last description of Mary’s life presents her as praying. The apostles ‘joined in continuous prayer, together with several women, including Mary the mother of Jesus, and with his brothers’ (Acts 1:14). We have here the prayerful presence of Mary in the early Church and in the Church throughout all ages, for, having been assumed into heaven, she has not abandoned her mission of intercession and salvation. The title Virgin in prayer also fits the Church, which day by day presents to the Father the needs of her children, “praises the Lord unceasingly and intercedes for the salvation of the world.” (Marialis Cultus, #18)

Undoubtedly, Christ is the head of the Church, (cf. Eph 1:22, Col. 1:18) we are its members, (cf. 1 Cor. 12:27). Therefore, if Mary is the Mother of Jesus the head, she must also be the Mother of her members. Therefore, Mary is the Mother of all men by the grace of Christ the Redeemer. Owing to her remarkable importance which cannot be overemphasized, Pope Francis decreed that the Memorial of the Blessed Virgin Mary, ‘Mother of the Church’ be inserted into the Roman Calendar on the Monday after Pentecost (also known as Whit Monday) and to be celebrated every year. The decree was signed on 11 February 2018 (the Memorial of Our Lady of Lourdes, at the 160th anniversary of the Lourdes Apparitions) and issued on 3 March 2018.

O Mother of the Church,  at this critical time when Church structures are closed as a measure to curb the spread of COVID-19, we beseech you to come to our aid for an end of the pandemic. At this difficult time when receiving the Sacraments seems quite difficult for the members of the Church, we beseech you to intercede for us to Christ your Son, the Head of the Church. We ask you, o Mother to continually guide and strengthen the Holy Father aright in all his dealings, that he may lead and pastor the Church in accordance with the Will of God. We also pray for all other Bishops, Priests, Deacons, and the lay faithful, that by constantly trusting in your maternal care and persevering in the faith, we may come to be united with the Triumphant Church (the heavenly Jerusalem) at the last day. Amen.

Oh Mother of the Church, pray for us that we may be made worthy of the promises of Christ. Amen.