MAY DEVOTION: UNDERSTANDING THE MARIAN TITLES IN THE LITANY OF LORETO. DAY 2: “HOLY MARY”; HOLY MOTHER OF GOD”; “MOTHER OF CHRIST” 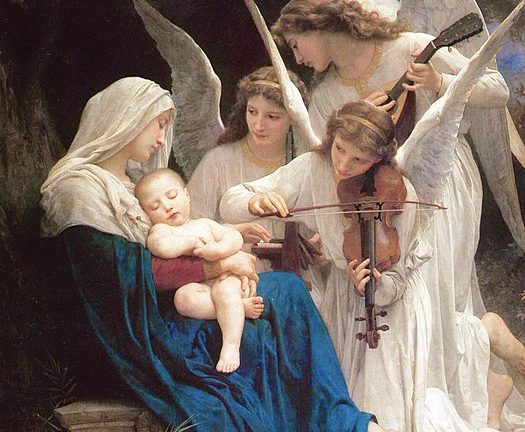 Under the first four stanzas of the Litany of our Lady of Loreto are the phrases: “Holy Mary”, “Holy Mother of God”, “Mother of Christ”. Today, we shall reflect on these three titles of Mary due to their similarities.

First, she is addressed as Holy Mary. Mary’s holiness corresponds to the biblical passage of the Annunciation “Full of Grace”. Some versions of the bible indicate, “Highly favoured daughter”. However, turning to the original Greek version of the Bible, in Luke 1:28, we see “Kecharitomene”. KECHARITOMENE is a PERFECT PASSIVE PARTICIPLE of the verb “CHARITOO”. This means, “to fill or endow with grace.” This indicates that Mary was graced in the past and with continuing effects in the present. Therefore, the grace Mary enjoyed was not a result of the angel’s visit. In fact, we Roman Catholics hold that it extends over the whole of her life, from the very moment of her conception and onwards. Hence, Mary can be said to have been in a state of sanctifying grace from the first moment of her existence, and by this very fact, she is said to be Holy.

Now, this Holy Woman is given the News of her selection by God to be the Mother of the Son of God – Jesus Christ (who is also God): ‘Mary, do not be afraid; you have won God’s favour. Look! You are to conceive in your womb and bear a Son, and you must name him Jesus. He will be great and will be called Son of the Most High’ (Luke 1:30-32). This reality becomes clearer when Mary entered Zachariah’s house, Elizabeth filled with the Holy Spirit exclaims: “But why am I so favoured, that the Mother of my Lord should come to me?” (cf. Luke 1:43). Hence, the title “Mother of God”. She is Mother of God precisely because Christ born of her is God, the Second Person of the Holy Trinity – the Eternal Word of God; and John tells us that this Word became flesh and dwelt among us (cf. Jn. 1:14). Thus, in the one person of Jesus, we see two natures, the nature of God and the nature of Man. Therefore, when Mary gave birth, she did not give birth to one nature (man), she gave birth to One, divine Person (who has both the nature of God and the nature of man). To deny this essential truth of the faith, as the Council of Ephesus (A.D. 431) declared, is to cut oneself off from full communion with Christ and his Church. The real problem with denying Mary as Mother of God and affirming Mary to be only the mother of the man Christ Jesus is that in doing so, one invariably either denies the divinity of Christ (as the fourth century Arian did), or one creates two persons with regard to Jesus Christ. Either error results in heresy as clearly expressed “Patrology”.

The Council of Nicaea (325) and Constantinople (381) dealt decisively with the Arian heresy. The Arian Heresy, rather than teaching the TRUTH that Christ is One divine person with two natures—one human, and one divine— hypostatically unified, or joined together, It teaches that Christ is two persons with a merely moral union, which is WRONG. To support the fact that Christ is one person with two natures, the Bible declares to us, “In HIM the whole fullness of DEITY dwells BODILY” (Col. 2:9). And, “In HIM all things were created, in heaven and on earth, visible and invisible” (Col. 1:16). Nowhere do we read In THEM; we only read of HIM, the divine Person, Jesus Christ, our Lord.

Those who oppose this doctrine may raise another objection, saying: “If God is Trinity, and Mary is the Mother of God, would that not mean Mary is the Mother of the Trinity?” No! Actually, it does not apply. Article #495 of the Catechism is very clear that Mary is the only Mother of the Second Person of the Blessed Trinity because neither the Father nor the Holy Spirit is incarnate. Simple enough. But the problem here may be deeper than just a confusion of persons within the Godhead. The error that may come to mind is: “Even if Mary is only the Mother of the Second Person of the Blessed Trinity, Jesus is just as eternal as the other two divine Persons are… Thus, in order to be His Mother, Mary would have to be equally as eternal.” This is wrong to conceive because it distorts the idea of the Trinity, making it a Quadrinity. Just as the Ark of the Old Covenant was the befitting dwelling place of God, it doesn’t mean that the Ark was as Eternal as God. The root of this “Quadrinity” problem is a false understanding of what is meant by Mary’s true “motherhood” and perhaps a false understanding of what is meant by “motherhood” in general. Let us take a proper look at what motherhood is by a simple analogy: For example, I am the son of my mother. However, this does not mean she is the source of my immortal soul. God directly and immediately created my soul/spirit as He does with every human being, and this soul must return to him at death (see Eccl. 12:7). However, we cannot conclude then that my mother is merely “the mother of my body.” She is my mother, period! She did not give birth only to a body; she gave birth to a human person who is a body, soul and spirit composite, and that person is me. Analogously, though Mary did not provide Jesus with either his divine nature or his immortal human soul, she is still his mother because she did not give birth to just a body, or a soul, or nature, she gave birth to One Person (Jesus Christ), and that One Person is God. The conclusion to the whole matter is inescapable: “If Jesus Christ is One, Eternal and Unchangeable Divine Person—God—and Mary is his Mother, then Mary is the Mother of that One, Eternal and Unchangeable God.

Therefore, the Catholic Church drives home the teaching better: “Called in the Gospels “the mother of Jesus”, Mary is acclaimed by Elizabeth, at the prompting of the Spirit and even before the birth of her Son, as ‘the mother of my Lord’. In fact, the One whom she conceived as man by the Holy Spirit, who truly became her Son according to the flesh, was none other than the Father’s eternal Son, the Second Person of the Holy Trinity. Hence, the Church confesses that Mary is truly ‘Mother of God’” (CCC #495)

Thank you Fr for this very rich reflection. Please we need the share button to be able to share this rich reflection on other social media handles. This message needs to get to the ends of the earth.

Beautiful write up padre, kudos to you. More power to your elbow.

What a beautiful May Devotion I am having despite the lockdown. Soooo rich. God bless you Padre Cjay