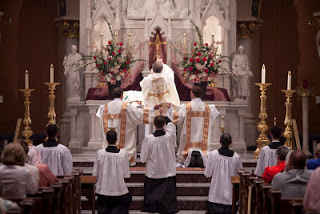 Cardinal Robert Sarah (prefect of
the Congregation for Divine Worship) on July 5, 2016 during his opening address
at the “Sacra Liturgia” conference being
held in London appealed to priests throughout the world to begin saying Mass
facing the same direction as the faithful, suggesting that the season of Advent
would be an opportune time to do so. He began by recalling that “God, not man,
is at the centre of Catholic liturgy,” and that “we must be utterly clear about
the nature of Catholic worship” to be able to read correctly and implement
faithfully (cf. Sacrosanctum
Concilium). The words of the Guinean Cardinal are as follows: “Dear
Fathers, I ask you to implement this practice wherever possible, with prudence
and with the necessary catechesis, certainly, but also with a pastor’s
confidence that this is something good for the Church, something good for our
people. Your own pastoral judgement will determine how and when this is
possible, but perhaps beginning this on the first Sunday of Advent this year,
when we attend ‘the Lord who will come’ and ‘who will not delay’ may be a very
good time to do this. I believe that it is very important that we return as
soon as possible to a common orientation, of priests and the faithful turned
together in the same direction – Eastwards or at least towards the apse – to
the Lord who comes, in those parts of the liturgical rites when we are
addressing God..”
The cardinal was followed in his
address by Bishop Dominique Rey of Fréjus-Toulon, who said the invitation to
say Mass eastwards “calls us to realise once again, in all our liturgical
celebrations, that Christian liturgy is essentially oriented to Christ whose
coming we await in joyful hope.”
However,
Jesuit Father Federico Lombardi, Vatican spokesman, issued a statement on July
11 indicating the Pope Francis met with Cardinal Sarah on July 9 to indicate no
liturgical directives will begin in Advent. Put differently, the Vatican clarifies that this is
NOT a change in Mass celebrations. In a communiqué issued by
the Vatican spokesman Father Federico Lombardi said Cardinal Sarah “has always
rightly been concerned about the dignity of the celebration of the Mass,” in
order that it might adequately “express an attitude of respect and adoration of
the Eucharistic mystery.” But Fr. Lombardi added that Cardinal Sarah, who was
appointed by Pope Francis as Prefect of the Congregation for Divine Worship and
the Discipline of the Sacraments, was NOT issuing a directive to priests, and
that there is NO instruction for priests to celebrate Mass facing east from the
beginning of Advent. According to Lombardi, “some of his phrasing has been
badly interpreted, as if he had announced new, different indications from those
now given in liturgical norms and the words of the popes on celebration toward
the people and the ordinary rite of the Mass.”
Therefore it is
useful to remember that in the Institutio
Generalis Missalis Romani (General Instruction of the Roman Missal),
which contains the norms relating to the Eucharistic celebration and is still
in full force, paragraph no. 299 states that: “Altare
extruatur a pariete seiunctum, ut facile circumiri et in eo celebratio versus
populum peragi possit, quod expedit ubicumque possibile sit. Altare eum autem
occupet locum, ut revera centrum sit ad quod totius congregationis fidelium
attentio sponte convertatur” (“The altar should be built separate from
the wall, in such a way that it is possible to walk around it easily and that
Mass can be celebrated facing the people, which is desirable wherever possible.
Moreover, the altar should occupy a place where it is truly the centre toward
which the attention of the whole congregation of the faithful naturally
turns”.)
Pope Francis, for his part, on the occasion of his visit to
the Dicastery for Divine Worship, expressly mentioned that the “ordinary” form
of the celebration of the Mass is that expressed in the Missal promulgated by
Paul VI, while the “extraordinary” form, which was permitted by Pope Benedict
XVI for the purposes and in the ways explained in his Motu Proprio Summorum Pontificum, must not take the place
of the “ordinary” one. Therefore, new liturgical directives are not expected
from next Advent, as some have incorrectly inferred from some of Cardinal
Sarah’s words. Fr Lombardi also said it would be better “to avoid the use of
the expression ‘reform of the reform,’ referring to the liturgy, given that
it’s sometimes the sources of misunderstandings.” This was expressed during a
recent audience granted by the Pope to the same Cardinal Prefect of the
Congregation for Divine Worship.
In view of these, Fr
Andrew Menke, associate director of the US Conference of Catholic Bishops’
divine worship office, told Catholic News Service on July 6 stated succinctly: “I
think he’s just encouraging as anyone can encourage, but because of his
position, his encouragement carries more weight. He’s not changing the
legislation at all; he’s just giving his opinion that he thinks this would help
people to pray better.”