MARY, COMFORT OF THE AFFLICTED 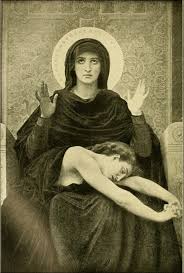 MARY, COMFORT OF THE AFFLICTED
(A Reflection on Mary)

A critical look into our contemporary society reflects a world filled with the
desolate, the poor, the marginalized, victims of hunger, war, the homeless,
prostitution, disease, refugees, and those afflicted with other forms of
challenging situations.
“Affliction”
became a reality due to the disobedience of our first parents, that is, after
the fall, the human race became afflicted by sin and the result is what we see
today (diseases, famine, abject poverty, war, etc.). Since Paul made us to
understand that where sin increases, Grace abounds all the more (Rm. 5:20).
Consequently, when the world was afflicted by sin, by our first parent, God
prophesied that the Blessed Virgin Mary would become the comfort of the
afflicted: “…I will make enmity between you and the woman, between Her Seed and
your seed, and it would bruise your head…” (Gen. 3:15). This was realized in
the coming of Christ and His blessed Mother.
When
we take a cursory look at the world’s history prior to the coming of Christ, we
see nothing but a state of hopelessness, and the hope for a messiah to free
mankind from its afflicted condition. At a point in time, God sent his angel to
a virgin girl to announce to her His plan of redemption for an afflicted world;
in the end, she cooperated in bringing COMFORT to the afflicted world. Put
differently, the Blessed Virgin Mary became the comforter of the afflicted world
who cooperated with God to give God the Son a human nature for the redemption
of mankind.
The
Blessed Virgin Mary has always been a source of comfort in unpleasant
situations; an example is seen in the Wedding scene @ Cana, where she came in
to rescue the problem encountered by the poor couples who could not afford much
wine for their guests; and though, it wasn’t the proper hour for Christ to
manifest his power (…woman my hour has not yet come Jn. 2:4), He still had to
listen to his Mother. What an example of Obedience! A situation where the
Almighty God listens to the request of His Blessed Mother…, thus comfort was
restored to the afflicted couples and it saved them from disgrace. The effect
of the Blessed Virgin’s cooperation to comfort an afflicted mankind realized
its apex by the death and resurrection of Christ; thus, Paradise (the highest
form of comfort) became open to us.
Till
date, our Blessed Mother continues to be a source of comfort to us, and
especially to the afflicted. 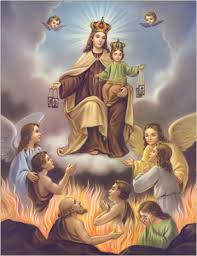 She appeals to God in heaven, and God listens to
Her, He obeys her because He cannot turn down the request of his Mother. She is
also known as the advocate for the “Suffering Church”, that is, the afflicted
souls in Purgatory. Little wonder I was made to understand that on every first
Saturday of every month, She goes to Purgatory to free the souls of her
devotees; as seen in the pic above – This is known as the “Sabatine Privilege”.
What a privilege to be a client of Mary, her devotee!
My
dear friends in Christ, the questions I have for you on this day are: Have you
ever been afflicted? Where do you run to when afflicted? Have you asked for the
efficacious intercession of our Blessed Mother when in difficulty? Do you
faithfully honour Her? Do you have confidence in her that She can obtain graces
for you? When last did you say her Rosary in Her honour? Etc…
This
moment offers us the golden opportunity to return to this school of
our Blessed Mother, that she may comfort us in our afflicted state; that She
may teach us to be patient in difficulties and be obedient to Christ her Son,
just as she told the attendants at the wedding at Cana “do whatever He tells
you”. Even when afflicted by disease, hunger, war, pains, etc., we can learn to
listen to our Blessed Mother who tells us to do whatever Christ tells us, and
Christ’s Will for us is salvation, and this can easily be achieved by getting
closer to our Blessed Mother by a means of true devotion to her. With this, we
come to embrace salvation offered by our Lord Jesus Christ.
On
this day I commend into the maternal intercession of Mary, all the souls in
purgatory, all those passing through one difficulty or another, those faced
with character assassination, those afflicted with set ups and false
testimonies, those afflicted by the wickedness of men, those afflicted with
unemployment, those seeking for the fruit of the womb, those seeking for
marriage, those faced with health challenge, those driven away from their
homeland by means of war and violence, those forced into prostitutions etc.,
and above all, those of us who are comfortable to be granted us the spirit of
charity towards our brothers and sisters in need in the society.
By
so doing, we would be imitating our Blessed Mother who came to rescue and offer
comfort to the world when it needed it most; thus becoming co-comforters to one
another.
O Mary, comfort of the afflicted, pray for us who have recourse to thee. Amen!