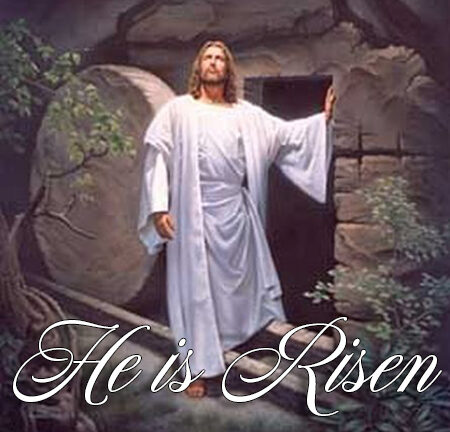 After having criticized Catholics for Celebrating a “pagan god” at Christmas (upon seeing our sound and unalloyed responses vis-à-vis Scripture and Tradition), they went ahead to criticize Easter, claiming that it is a pagan festival, named after Anglo-Saxon goddess named “Eostre”; and that if truly we are celebrating the Resurrection of Christ, why are we not saying “Happy resurrection”? It is now obvious that all these criticisms are born out of joblessness, ignorance, hatred, and envy against the “Body of Christ”, the true Church. Nevertheless, Christ has promised to be with His Church until the end of times. (cf. Matt. 28:20). On our part, we shall not cease to always counter their arguments through our apologetic write-ups, in order to dispel doubts, instruct the ignorant, and keep the faithful on the path of the Truth.

Apparently, during the Easter octave, while Catholics and other Traditional Christians were busy celebrating the risen Lord, on one hand, others were busy placing memes online to mock the Easter celebration and render it meaningless. I’m particularly not surprised about this because, from the earliest times, lies were told that Jesus did not rise from the dead (that his disciples came to steal his body…); besides, the disciples were harassed, flogged, imprisoned, and even killed just because they proclaimed the Resurrection of Jesus Christ (cf. Acts of the Apostles). Aside from this, are we to even consider the statements of Barrack Obama, Hilary Clinton et al, in relation to the brutal terrorist attacks in Sri Lanka on Easter Sunday, depicting Christians as “Easter Worshippers”, and the subsequent negative reactions that emanated from it? Some went further, interpreting the term “Easter worshippers” as a false claim that Christians worship a pagan goddess at Easter. For them, the name “Easter” is itself a giveaway – that is derived from the Mesopotamian goddess “Ishtar.” Laughable!

The unfortunate aspect of these criticisms lies in the fact that the word Easter is actually an English word, which sprung from German roots. Put differently, it turns out that only a person whose native language is English, or perhaps German, would even advance this kind of argument. However, if your horizons are a bit broader, the true origin of Easter is obvious. Anyone making this charge shows a total lack of comprehension of global Christianity. How do I mean? The earliest recorded observance of an Easter celebration comes from the 2nd century, through the commemoration of Jesus’ Resurrection as testified by the Apostles. Now, the name “Easter” from the original Jewish word is “Pesach” or “Passover” as it is biblically known. This translates itself into Greek as “Pascha”, and in Latin Septuagint a “Pascha”. From there it passed into the Romance languages, and so in Spanish, it is Pascua, in Italian, it is Pasqua, in French it is Paques, and in Portuguese it is Páscoa. It also passed into the non-romance languages, such as the Germanic languages Dutch, where it is Pasen, and Danish, where it is Paaske. From the etymological derivations above, it is very clear that Easter has no origin with the so-called Mesopotamian goddess “Ishtar”, or the Anglo-Saxon goddess named “Eostre”.

From the truth of the antecedents, how can we explain the relationship between the original word (Pesach) and Easter as seen in the English and German languages? The English word “Easter” and in German “Ostern” have more to do with a derivative of the word “erstehen,” an older form of the word “auferstehen,” which is a German word for “Resurrection.” Also, “Easter could be said to be related to the West Germanic word (Eostur, Eastur, Ostara, Ostar) akin to the Old English term EAST, which means “East,” the direction of the Rising Sun, which to the Norsemen meant the season of the rising (growing) sun, the season of new birth. Far from its etymological concept, (Pesach), the word was used by our ancestors to designate the Feast of New Life in the spring. The same root is found in the name for the place where the sun rises (East, Ost). Several times, the Scripture has often referred to Christ as the Sun of justice, rising from the east; does this remind us of Zachariah’s prophecy in relation to Christ – “through the loving mercy of our God, the rising Sun has come to visit us” (Luke 1:78). A main reference to the Lord Jesus Christ coming as the Rising Sun is found in the last chapter of Malachi. In this, the Lord Jesus Christ is referred to as the rising Sun of righteousness… (cf. Malachi 4:1-3) Paul also refers to Christ as the light that shines upon man – “For this reason, it says, ‘awake, sleeper, and arise from the dead, and Christ will shine on you.” (Ephesians 5:14). This symbolism of Easter (as the sun, which had its birth in the East and brought new life upon earth) has a supernatural meaning to the new life of the Risen Christ, the eternal and uncreated Light. Does this give us a clue as to why we gather for worship on the first day of the week, which in the English language came to be known as SUNday?

In relation to Easter, interestingly, this word appears in the King James Version of the Bible. Thus only in the highly Protestant countries of Germany (where the Reformation started) and England (where the intense persecution and martyrdom of Catholics was the harshest), does the term “Easter” have any pagan associations at all. So perhaps in these two Protestant countries paganism was not sufficiently stamped out to use the Judeo-Christian term for the celebration of Christ’s Resurrection that was used everywhere else in Europe.

From the foregoing, the point remains that the English term “Easter” in relation to the Death and Resurrection of Christ, has nothing to do with paganism. It has everything to do with Judaism and with Christ’s Resurrection; that is, Christianity. Only the ignorant would keep up their criticism.