INTRODUCTION TO THE FATIMA APPARITIONS: DAY 5 – “THE MARIAN APPARITIONS” 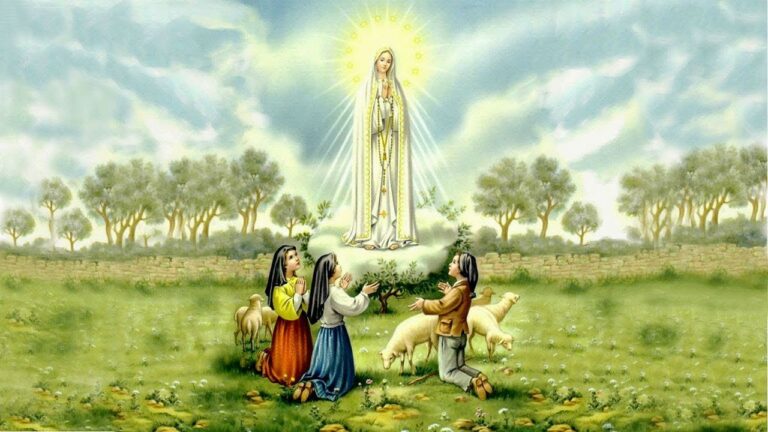 THE SECOND APPARITION OF THE MOTHER OF GOD

The little children did not immediately return to their homes after the first apparition on May 13, 1917. They spent the rest of the afternoon in the fields “supremely happy,” reliving their visit from The Lady. Amid the joy they felt, they knew The Lady was somehow unhappy. Her parting words were troublesome, “Say the Rosary every day, to bring peace to the world and an end to the war.” The children were innocently unaware of the Great War surrounding them.

While Lucia and Francisco held to their agreement, Jacinta was not accustomed to keeping secrets from her parents. She anxiously waited for them to return home from the market. Once she saw them, she ran to her mother exclaiming, “Mother, I saw Our Lady today in the Cova da Iria!” Her mother was incredulous, recounting later, “Sad and disappointed, she followed me into the house. … She began to tell me all that had happened, the flash, their fear, the light. She told me how beautiful and pretty The Lady was. … I put no stock in her words, saying ‘You are really silly. As if Our Lady would appear to a little girl like you!’” Francisco came to his sister’s defense and confirmed her account of the day’s events. Their father, however, did believe them. He reminded his family that Our Lady had done such things before, and they would leave it in God’s hands.

The story of the vision made its way through the village quickly. Lucia’s mother heard of it and questioned her daughter. “I have heard people talking, saying that you saw Our Lady at the Cova da Iria. Is that true?” Lucia knew Jacinta must have revealed the story and replied, “I had asked her so much not to tell anyone!” The secrecy gave her mother an even greater reason to doubt the story. She asked her daughter to explain. Lucia said, “I don’t know if it is Our Lady. It was a most beautiful lady.” While the other two children had already concluded that The Lady was Mary, the mother of Jesus, Lucia retained a spirit of discernment.

The month leading up to the next visit from the Lady was agonizing for the children. Many people concluded that the little shepherds invented the story for attention. Children mocked them. Adults threatened them. Yet they continued to tell the truth. They followed the angel’s instructions to “offer up everything within your power as a sacrifice to the Lord in an act of reparation for the sins by which He is offended; and of supplication for the conversion of sinners.” Every insult, taunt and contemptuous glare was offered up to the Lord. Their only consolation was the anticipation of the next visit from The Lady.

The Santos and Marto families, the parish priest, and others attempted – forcefully at times – to dissuade the children from returning to the Cova on June 13. The Festival of St. Anthony, a time of music, food, and games, especially for children, was underway in the village. All three were admonished, told to attend the festival, and commanded to forget about The Lady. Lucia did go to the festival, however, but not with a frivolous intent. Instead, she talked to the girls who made their First Communion with her. She convinced 14 of them to go with her to the Cova. The three children and their small army of First Communicants made their way to the Cova where The Lady appeared a month earlier. They were surprised to find a group of about 50 people waiting there for them. Most came from neighbouring villages and were there because they believed the children. 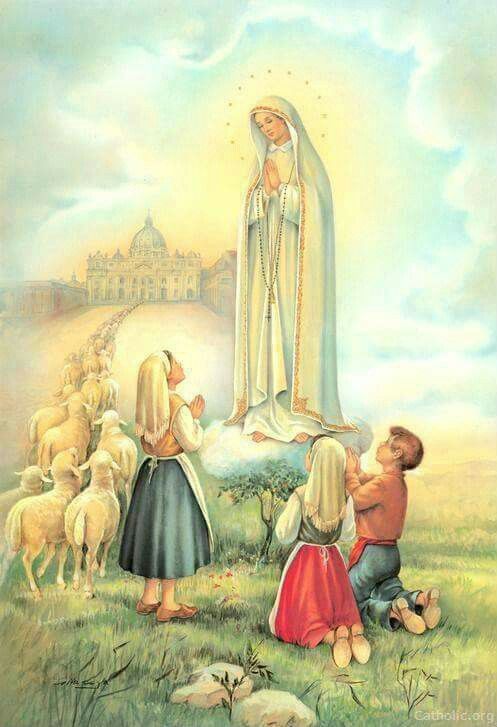 It was near noon. They began reciting the rosary, and as they finished, Lucia got up and shouted, “Jacinta, Jacinta, here comes Our Lady. I just saw the flash.” The three of them ran over to the small holm oak. Everyone followed and knelt on the ground with them. Lucia raised her eyes towards the skies, as if in prayer, and was heard to say, “You told me to come here today. What do you want me to do?” “I want you to come here on the 13th of next month,” The Lady said. “Say the rosary, inserting between the mysteries the following prayer: ‘Oh My Jesus, forgive us. Save us from the fire of hell. Bring all souls to heaven, especially those in most need.’ I want you to learn to read and write, and later I will tell you what else I want.” Then Lucia asked Our Lady to cure a sick person who was there that day. Our Lady answered, “If he is converted, he will be cured within the year.” Lucia asked again, “I would like to ask You also to take us to heaven!” “Yes,” Our Lady answered, “I will take Jacinta and Francisco soon. You, however, are to stay here for a long time. Jesus wants to use you to make me known and loved. He wants to establish the devotion to my Immaculate Heart in the world. I promise salvation to those who embrace it and their souls will be loved by God as flowers placed by myself to adorn His throne.” “Am I going to stay here alone?” Lucia asked, full of sadness at the thought of losing her beloved cousins. “No, My daughter.” Lucia’s eyes filled with tears. “Does this cause you to suffer a great deal? I will never leave you. My Immaculate Heart will be your refuge and the way that will lead you to God.”

It was at the moment when she said these last words that she opened her hands and communicated to us, for the second time, the reflection of that immense light. In it, we saw ourselves as if submerged in God. Jacinta and Francisco seemed to be in the part of that light that rose towards Heaven and me in the part that spread over the earth. In front of the palm of Our Lady’s right hand was a heart surrounded by thorns that seemed to be embedded in it. We understand that it was the Immaculate Heart of Mary, outraged by the sins of humanity, that wanted reparation.

The crowd now saw Lucia rise quickly to her feet. Stretching out her arm, she exclaimed, “Look, there she goes; there she

goes!” The children remained silent as they watched Our Lady leave. A few minutes later Lucia said, “There now! It’s all over. She has entered heaven. The doors have closed.” Then everyone there, believer and non-believer alike, noticed something strange about the tree: its highest branches, which had been standing upright, now were bent down towards the east, as if someone had just walked on them. This was how the second apparition ended.

As was the case during the first apparition, Lucia was the only one of the three to speak to Our Lady. Jacinta was allowed to see and hear her words. Francisco was permitted to see her, but could not hear her words. Lucia received an answer to the question she had been discerning. There was no longer doubt in the minds of the seers that The Lady was the Blessed Virgin Mary. She spoke of her Immaculate Heart. She spoke of her son Jesus and His desire to make her known and loved. She began to reveal God’s plan for them. Our Lady prepared the children for what was to come. To Francisco and Jacinta, the promise of being taken to heaven soon brought them joy. To Lucia, however, the message brought sadness. She was being prepared to live a long life on earth without her two cousins and fellow seers.

This visit was the first one to give the children, especially Lucia, a mission and message for those around her. Our Lady was preparing the young girl. Jesus had plans to use Lucia to increase the world’s devotion to His mother. They were given to know that these visitations were meant for more than themselves. They were being prepared to convey God’s plans to the world. The foundation of the devotion to the Immaculate Heart was being prepared. To prepare them for this divine commission, Our Lady instructed them to learn to read and write.

Oh My Jesus, forgive us. Save us from the fire of hell. Bring all souls to heaven, especially those in most need.Amen

It is amazing how selfless Our Lady is… How often do I remember to pray for the world?
O Lady, reveal to me God’s plan for my life and help me follow wherever He leads. Amen.

May those who doubt your existence come to know you more.

Oh Mother pray for me.
Our Lady of Fatima please pray for me I beg you.

“Every insult, taunt and contemptuous glare was offered up to the Lord”
We too are called to offer up our daily sufferings and crosses to the Lord in atonement for our sins and those of the world.
Immaculate Heart of Mary! Be our refuge and the way that will lead us to God. Amen

Oh My Jesus, forgive us our sins. Save us from the fires of hell and lead all souls to heaven especially those most in need of your mercy. Amen.

The month leading up to the next visit from the Lady was agonizing for the children. Many people concluded that the little shepherds invented the story for attention. Children mocked them. Adults threatened them. Yet they continued to tell the truth.

Do I remain in the truth even in the face of adversity?

‘Oh My Jesus, forgive us. Save us from the fire of hell. Bring all souls to heaven, especially those in most need.’ Amen