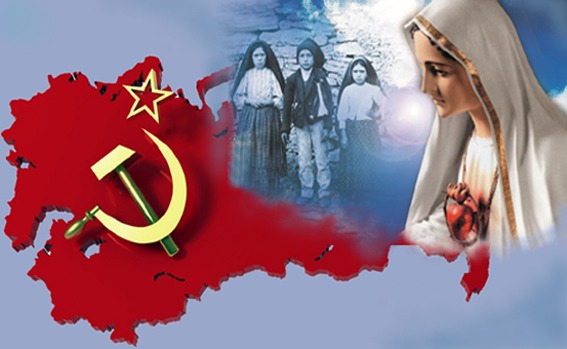 FATIMA APPARITIONS, THE DEVIL’S CONSEQUENT ATTACKS, AND OUR LORD’S INTERVENTION

Now, the miracle had come to pass at the hour and day designated by Our Lady. Although this was the last apparition in the Cova, it also marked the beginning of the modern world. Satan began preparing for the great battle against Our Lady and the Church at that very moment. The Russian Revolution that would quickly usher in Communism and cost millions of people’s lives had begun during the late summer of the same year, 1917.

Sadly, on October 13, 1917, in Moscow, the very same day that Our Lady appeared for the sixth time in Fatima, there was an attack on a Catholic church. Maria Pavlovna, daughter of Grand Duke Paul Alexandrovich, often called “Maria the Younger,” was teaching religion to a group of approximately 200 children in the Church of the Iberian Virgin. Without warning, revolutionaries entered the church, destroyed the icons and the sanctuary, desecrated the altar, and murdered most of the children. Maria was able to escape with her aides and some of the children. She went to the Royal Military Headquarters to get help and report this horrific incident to a family friend. She ran to his office and told him what had happened. “I know,” Lenin said. “I sent them.”

Also at noon on October 13, 1917, while the devil was wrecking his attacks, our Lord made possible the episcopal ordination of a bishop who would one day become a great pope. In the Sistine Chapel, Pope Benedict XV consecrated Monsignor Eugenio Pacelli as a bishop and, at the same time, elevated him to an archbishop. Archbishop Pacelli was assigned as the papal nuncio to Munich. Lenin’s Communist revolutionaries, who were highly organized in Munich, published a list of 325 men whom they intended to kill. One of them was Archbishop Pacelli. An attempt was made on his life, and he credited Our Lady for saving him.

Later, on March 2, 1939, Cardinal Pacelli was elected pope. The pontiff (holy father) had a great devotion to Our Lady. In 1951, he published the encyclical “Ingruentium Malorum,” promoting the rosary. In 1953, he published the encyclical “Fulgens Corona,” proclaiming a Marian Year to commemorate the 100th anniversary of Pope Pius IX’s apostolic constitution “Ineffabilis Deus” (which affirmed the dogma of the Immaculate Conception). And in 1954, he published his encyclical “Ad Caeli Reginam,” proclaiming the Blessed Virgin Mary as Queen of Heaven. Upon his election as pontiff, Cardinal Pacelli was the 12th pope to take the name Pius. Pope Pius XII stood strong as the Vicar of Christ against the evils of Germany and Russia.

Our Lady of Fatima, continue to pray for us. Amen.

Very interesting and calls for deep reflection. Thanks Fr. Cjay

Padre, please I have a question: does it mean all these had happened already? The reason am asking is that am confused especially after reading about the consecration of Russia to immaculate heart of Mary which took place this year and you confirmed that since the message none of the Pope was able to do that except this year.
Then today’s message about the massacre of children in church, did it really happened?

Even to this day, the Church is still being under attack! But our consolation lies in Christ’s very own words “the gate of hell shall not prevail against thee”
Our Lady of Fatima! Pray for us! Through your intercession, may Christ continue to defend the Church from the snares of her enemies. Amen