INTRODUCTION TO THE FATIMA APPARITIONS: DAY 1 – 3 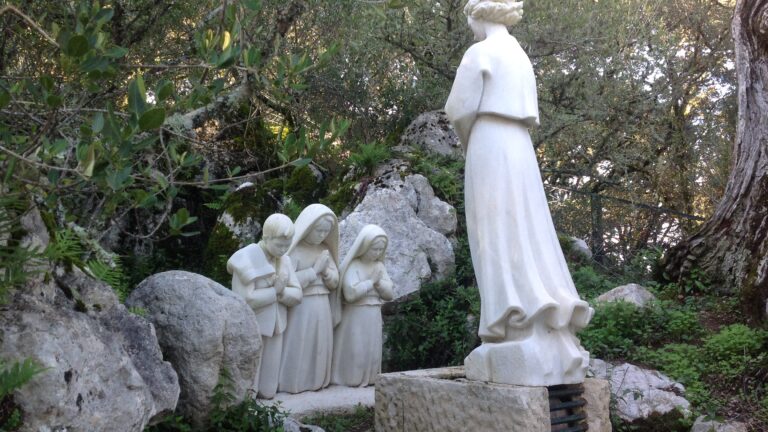 (THE FIRST APPARITION OF THE ANGEL OF PORTUGAL) The apparitions of Our Lady of Fatima were preceded by three visions that Lucia, Francisco, and Jacinta had of the Angel of Portugal, or of Peace. Through conversations with the Angel, Providence predisposed the children to the moment when Our Lady would speak to them. The first apparition of the Angel took place on a hill close to the “Cova da Iria,” called “Cabeço.” Some supernatural manifestations preceded the appearance of the Angel. Lucia, and three other girls, saw hovering over the valley’s grove, a kind of white cloud with a human shape, “a figure, as if it were a snow statue, that the sun’s rays made even more transparent”, according to Lucia’s words. On different days, this apparition was repeated twice. However, it was at “Loca do Cabeço,” during the spring of 1916, that the Angel clearly appeared for the first time to Lucia, Francisco, and Jacinta.

After praying, the children were playing when a strong wind shook the trees. They saw, then, walking over the olive grove towards them, a young man resplandescent and of great beauty, appearing to be 15 years old, and shone like that of a crystal pierced by the rays of the sun. Sister Lucy says this as follows: “When he came to us, he said: Do not be afraid! I am the Angel of Peace, he said: And, kneeling on the ground, he bowed his forehead to the ground and made us repeat these words three times: 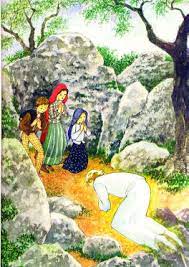 “My God, I believe, I adore, I hope and I love You! I ask pardon for those who do not believe, do not adore, do not hope, and do not love You!”

Then, rising, he said: “Pray like that. The Hearts of Jesus and Mary are attentive to the voice of your supplications”. And he disappeared. The atmosphere of the supernatural that enveloped us was so intense that we hardly noticed our own existence for a long time, remaining in the position in which he had left us, always repeating the same prayer. The presence of God felt so intense and intimate that even among us we did not dare to speak. The next day, we felt the spirit still enveloped by that atmosphere that only slowly disappeared.”

(THE SECOND APPARITION OF THE ANGEL) 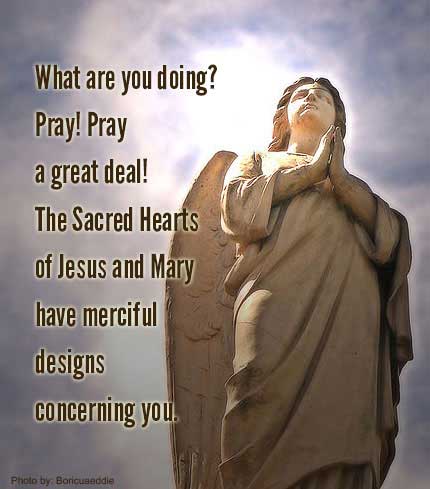 In the summer of 1916, when the “three shepherds” were playing on the terrace of Lucia’s parents’ house, the Angel appears to them again. He tells them, according to Sister Lucia’s account: “What are you doing? Pray! Pray a lot! The Most Holy Hearts of Jesus and Mary have over you designs of mercy. Constantly offer the Most High, prayers and sacrifices. ‘How shall we sacrifice ourselves? I asked.’ ‘Of all that you can, offer sacrifice to God, in an act of reparation for sins with that He is offended, and plead for the conversion of sinners. In this way, you attract to your country, peace. I am your Guardian Angel, the Angel of Portugal. Above all, accept with submission to the suffering that the Lord sends you.’”

(THE THIRD APPARITION OF THE ANGEL)

At the end of summer or beginning of autumn of the same year (1916), again at ‘Loca do Cabeço,’ the last appearance of the Angel, described by Sister Lucia in the following terms:

“After we had a snack, we agreed to go and pray in the grotto, which was on the other side of the mount. […] As soon as we got there, on our knees, with our faces on the ground, we started to repeat the Angel’s prayer: ‘My God, I believe, I adore, I hope and I love You! I ask pardon for those who do not believe, do not adore, do not hope, and do not love You!’ I didn’t know how many times we had repeated this prayer when we saw that an unknown light shining on us. We got up to see what was going on, and we saw the Angel holding a chalice in his left hand, on which a Host was suspended, from which a few drops of Blood was falling into it. Leaving the chalice and the Host suspended in the air, the Angel prostrated himself on the ground, invited us to do the same made us repeat this prayer three times:

‘Most Holy Trinity, Father, Son, and Holy Spirit, I adore You profoundly, and I offer You the most precious Body, Blood, Soul, and Divinity of Jesus Christ, present in all the tabernacles of the world, in reparation for the outrages, sacrileges, and indifference with which He Himself is offended. And, through the infinite merits of His Most Sacred Heart, and the Immaculate Heart of Mary, I beg of You the conversion of poor sinners.’ 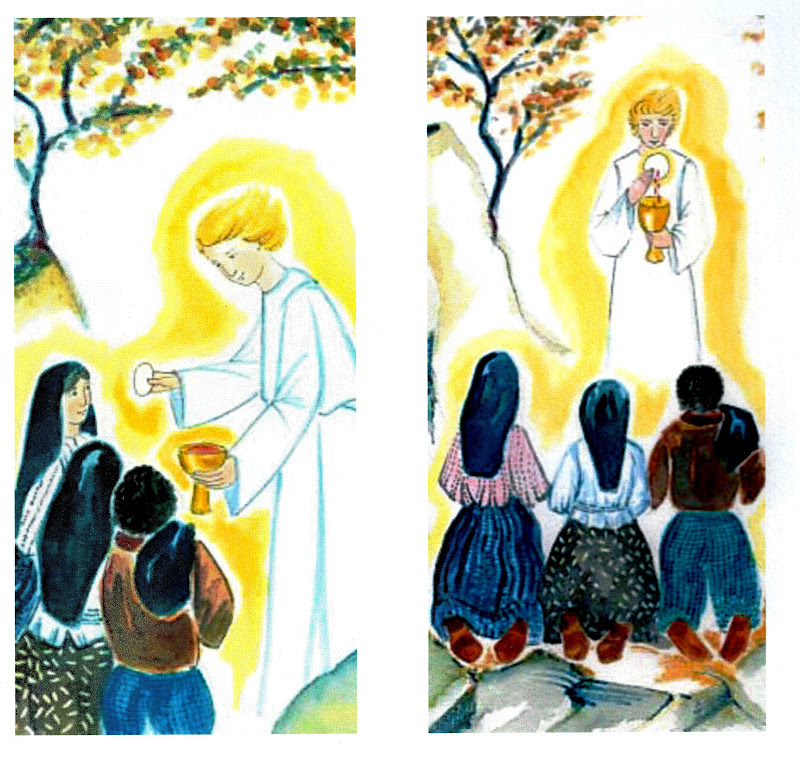 Then, getting up, he gave the Host to Lucia, and the chalice, he gave to Francisco and Jacinta to drink, saying: ‘Take and drink the Body and Blood of Jesus Christ, horribly outraged by ungrateful men! Make reparations and comfort your God.’ The Angel’s words made a deep impression on us, who, from then they began to atone for sinners through sacrifices and an assiduous life of prayer. And falling on the ground again, he repeated the same prayer with us three more times: ‘Most Holy Trinity… etc’ and disappeared. We remained in the same attitude, always repeating the same words; and when we got up, we saw that it was night and, therefore, time to come home.”

Through the intercession of Our Lady of Fatima, may Almighty God bless + you, the Father, and the Son, and the Holy Spirit. Amen.

May our Mother Mary, our Lady of Fatima continue to intercede for us