INTRODUCTION TO THE NOVENA TO SAINT JOSEPH 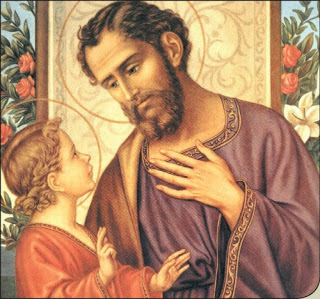 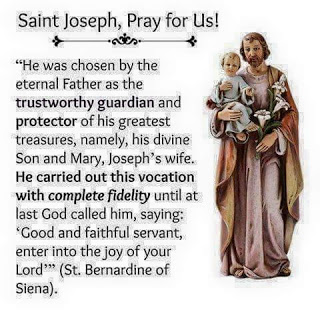 Dear friends, I welcome you all to the month of St. Joseph. The feast day is March 19, as a devotee of St. Joseph, I would embark on “online novena” to this great patriarch today which will end on the 19th of March, crowned with the Mass of the Solemnity of St. Joseph.
Dear friends, during the period of the novena, I shall post articles on St.Joseph in order to enrich our knowledge on this great saint which we know little about. Also, each day would be
dedicated with prayers on various intentions.


REFLECTION
IMITATING THE SILENCE OF
ST. JOSEPH IN A CONSUMERIST AND NOISY SOCIETY
In
a world which is “too noisy, and does not encourage reflection and
listening to the voice of God”, Christians should “allow themselves
to be ‘infected’ by the silence of St Joseph” (Pope Benedict XVI)
Who
is Saint Joseph? Who is this singular man chosen as the spouse of the Most Holy
Virgin, as head of the Holy Family?
St.
Joseph (the husband of Mary and the custodian of the Redeemer), was the one
chosen shadow of God upon earth. He was called the Father of Jesus. The Eternal
Father deemed it fit to entrust to St. Joseph his greatest treasure (our Lord
Jesus Christ). This was as a result of the virtues of this great saint; little
wonder the Bible calls him a just man.
However,
the Bible says very little about Joseph in general, but talks more about his actions.
This silence of Saint Joseph is very eloquent. It teaches us a fundamental
attitude to enter into deep prayer. If we are constantly bombarded by noises
then it is impossible to hear the Word of God, the Holy Spirit that speaks to
us in the gentle breeze of silence. Also the silence of Saint Joseph teaches us
the importance of example. We must prove our authenticity by words, but also by
our actions. Saint Joseph taught the world by the holy way that he lived. May
he be an example for us.
He
was a man of few words, he spoke through his actions, and he did as the angel
of the Lord had commanded. Joseph’s response was action. This is clearly seen
in the gospel narratives surrounding the birth of Christ, the naming of Jesus
and circumcision, the presentation in the temple, the flight into Egypt and the
return, the finding in the temple…etc. In all these, hardly do we hear St.
Joseph’s words but his actions are clearly seen.
I dare to say that he was “Silently-active”. Indeed, action speaks
louder than voice…
Such
a silence was “permeated with the contemplation of the mystery of God, in an
attitude of total availability to the divine will,” Benedict XVI said. “A
silence through which Joseph, together with Mary, guard the Word of God, known
through sacred Scripture, comparing it continually to the events of the life of
Jesus; a silence interwoven with constant prayer, a prayer of blessing of the
Lord, of adoration of his holy will and of boundless confidence in his
providence.”
The Holy Father added: “It is not exaggerated to say that Jesus will learn—on a
human level—precisely from ‘father’ Joseph this intense interior life, which is
the condition of authentic righteousness, the ‘interior righteousness,’ which
one day he will teach to his disciples.” (Cfr. MTT. 5:20)
The
question comes to you and I… How have I been able to carry out my duties in a
silent & active manner like St. Joseph? Do I parade by good deeds before
men?
This period of lent is a period to absorb the virtues of St. Joseph for better
results.
Benedict
XVI concluded: “Let us allow ourselves to be ‘infected’ by St. Joseph’s
silence! We need it greatly, in a world that is often too noisy, that does not
favor meditation or listening to the voice of God. During this period of
preparation for Easter, let us cultivate interior meditation, in order to
welcome and safeguard Jesus in our lives.”
AMEN!
HYMN
Hail holy Joseph hail,
Father of Jesus hail,
Father be thou to those,
Thy foster-Son redeemed…
ST. JOSEPH GUARDIAN OF THE HOLY FAMILY, PRAY FOR US AND ALL THOSE WHO INVOKE YOUR AID…