IF JESUS CHRIST IS THE SON OF GOD, HOW CAN WE UNDERSTAND THE FACT THAT HE IS GOD? 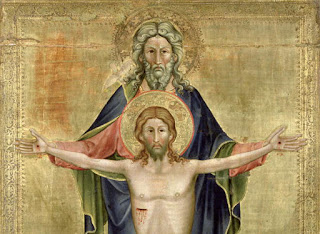 IF JESUS CHRIST IS THE SON OF GOD, HOW CAN WE
UNDERSTAND THE FACT THAT HE IS GOD?

Following my post On “Mary
Mother of God”, I got a reaction from a member of the group I belong on Facebook (Catholic Doctrines)
who misunderstood the belief that Jesus
Christ is God, for him, Jesus Christ is the Son of God, and he is not God. He
failed to understand that, being the BEGOTTEN Son of God already attests to the
fact that Jesus Christ is God; because we believe that Christ was begotten from
the father from eternity, He was NOT created. Hence, he has the same essence
with God the Father.

Below are the excerpts
of the conversation from the group:
The young man said: “Jesus Christ is the son
of God who came to the world and die for us so that our sins be forgiven. Is
wrong for a good Christian that understand bible to say Jesus is God.”
Then I responded:  “Inasmuch as Jesus Christ is the Son of God, He is also God as
well. In summary, I refer you to the Gospel of John 1:1-14….Read through and
ask the Holy Spirit to guide and aid you to understand better… If you are not
ok with that verse and you need more biblical proofs, kindly let me know
please.”

He responded: “We
should not misquote the bible, what the bible says in the first John does not
refer Jesus to be God, it read in the beginning was word and the word was with
God and the word was God. Is word refers to Jesus Christ? Is another name for
Jesus Christ word? Why are we misquoting the bible? How can one said Jesus
Christ is God? If Jesus is God who is the son of God?”
At this stage I felt
so sorry for him. He has failed to understand that Jesus Christ is the Eternal
Word of God. I believe He failed to understand that in that same gospel according to John chapter 1, verse
14 that the WORD that was referred to as God was made flesh and dwelt among us.
This, the Bible refers to as Jesus Christ.
It is one thing to read the Bible
and it is another thing to understand its allegorical meaning, anagogical
meaning and the spiritual meaning.
Then I took him on a
spiritual tour across the Scriptures and the Teachings of the Church attesting to the belief that Jesus
Christ being the Son of God is God himself. Thus we have the concept of the TRINITY; that is, God
the Father (who revealed himself in the Old testament), God the Son (Jesus
Christ) and God the Holy Spirit, all UNITED & UNDIVIDED AS ONE GOD.
Below were my responses
to the young man:
“I remember vividly as a little boy how I
struggled to understand Christ as God and at the same time as the Son of God. I
remember how a colleague those days asked me: “if Christ is God, then what
title are we going to give to God of the Old Testament… Likewise, some persons
may grow up trying to understand this idea, just like you my brother.

When the Scriptures tell us that one Person within the Trinity is known as the
“Father,” and another as the “Son” (ONLY BEGOTTEN) It does
not intend to teach the Father existed prior to the Son, or that the Father is
greater than the Son but the Scripture is trying to express that they are of
the same in nature. The word “BEGOTTEN” indicates that Jesus Christ (God the
Son) was NOT created but begotten from God from eternity, before the existence
of time. Hence, he is of the same nature with God, with the same essence, thus
as eternal with God.

When you read the Scriptural passages carefully, you will discover that the
angels are several times called the sons of God (e.g., Job 38:7) since they had
no fathers, for they were directly created by God. Likewise, Adam was called a
son of God (Luke 3:38), because he was directly created. The same applies even
to fallen angels (Genesis 6:2), because they also were created beings. The term
is also used in a spiritual sense, of course, for those who have become
“new creatures” in Christ Jesus by faith (2Corinthians 5:17;
Ephesians 2:10; etc.). In this sense, we also are “sons of God”
(children of God) (e.g., I John 3:2) by special creation not physically, but
spiritually.

However, this example is never applied in this sense to Christ, for He is NOT A
CREATED Son of God (as the Jehovah’s Witnesses and other cultists teach), but
THE BEGOTTEN SON OF GOD–in fact, the ONLY Begotten Son of God (John 3:16). He
never had a beginning, for He was there in the beginning (John 1:1). In His
prayer to the Father in the upper room, Jesus spoke of “the glory which He
had with the Father before the world was” (John 17:5). He was begotten,
that is generated from eternity as having the same unique nature with the
Father. In the Nicene Creed, we profess …He was begotten not
made/created…BORN OF THE FATHER BEFORE ALL AGES. Begotten has the same
meaning with generated, or produced. God the Son is generated out of the
essence of God the Father. Just as a child shares the same humanness as his or
her parents, the Son shares the essential nature of God with the Father. Since
God the Father is eternal, the Son, being begotten of God, is also eternal.

No one in the Scripture has ever addressed God as his Father, except Christ;
that was the reason why the Jews wanted to kill him because He was calling God
His own Father, making himself equal with God. Please read John 5:18. This is
so because, saying that He is the Son of God implies that he shares the same
nature with God, therefore being God. Also, in John 10:30, He said, “I and the
Father are One”. This has already been noted by the Gospel of St. John chapter
1 “…and the Word was God”.

THROUGH HIM ALL THINGS WERE MADE
The Bible tells us that through The Son, as Word of God, all things have been
created. As Logos, the Son is the agent and artificer of creation… (John 1:3;
Colossians 1:16; Romans 11:36) 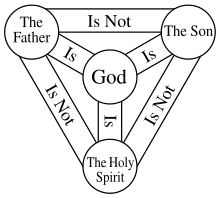 AS A WAY OF
CONCLUSION, LET ME STATE FURTHER SCRIPTURAL PROOFS THAT ATTEST THAT JESUS
CHRIST IS GOD:

1. Our Christian Bible makes us to understand in John 1:1 that “In the
beginning was the Word and the Word was with God and the Word was GOD” More
also, in John 8:58, Jesus makes clear that before Abraham, I AM. This name “I
AM” is certainly the name of God revealed to Moses at the scene of the burning
bush, hence, gives a proof of the divinity of Jesus with God the Father.

2. In Heb 1:6, it says “Again when he brings his firstborn into the world, he
says let all the angels worship him” Now, the fact and the truth is that angels
don’t worship another creature. They worship God; this we see in Rev. 19:9-10,
22:8-9. Hence, the Son of God identified in this verse 6 as the “firstborn” is
Jesus Christ, He is also with the same essence with God, thus angels also worship
Him.

3. Now, let’s turn to John 20:28, where Thomas says, as he probes Jesus’
wounds, “My Lord and my God!” Note that Jesus didn’t correct Thomas’
identification of him as God, because no correction was needed. Thomas,
previously doubting, knew exactly what he was saying, and what he was saying
was true; instead Jesus added: “you believe because you have seen, blessed are
those who have not seen, yet, believe.

4. In Colossians 2:15-20 Paul says that he (Jesus) is the image of God and that
in him ALL THE FULLNES OF GOD DWELLS.

5. Titus 2:13 describes Jesus as our God and Saviour. In John 8:58, Jesus says
of himself, before Abraham was born, I AM. He takes the very name YAHWEH (which
means I AM) for himself. The Jews were not in doubt what that meant. They
understood that he meant He is YAHWEH (God), and they picked up stones to stone
him.


6. Jesus is God because; Angels bow to Him (several places in the book of
Revelation). It is blasphemy to consider anyone bowing to or worshiping another
being who is not God.
7. Christ said in John 14, from verse 10 (read through): “believe me when I say that I am in the Father and the Father is in me…”


(CLICK TO READ: HOW COULD MARY BE GOD’S MOTHER; MISCONCEPTIONS & CLARIFICATIONS)

Hence, the conclusion is inescapable, in PROFESSING THAT JESUS IS THE SON OF
GOD, IT NECESSARILY IMPLIES THAT HE WAS BEGOTTEN FROM GOD AND HAS ONE AND THE
SAME ESSENCE WITH GOD, WHICH ATTESTS TO THE FACT THAT HE IS GOD”.