HOMILY/REFLECTION FOR THE MEMORIAL OF SAINT BARNABAS, APOSTLE & MARTYR 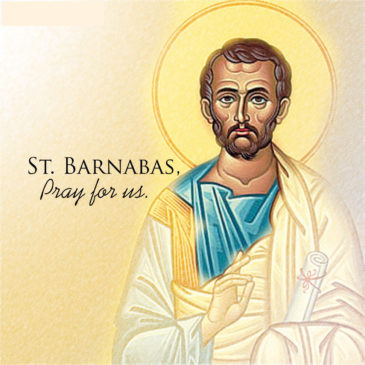 The saint we celebrate today was originally named Joseph, but we have come to know him as Barnabas as a result of his virtues. The Book of the Acts of the Apostles (cf. Acts 4:36) makes us understand that the Apostles surnamed him “Barnabas,” and today, he’s known and celebrated as such in the Universal Church. This name, whose Aramaic origin: “בּר נביא (bar naviya)” means “Son of the Prophet,” came to be interpreted in Greek as “υἱός παρακλήσεως,” meaning – “Son of Consolation,” or “Son of Encouragement” or “Son of Exhortation.” A lot can be said of this name with regards to his contributions in the life of the early Church. Nevertheless, we shall contemplate him in the light of today’s liturgical readings.

To begin with, in the gospel reading, Christ’s “Sermon on the Mount” continues to resound in our ears. Today’s section opens up with a radical call to grow deeper in virtue: “If your virtue goes no deeper than that of the Scribes and Pharisees, you will never get into the kingdom of heaven.” Apparently, Jesus’ audience would have been bewildered and shocked hearing this from him because the Scribes and the Pharisees were considered and looked upon as models of righteousness at that time; however, Christ was telling them that such category of people should not be looked upon as models and that those who tend to imitate them would not enter the kingdom of heaven. Obviously, the Pharisees and Scribes were often criticized by Jesus as hypocrites and as those who only lived out the letters of the law, but their hearts were far from the spirit and essence of the law. Undoubtedly, such people cannot be truly portrayed as models.

The Levite of Cyprus we celebrate today can be said to be a radical man whose virtues surpassed those of the Scribes and the Pharisees. It was because of his way of life that he was surnamed “Barnabas” by the Apostles, as earlier stated. Luke gives us a clue; he said that Barnabas had a piece of land, he sold it and gave the money to the Apostles for the benefit of the Christian community (cf. Acts. 4:36-37). He was indeed a generous man, a man who knew how to love in praxis and not merely in principle – he lived out the gospel values, and his righteousness surpassed that of the Scribes and Pharisees of his days; little wonder, today’s first reading describes him as “a good man, filled with the Holy Spirit and with faith.” Inasmuch as he wasn’t part of the Apostolic College, he was crowned with the title of ‘Apostle of Christ,’ and as Tradition holds, he was probably among the seventy-two disciples sent out by Christ (cf. Lk 10:1-24).

His spirit of availability and disposition for missions was excellent! As noted in today’s first reading, when the Church in Jerusalem heard that a great number believed and were converted to the Lord in Antioch, they sent Barnabas to coordinate and instruct them. We are told that when he arrived in Antioch and saw the great number, he left for Tarsus to look for Saul, and when he found him, he brought him to Antioch. As things turned out they were to live together in that church a whole year, instructing a large number of people. Here, I dare to say that the good examples they (Barnabas and Paul) laid in the Church of Antioch influenced the members to behave like Christ, and as a result, the faithful came to be called “Christians,” as Luke records: “It was at Antioch that the disciples were first called ‘Christians.’” Needless to say that Barnabas aided (alongside with Paul) the Church of Antioch to grow deeper in virtue, one that surpasses the virtue of the ‘Scribes and Pharisees,’ and as a result, they were called “Christ-like” (Christians); thus, fulfiling the words of today’s psalmist: “The Lord has made known his salvation; has shown his justice to the nations….all the ends of the earth have seen the salvation of our God.” Indeed, “the Lord has revealed to the nations his saving power.”

My dear friends in Christ, the lessons to learn from St. Barnabas today are enormous. Having been incorporated into the “Mystical Body of Christ” at baptism, and given a name, do we endeavour to live out that name by growing deeper in virtue as Barnabas did or are we at the same level with the ‘Scribes and Pharisees’ in virtue? In Barnabas, we see the generosity of giving to the Church and the needy everything he owned. We also contemplate his apostolic zeal to bring the light of Jesus Christ to the pagans. We cannot fail to identify his humility in recognizing his insufficiency to handle alone the immense task of Christianizing the great number of converts at Antioch (on one hand), and the initiative of inviting Paul to collaborate with him; thus, yielding a rich harvest by working as a team. Above all, his fraternal companionship that, despite some differences of opinion and temperament, made him benefit from the holy friendship of Paul, to whom he knew how to hand over the glories of his apostolate.

May St. Barnabas, “Son of Consolation,” intercede for each one of us and teach us to imitate the virtues that led him to shed his own blood for the sake of the name of Christ. Amen.