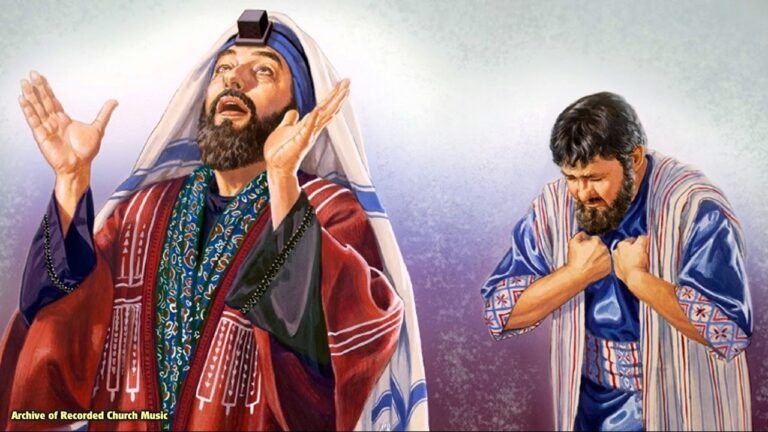 THE CORRECT ATTITUDE AT PRAYERS

Last Sunday, we reflected upon Christ’s teaching on the need to pray continuously and never lose heart. The question is, what is the manner of your persistent prayer? Better still, what attitude and virtue do you put up at prayers? This Sunday’s message comes to teach us the correct attitude and virtue at prayer. Although, it is not possible to know whether, in fact, Jesus told the two parables in sequence. It may be that Jesus spoke these parables on different occasions, and Luke arranged them that way. Be that as it may, both parables are related and complement each other. While the Parable of the Wicked Judge and the Widow emphasizes the importance of perseverance in prayer, the Parable of the Pharisee and the Publican emphasizes motivation and correct behaviour when praying.

The Parable of the Pharisee and the Publican is made up of two prayers made by two men with two different results. The Pharisees consisted of a religious party of Jews that was radically conservative. Its members prided themselves on abiding by the Law and traditions. On several occasions, Jesus confronted and rebuked representatives of this group for their hypocritical religiosity. It was common for the Pharisees to go to the Temple to pray. Because of the pious reputation they boasted, they liked to flaunt their religious status by offering prayers in public places (cf. Luke 20:47). The Publicans, on the other hand, formed a professional group who were employed by the Romans at the time of Jesus. They exercised the function of collecting taxes and customs fees. Publicans were despised by other Jews, especially the Pharisees. The reason for this is that they were considered traitors and corrupt. Unlike the Pharisees, publicans did not walk in synagogues. When they wanted to pray, they looked for the outside area of ​​the Temple which they had access to because they were Jews. This is exactly what the publican in Jesus’ parable did (he stood some distance away).

The Pharisee and the publican were in the Temple at the same time and for the same purpose: to pray. The Pharisee most likely sought a prominent place; perhaps as close as possible to the royal sanctuary in the Temple. In the Temple, the Pharisee prayed while standing, looking up to heaven. Apparently, he prayed to God, but Jesus was clear in saying that he “was praying to himself” (Luke 18:11). In other words, the Pharisee was talking about himself. His praise was aimed at his own ego. In his prayer, at no time did he confess his sins and show repentance. On the contrary, the Pharisee seemed to be trying to show God how good he was, and how privileged God was to have someone of that quality praying before him. The Pharisee focused on comparing himself to other people. But he didn’t do it in a positive sense but compared himself to others in a negative sense, that is, he claimed not to be a thief, an unjust, and an adulterer.

When he saw the publican praying, he also included him in his despised list. His self-glorification was at the expense of others’ misery. After comparing himself to other people, the Pharisee began to show off his great deeds as a doer of the Law. In fact, like a good Pharisee, he went out of his way to emphasize that he did even more than the Law commanded. He said to fast twice a week, whereas the Law required only one day of fasting a year, despite allowing voluntary fasting on any occasion (Leviticus 16:29), the Pharisees, in turn, instituted Monday and Thursday as fast days. Most likely that’s what he was talking about. The Pharisee in the parable also prided himself on paying tithes on everything he owned. The way in which the phrase is constructed in Greek indicates that he paid the tithe even for what was not required, for example, the tithe of the products he bought from a producer, which had already been paid by the producer himself. He was so presumptuous in his intentions that he basically tried to uphold the Law for others.

The publican’s prayer was very different from the Pharisee’s prayer. He stood at a distance. Unlike the Pharisee, he didn’t want to be seen, he just desperately wanted God’s forgiveness. The weight and shame of his sins made him not even dare to look up to heaven. The Word of God had crushed his ego and convinced him of his sins. Instead of self-praising himself, he recognized the state of misery in which he found himself, and beat his chest in self-accusation, crying out to God for mercy: “O God, be merciful to me the sinner.” The publican’s words were the same as the psalmist David’s when he said: “Have mercy on me, O God, according to your lovingkindness; blot out my transgressions, according to the multitude of your mercies” (Psalm 51:1). The publican’s only request was that the wrath of God be removed from him. He simply wanted to be forgiven. This he did out of humility and he was heard. Little wonder the first reading from the book of Ecclesiasticus makes clear that “The humble man’s prayer pierces the clouds until it arrives he is inconsolable, And the Lord will not be slow, nor will he be dilatory on their behalf.”

So, in the end, Jesus then declared that it was the publican, not the Pharisee, who returned home justified. He got what he so desired, peace rested upon him. The Lord concluded this parable with a very appropriate phrase, the principle of which is also present in several other biblical passages: “For whoever exalts himself will be humbled, and whoever humbles himself will be exalted” (Luke 18:14). This means that the man who considered himself justified came home a sinner. The man who admitted to being a great sinner came home justified. The meaning of the Parable of the Pharisee and the Publican is quite clear. This parable teaches that we should pray with the right attitude – humility. Does this remind us of David’s prayer of forgiveness where he said “a humbled contrite heart you will not spurn?”

On the practical lessons in today’s readings: First, the Parable of the Pharisee and the Publican teaches that God forgives errors and not justification. In himself, the Pharisee considered that he had nothing to repent. Therefore, he also had nothing to be forgiven for. When someone fails to recognize his own sin, it can be a sign of something far more serious than just pride; it may even mean the absence of genuine regeneration (cf. 1 John 1:8-10). Second, the Parable of the Pharisee and the Publican teaches that God cannot be impressed. The Pharisee tried to impress God; he did this by comparing himself to other people and showing how superior he was to them. He thought he was different and above everyone else! The publican, in turn, also compared himself to other people, but he considered himself inferior to all of them. He classified himself as “the sinner.” The apostle Paul did the same when he wrote, “Christ Jesus came into the world to save sinners, of whom I am chief” (1 Timothy 1:15). Thirdly, the Parable of the Pharisee and the Publican teaches that glory belongs to God alone. The publican’s prayer expresses a truth present throughout the Bible, declaring that salvation, from beginning to end, belongs to God and is attributed to his mercy and grace (cf. Psalm 51:1; Luke 18:13; Ephesians 2: 8; Titus 3:5). Thus, Man is incapable of justifying himself. The Pharisee’s prayer apparently appeared to be a prayer of gratitude, however, it was a parody of gratitude. That is why, in human eyes, such a prayer could really represent the words of someone just and distinguished by their religiosity. However, in the eyes of God, such a prayer was an affront, an offense, because in fact it attacked the glory of God, and tried to provide human complements to the perfect work of redemption. Fourth, the Parable of the Pharisee and the Publican teaches that human praise can be perverse and deceitful. When the Pharisee began to congratulate himself, he said he was not a thief, a dishonest, and an adulterer. William Hendriksen, in his commentary on the Gospel of Luke, makes a very apt remark on this. He realizes that whatever the Pharisee said was not, in fact, what he was. The Pharisee was the thief who at that very moment stole the glory of God in the words of his prayer. He was the dishonest man who defrauded himself. Lastly, he was the adulterer guilty of the worst of all adulteries, in falling away from the true God (cf. Hosea 1:2; 5:3).

Above all, the Parable of the Pharisee and the Publican invites us to make an important self-examination. We must look at our lives and evaluate our conduct before the Word of God, after all, Pharisees and publicans are still scattered everywhere. May we point our eyes to Christ alone; that we may acknowledge that by his merits alone we are justified before God. It is in Christ that we find rest for our souls. Here are some questions to ask: Do you look like the man who went home justified today or the man who didn’t get forgiveness? When you look at your own life through the mirror of Scripture, who do you see: The Pharisee or the publican? Surely we can all see ourselves in some way through Jesus’ words in the Parable of the Pharisee and the Publican.