HOLY WEEK (THE PASSION WEEK): THE LAST WEEK OF JESUS BEFORE THE CRUCIFIXION 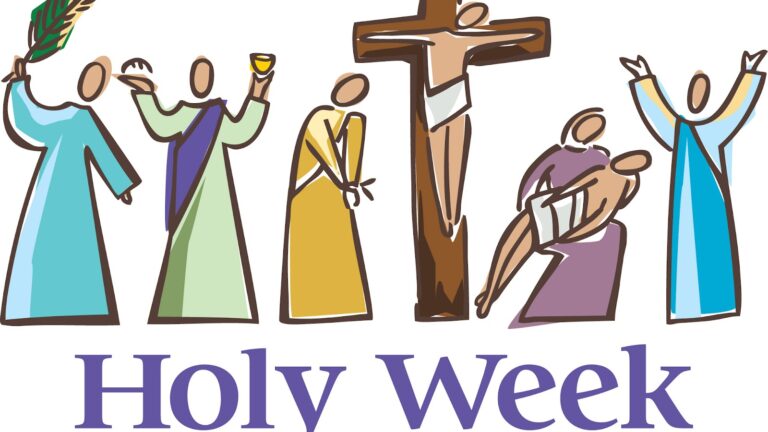 Beloved friends, we have stepped into what the Church traditionally calls “Holy Week.” Holy Week demonstrates the last week of Jesus before his crucifixion – the week which precedes the great festival of the Resurrection on Easter Sunday, the final week of Lent. Holy Week begins with Palm Sunday and ends with Holy Saturday, the day before Easter Sunday.

In these articles, I shall guide you with a step-by-step explanation of every event that occurred in this holy week; also known as the Passion Week, which ushers us into the Greatest Feast of the Church – Easter Sunday, with the corresponding prayers to be said for each day.  Some of these events are recorded in the four Gospels, while others are registered only in one or two Gospels.

Palm Sunday opens up the Holy Week, for it celebrates the triumphant entry of Jesus Christ into Jerusalem, a few days before suffering passion, death, and resurrection (Matthew 21: 1-11; Marcos 11: 1-11; Luke 19: 28-44; John 12: 12-19). This Sunday is called so because the people cut branches of trees, and leaves of palm trees to spread on the ground where the Lord would ride in a donkey. With this, he awakened, in the minds of the priests of the time and teachers of the law, envy, mistrust, and fear of losing power. Then they began a plot to condemn him to death.

Jesus entered the city of Jerusalem riding a colt. As he entered Jerusalem toward the temple, many stretched their robes and branches of the trees along the way. In this event, there is a clear connection with the prophecies registered in the Old Testament. The prophet Zechariah prophesied exactly about this event. He spoke about a fair and humble king that would bring salvation, and that he would come mounted on a donkey (Zechariah 9:9). In addition, a messianic psalm directly celebrates the procession of the Messiah (Psalm 118). At the triumphant entry, the crowd chanted the phrases of verse 26 of Psalm 118 – “Blessed is he who comes in the name of the Lord…”

A popular error that is commonly preached on this day relates to the crowd that shouted “Hosanna in the highest” on Palm Sunday as being the same crowd that shouted “Crucify him” on Good Friday. How can we understand this? Pope (Emeritus) Benedict XVI teaches in his book “Jesus of Nazareth” that it was not the same crowd. For him, all three Synoptic Gospels, as well as Saint John, make it very clear that the scene of Messianic homage to Jesus was played out on his entry into the city and that those taking part were not the inhabitants of Jerusalem, but the crowds who accompanied Jesus and entered the Holy City with him. This point is made most clearly in Matthew’s account through the passage immediately following the Hosanna to Jesus, Son of David: “When he entered Jerusalem, all the city was stirred, saying: Who is this? And the crowds said: This is the prophet Jesus from Nazareth of Galilee” (Mt 21:10–11). . .  People had heard of the prophet from Nazareth, but he did not appear to have any importance for Jerusalem, and the people there did not know him. Therefore, the crowd that paid homage to Jesus at the gateway to the city was not the same crowd that later demanded his crucifixion. While the crowd of Palm Sunday was composed of the larger group of the followers of Jesus (those who had benefitted from his teachings, miracles, kindness, etc.), the crowd of Good Friday (who shouted “crucify him”) was composed of the chief priests, elders of the people and the inhabitants of Jerusalem.

The Liturgy of Palm Sunday is not a repetition only of the gospel scene, but a sacrament of our faith, in the victory of Christ in history, marked by so many conflicts and inequalities.

The Gospels of Matthew and Mark recorded that after the triumphant entrance, Jesus spent the night in Bethany. Why is Bethany significant? This is why you must read about Monday of the Holy Week. Hit the link below for Great and Holy Monday, Tuesday, and Wednesday together with the corresponding prayer.

What an awesome explanation to clear my doubts about the crowd who turned against Jesus on Good Friday. God bless you more Fr for this insightful sharing

The crowd that paid homage to Jesus at the gateway to the city was not the same crowd that later demanded his crucifixion. While the crowd of Palm Sunday was composed of the larger group of the followers of Jesus (those who had benefitted from his teachings, miracles, kindness, etc.), the crowd of Good Friday (whoshouted “crucify him”) was composed of the chief priests, elders of the people and the inhabitants of Jerusalem.
Thanks for this

Padre, we keep hearing that it is the same crowd o, how will this narrative be corrected?

Thanks for this Padre. We keep learning.

Thank you so much padre ‘for this explanations.
We keep on hearing’ that is the same people that shouted hosanna ‘also shouted crucify him.
Great job padre.more wisdom from above in jesus name amen.