HAS ANYONE EVER SEEN GOD? 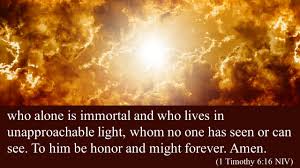 Several times in Scripture, some persons or people were said to have seen God, yet in other Scriptural pages, confusions may arise with regards to the statement: “No one can see God and yet live…” etc. This piece, therefore, seeks to clarify this seeming contradiction or controversy.

WHEN GOD WAS ‘SEEN’

YET HE HASN’T REALLY BEEN SEEN

It appears that God was seen in the verses above, which may appear to be in contradiction with the other verses claiming that no one can see God. The first thing to understand is that people were seeing visions, or dreams, or the Angel of the LORD (Num. 22:22-26; Judges 13:1-21) and not really God Himself. Secondly, in the verses above that clearly stated that God was seen, it must be understood that God’s divine nature was not seen or contemplated as He really is, but only appearances in a bearable visible form. We were told that God led the Israelites in the form or pillar of cloud by day and fire by night. But does it mean that God is a cloud or fire? When God appeared to Abraham in a visible form of three men, does that reflect his divine nature as He really is? For God to tell Moses that no one can see His face and live, should be understood that God revealed Himself to Moses in the way Moses could withstand (visible and bearable form, either in the form of cloud or fire…) The same goes for God in the various bearable forms He might appear to various persons in the Old Testament.

When Christ came into the world, He didn’t come under His divine nature but in human form. Those who saw Jesus apparently “saw” God, but not in his divine state as the Eternal Word of God. AGAIN, NO MAN CAN SEE OR CONTEMPLATE GOD AS HE REALLY IS AND LIVE. Therefore, Jesus is teaching that no one has seen God as He is, because that’s impossible.

Again, no one has ever seen Jesus’, the Son of God’s divine nature, since He became flesh and veiled His glory for the sake of our redemption (cf. Phil 2:4-11). Even the Transfiguration wasn’t a glimpse of Jesus’ divine nature since it is no less bearable than the Father’s—the divine nature of the Father, Son and Holy Ghost is one nature.

Nevertheless, those in heaven have seen and contemplated the face of God, for seeing His face is the glory and happiness of heaven: “We shall see Him as He really is, and His name will be written on our foreheads…” (cf. Rev. 22:4)

Above all, the problem with our comprehension of the Scriptures lies in the fact that we are trapped in the twenty-first Century where many tend to misinterpret literally the words of Scripture without considering the other senses – Spiritual: Allegorical, Anagogical, and Moral. Thus, many are tempted to understand the Scriptures from the standpoint of what appears to them, without making efforts to study deeper, which is in most cases leads to a poor interpretation and understanding.

This just makes me desire to be pure in heart that I may see the face of God!

May the good Lord help you to achieve this desire…

This just makes me want to be pure in heart that I may see the face of God (Matt. 5:8)

This is indeed a wonderful piece.
I must see God as He really is. So help me Lord