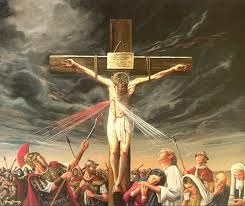 It is common to hear the expression “Christ died on the cross for us”, but what does it mean? How did the redemption of the sins of humanity through the death of Our Lord Jesus Christ work in practice?

In the Old Testament, animals were sacrificed, as there was a covenant between God and the people of Israel, in which they were to fulfil that covenant by obeying the Law. It was up to the people to be faithful; however, the Law was very strict such that it was almost impossible to even keep the letters. In this way, mechanisms were created for the so-called “atonement”, through which the people would be redeemed from their faults. A day in the year was dedicated to the atonement – “Yom Kippur.” The High Priest entered the Holy of Holies, the most sacred place in the Temple – where he pronounced the Name of God (YHWH) and sprinkled the mercy seat with the blood of the “victims.” The mercy seat was the place where God was. The blood meant that man, in fact, deserved death, because he had not obeyed the Law. By throwing the blood full of miseries in that holy place, it became purified because of the presence of God. The Most Holy (God) purified the blood (people). Now, soon the prophets began to denounce the insufficiency of these cults and sacrifices. It was evident that the blood of bulls, goats and sheep did not purify anything. The sacrifice was always incomplete and needed to be repeated every year. And since it was God’s desire for men to obey Him, to keep the Law fully. And, for the people to keep the covenant, it was necessary that they have a new heart. It was the prophet Ezekiel who gave the key: “I will give you a new heart and put a new spirit within you; I will take away your heart of stone and I will give you a heart of flesh” (Ezk. 36:26). The Old Testament closes, therefore, with this great expectation: a new heart! And the promise was fulfilled in Jesus Christ. Put differently, Israel was given hope from God, who promised to send a messiah for the redemption of sins in order that they might have a new heart. The Jewish prophet Isaiah prophesied the coming of the Messiah, the suffering servant, “Because of his affliction he shall see the light in fullness of days; Through his suffering, my servant shall justify many, and their guilt he shall bear. Therefore I will give him his portion among the great, and he shall divide the spoils with the mighty because, he surrendered himself to death and was counted among the wicked; And he shall take away the sins of many, and win pardon for their offences (Isaiah 53:11-12).” Thus, God became man to give man a new heart, an obedient heart that has fulfilled the Law completely and the Perfect Covenant in the person of His beloved Son, Our Lord Jesus Christ. The perfect union between God and man takes place in the person of Our Lord Jesus Christ. The Catechism of the Catholic Church summarizes this reality masterfully: “When St. Paul speaks of Jesus whom ‘God put forward as an expiation by his blood’, he means that in Christ’s humanity, God was in Christ reconciling the world to himself.” (CCC #433)

Dear brothers and sisters, Jesus is the mercy seat! By shedding His blood on the Cross, the victim’s blood touches the mercy seat, so to speak, and there the definitive atoning sacrifice takes place, however perfect. On the Cross, the pure and immaculate Jesus takes upon himself the sins of humanity. No longer symbolically, as in the Old Testament, but in a real way. Misery, sin, disgrace, death touch the mercy seat that is Jesus and everything is washed, purified, set free. This was why Christ’s death on the Cross was necessary and has become our redemption.

Throughout the New Testament, it is clearly stated again and again that our sin was dealt with once and for all on the cross. Paul, for example, writes to the Galatians: “Christ redeemed us from the curse of the Law, having become a curse for us—for it is written, ‘Cursed is everyone who hangs on a tree,'” (Gal. 3:13). Christ redeemed us from our legal guilt according to God’s law by becoming a curse on our behalf. When did He do that? When He was hung upon a “tree” (i.e., the cross).  Paul makes this point even more clear in his letter to the Colossians, not only writing: “For it was the Father’s good pleasure for all the fullness to dwell in Him, and through Him to reconcile all things to Himself, having made peace through the blood of His cross; through Him, I say, whether things on earth or things in heaven,” (Col. 1:19-20). God “made peace” through the blood of the cross. There He cancelled our certificate of debt by nailing it to the cross. It is through the cross that He has “forgiven us all our transgressions.” As Paul likewise said to the Romans: “for all have sinned and fall short of the glory of God, being justified as a gift by His grace through the redemption which is in Christ Jesus; whom God displayed publicly as a propitiation in His blood through faith. This was to demonstrate His righteousness because, in the forbearance of God He passed over the sins previously committed,” (Rom. 3:23-25). Peter similarly writes: “knowing that you were not redeemed with perishable things like silver or gold from your futile way of life inherited from your forefathers, but with precious blood, as of a lamb unblemished and spotless, the blood of Christ,” (1 Peter 1:18-19). Peter teaches that we were redeemed by Jesus’ blood, like the sacrificial offering of a lamb without blemish (i.e., a sin offering on our behalf). He further explains his point in the next chapter: “and He Himself bore our sins in His body on the cross, so that we might die to sin and live to righteousness; for by His wounds you were healed,” (1 Peter 2:24). In consonance, John tells us in Revelation that even the heavenly hosts praise Jesus for purchasing (i.e., redeeming) people for God by His blood (i.e., on the cross): “Worthy are You to take the book and to break its seals; for You were slain, and purchased for God with Your blood men from every tribe and tongue and people and nation,” (Revelation 5:9). Even Jesus Himself declared His work of redemption to be finished at the moment of His death, as we read in John’s gospel: “Therefore when Jesus had received the sour wine, He said, ‘It is finished!’ And He bowed His head and gave up His spirit,” (John 19:30).

Fellow redeemed in Christ, through these citations above and many other like passages, the New Testament makes clear that our redemption was fully accomplished, once and for all, on the cross. What is left for us to cooperate with the grace offered to us through the redemptive death of Christ by frequenting the Sacraments. Remember that at His pierced side, blood and water gushed forth (cf. Jn. 19:34). This blood and water will signify for us, the Sacraments of the Church – baptism and the Holy Eucharist (according to St. Augustine). This season should make us realize how we must live and depend on these Sacraments. After being baptized, we must continually “eat His Body and drink His Blood in order that we might have life in us. This is the very life of God; the life that He would give us on the last day – “and I will raise him up on the last day” (Jn. 6:54). Therefore, if we are hindered from receiving the Most Precious Body and Blood of Christ due to our sins, we must frequent the Sacrament of Reconciliation/Confession. The moment to start is now…

May the Lord bless His words in our hearts. Amen.

Christ died for me so I will live my life for him, cooperating with his Grace through the sacraments of the church. Amen

May we gain the kingdom of God through the sacrifice offered for us by Christ Jesus himself….