FELLOW CATHOLICS! “THE BOOK OF REVELATION CLEARLY EXPLAINS THE CATHOLIC HOLY MASS” – BE PROUD OF YOUR CATHOLIC HERITAGE – KINDLY SHARE! 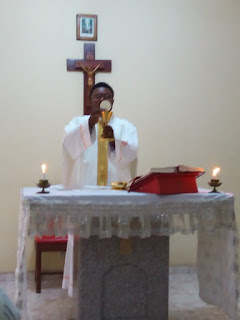 FELLOW
CATHOLICS! “THE BOOK OF REVELATION CLEARLY EXPLAINS THE CATHOLIC HOLY MASS” –
BE PROUD OF YOUR CATHOLIC HERITAGE – KINDLY SHARE!
Dear friends in Christ, Happy Sunday!!!
I present before you a view of the Holy Mass from the perspective of the Book
of Revelation. At the end of this post you shall agree with me that the Earthly
Liturgy of the Holy Mass is indeed a foretaste of the Heavenly Liturgy as
described in the Holy Book. Here is a consideration of how the Mass is intended
to mirror the Heavenly liturgy seen by St. John in the Book of Revelation:
INTRODUCTORY RITES OF
THE MASS:
1. Consecrated Celibacy of the Priesthood
–
“These are they who were not defiled with
women: for they are chaste. These follow the Lamb wherever he goes. These were
purchased from among men, the first fruits to God and to the Lamb.” (Rev
14:4)
2. The Priest in his priestly
vestmentgarment (as the one who presides) –
“And in the midst of the seven golden
candlesticks, one like to the Son of man, clothed with a garment down to the
feet, and tied a girdle of gold around his waist.” (Rev 1:13)

3. The Sign of the Cross –
“And he cried with a loud voice to the four
angels to whom it was given to hurt the earth and the sea, saying: Hurt not the
earth nor the sea nor the trees, till we sign the servants of our God in their
foreheads.” (Rev 7:3) Also, “And
they shall see his face: and his name shall be on their foreheads.” (Rev 22:4)
4. The Penitential Rite –
“Be mindful therefore from whence you are
fallen: and do penance and do the first works.” (Rev chapter 2)
5. The Gloria hymn (Glory to God…) –
“And I saw as it were a sea of glass mingled
with fire: and them that had overcome the beast and his image and the number of
his name, standing on the sea of glass, having the harps of God: And singing
the canticle of Moses, the servant of God, and the canticle of the Lamb,
saying: Great and wonderful are your works, O Lord God Almighty. Just and true
are your ways, O King of ages. Who shall not fear you, O Lord, and magnify your
name? For you only are holy. For all nations shall come and shall adore in your
sight, because your judgments are manifest.” (Rev. 15:2-4)
THE
LITURGY OF THE WORD:

1.
Readings –
“And I saw, in the right hand of him that
sat on the throne, a book, written within and without, sealed with seven seals.
And I saw a strong angel, proclaiming with a loud voice: Who is worthy to open
the book and to loose the seals thereof?” (Rev 5:2)

2. The Alleluia (before the Gospel
Reading) –
“After these things, I heard as it were the
voice of much people in heaven, saying: Alleluia.
Salvation and glory and power belong to our God. For true and just are his
judgments, who has judged the great harlot which corrupted the earth with her
fornication and has revenged the blood of his servants, at her hands. And again
they said: Alleluia. And her smoke ascends forever and ever. And the four and
twenty ancients and the four living creatures fell down and adored God that
sits upon the throne, saying: Amen. Alleluia. And a voice came out from the
throne, saying: Give praise to our God, all you his servants: and you that fear
him, little and great. And I heard as it were the voice of a great multitude,
and as the voice of many waters, and as the voice of great thunders, saying:
Alleluia: for the Lord our God, the Almighty, has reigned.” Alleluia!!!
INTERCESSORY
PRAYERS–
“And when he had opened the book, the four
living creatures and the four and twenty ancients fell down before the Lamb,
having every one of them harps and golden vials full of odours, which are the prayers of saints.” (Rev 5:8)
LITURGY OF THE
EUCHARIST: 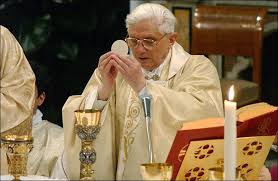 1. The host (the Holy Communion) –
“He that has an ear, let him hear what the
Spirit says to the churches: To him that overcomes I will give the hidden manna and will give him a white
counter: and in the counter, a new name written, which no man knows but he that
receives it.” (Rev. 2:17)

2. Sanctus (Holy Holy Holy…) –
“And the four living creatures had each of
them six wings: and roundabout and within they are full of eyes. And they
rested not day and night, saying: Holy, Holy, Holy, Lord God Almighty, who was
and who is and who is to come.” (Rev 4:8)

3. Great Amen (at the doxology) –
“He that gives testimony of these things,
says: Surely, I come quickly: Amen.
Come, Lord Jesus.” (Rev 22:20)
4. Agnus Dei – (Lamb of God…)
“And I saw: and behold in the midst of the
throne and of the four living creatures and in the midst of the ancients, a
Lamb standing, as it were slain, having seven horns and seven eyes: which are
the seven Spirits of God, sent forth into all the earth” (Rev 5:6)
5. Silent Adoration (usually after
communion) –
“And when he had opened the seventh seal,
there was silence in heaven, as it were for half an hour.” (Rev 8:1)
OTHERS:
1. Use of Incense –
“And another angel came and stood before the
altar, having a golden censer: and there was given to him much incense that he
should offer of the prayers of all saints, upon the golden altar which is
before the throne of God. And the smoke of the incense of the prayers of the
saints ascended up before God from the hand of the angel. And the angel took
the censer and filled it with the fire of the altar and cast it on the earth:
and there were thunders and voices and lightning and a great earthquake.”
(Rev 8:3)
2. Prayer to St. Michael the Archangel
–
“And there was a great battle in heaven:
Michael and his angels fought with the dragon, and the dragon fought, and his
angels. And they prevailed not: neither was their place found any more in
heaven.” (Rev 12:7-8)
Having seen all these, I’m sure you will agree with me that
the Earthly Liturgy (the mode of worship in the Catholic Church on earth) of
the Holy Mass is just a foretaste of the Heavenly Liturgy (mode of worship in
Heaven as described by St. John)
Dear friends in
Christ, those who have ears, eyes…etc., let them comprehend!!!
For those who have
not attended Holy Mass today, kindly create time and go… The Lord awaits you
there, to pour out his heavenly blessings on you… Shalom!
Happy Sunday!