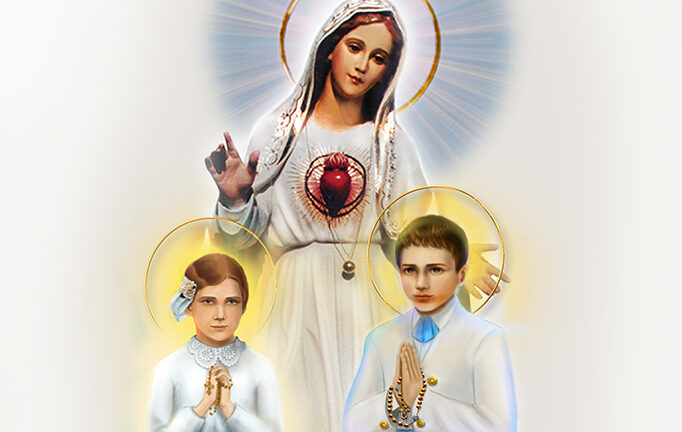 On the 19th anniversary of the attempt to assassinate him, Pope John Paul II listened as his top aide announced the pope’s decision to reveal the so-called ”third secret of Fatima.” Cardinal Angelo Sodano, Vatican secretary of state, told the people gathered in Fatima on May 13, that the pope believes the secret refers to the assassination attempt and to the church’s struggle against communism.

At the Mass of the beatification on May 13, 2000, at the Basilica of Our Lady of the Rosary, Fátima, Portugal, Pope John Paul II once again thanked Our Lady of Fatima for saving his life when he was shot May 13, 1981, before an estimated 600,000, people and he spoke of the ”horrors” of the 20th century, which he said were foretold by Mary in the Fatima messages. In making the announcement about the secret, Cardinal Sodano said it ”concerns, above all, the war waged by atheist systems against the church and Christians.” But it also refers to the ministry and suffering of a ”bishop clothed in white,” whom the children believed was the pope, Cardinal Sodano said. The cardinal said that in the secret, as the pope ”makes his way with a great effort toward the Cross amid the corpses of those who were martyred — bishops, priests, men and women religious and many laypersons — he, too, falls to the ground, apparently dead under a burst of gunfire.”

It was Mehmet Ali Agca, a Turk, who tried to assassinate the pope in St. Peter’s Square on the feast of Our Lady of Fatima in 1981. Cardinal Sodano said that after the shooting ”it appeared evident to His Holiness that it was ‘a motherly hand which guided the bullet’s path,”’ saving the pope’s life. Pope John Paul has directed the Congregation for the Doctrine of the Faith to prepare a commentary to help people understand the message, then to make the message and the commentary public, the cardinal said.

In his Mass homily, Pope John Paul said the Fatima children demonstrated how ”little ones” may be able to grasp important truths more quickly than their elders. In the course of the 20th century, the pope said, thousands and thousands of people died in the struggle between good and evil. ”My thoughts go to the horrors of the two ‘great wars’ and those of other wars in many parts of the world, to the concentration and extermination camps, the gulags, ethnic cleansing and persecutions, terrorism, kidnapping, drugs, the attacks on the unborn and on the family,” he said. In Mary’s message at Fatima, the pope said, ”these times of tribulation were foretold, and Our Lady asked for prayers and penance to abbreviate them.” ”Today I want to thank heaven for the strength of the testimony” given by Jacinta and Francisco, he said. ”And, once again, I want to celebrate the Lord’s goodness to me, when, seriously struck that May 13, 1981, I was saved from death,” Pope John Paul said. ”I express my recognition also to Blessed Jacinta for her sacrifices and prayers for the Holy Father, whom she had seen suffer much,” the pope said, referring to part of the Fatima message.

As a sign of his gratitude to Mary, the pope sent one of the bullets used in the assassination attempt to Fatima. It is now embedded in the crown on the statue of Our Lady of Fatima at the shrine.

Arriving in Fatima on May 12, the pope knelt in prayer near the statue before leading a brief prayer service. Approaching the statue, he left a small red box and an envelope at Mary’s feet. The box contained the gold ring that the late Polish Cardinal Stefan Wyszynski of Warsaw gave him shortly after his election as pope. The cardinal had told the pope that he would lead the church into the third millennium.

The pope met privately with Sister Lucia in the basilica at the Fatima shrine before the beatification Mass. The Holy Father asked Sister Lucia how old she is, Navarro-Valls said. When the nun replied, ”93,” they both smiled. As she sat by Francisco’s tomb waiting for the pope, Sister Lucia responded briefly to reporters’ questions. She said she was ”very happy” that her cousins were being beatified.

Already informed of the pope’s decision to reveal the secret, which she had written down in 1943 and placed in a wax-sealed envelope, Sister Lucia said, ”It is a day of glory for God and for Our Lady.” She said the only thing she had to tell the world was: ”Try to be faithful to God and thankful for his graces.” During the beatification Mass, the pope asked children to try to be like Jacinta and Francisco in listening to Mary and following her to Jesus.

Years later, history was made at the shrine of Fatima at 10:30 a.m. on May 13, 2017 (100 years after the apparition), when Pope Francis declared that Francisco Marto and his sister Jacinta are saints. Francisco and Jacinta are the first child saints who are not martyrs in the history of the church. Francisco, Jacinta, and their cousin Lucia are buried here side by side in

the basilica. Before Mass, Pope Francis prayed in silence at the tombs of the three shepherd children. When Jacinta’s body was exhumed before being brought here, 15 years after her death, it was found to be totally uncorrupted. Because of this, the local bishop asked Lucia, by then a contemplative nun, to write the memoirs of Jacinta and Francisco, detailing the extraordinary events that have so powerfully impacted the lives of believers ever since.

Lucas Batista Maeda de Mourao, a ten-year-old Brazilian boy who was miraculously cured through the intercession of Francisco and Jacinta, was here for the canonization. Four years ago, he fell from the window of his grandfather’s home and suffered such serious brain damage. As his distraught father picked him up off the sidewalk to take him to the hospital, he invoked the intercession of Our Lady, Francisco, and Jacinta. That same night he and a local community of Carmelite nuns prayed to the two young seers to intercede with God to cure the boy. Some days later, to the amazement of the doctors, the young boy got up and walked home completely cured. Last February, the Vatican’s Congregation for the Causes of Saints concluded unanimously that his cure could not be scientifically explained. Pope Francis recognized his cure as the miracle that opened the door to their canonization. The pope embraced and kissed Lucas tenderly when he brought up the offertory gifts.

Pope Francis remarked that “we have gathered here to give thanks to God for the countless graces bestowed over these past hundred years” starting here in Portugal and extending to “the four corners of the earth.” He reminded those gathered that Our Lady introduced Saints Francisco and Jacinta “into the immense ocean of God’s light and taught to adore him” and that this was “the source of their strength in overcoming opposition and suffering.” Using references to the secrets of Fatima, Pope Francis’ words suggested that he was referring to the dramatic situation in the world today and his own ministry “as a bishop dressed in white.” The Holy Father recalled that Jacinta was granted a vision and asked, “Do you not see all those streets, all those paths, and fields full of people crying out for food, yet have nothing to eat? And the Holy Father in a church, praying before the Immaculate Heart of Mary? And all those people praying with him?” He thanked the crowds for coming to pray with him and said—as he also mentioned in his prayer yesterday at the chapel of the apparitions—that he had come “to venerate the Virgin Mary and to entrust to her all her sons and daughters. Under her mantle they are not lost; from her embrace will come the hope and the peace that they require.” He said, too, that he had come here to entrust to her, and to pray for hope and peace, for all Christians—“all my brothers and sisters in baptism”, and for all members of “our human family, especially the sick and the disabled, prisoners and the unemployed, the poor and the abandoned.” He reminded believers that “God created us to be a source of hope for others, a true and attainable hope, in accordance with each person’s state of life”—as Sr. Lucia said Our Lady asked for, and in this way “God effects a general mobilization against the indifference that chills the heart and worsens our myopia. We do not want to be a stillborn hope! Life can survive only because of the generosity of other lives.”

The message of Our Lady here one hundred years ago—calling for prayer, conversion, sacrifice, and trust in God’s mercy—has lost none of its relevance for the 21st century. 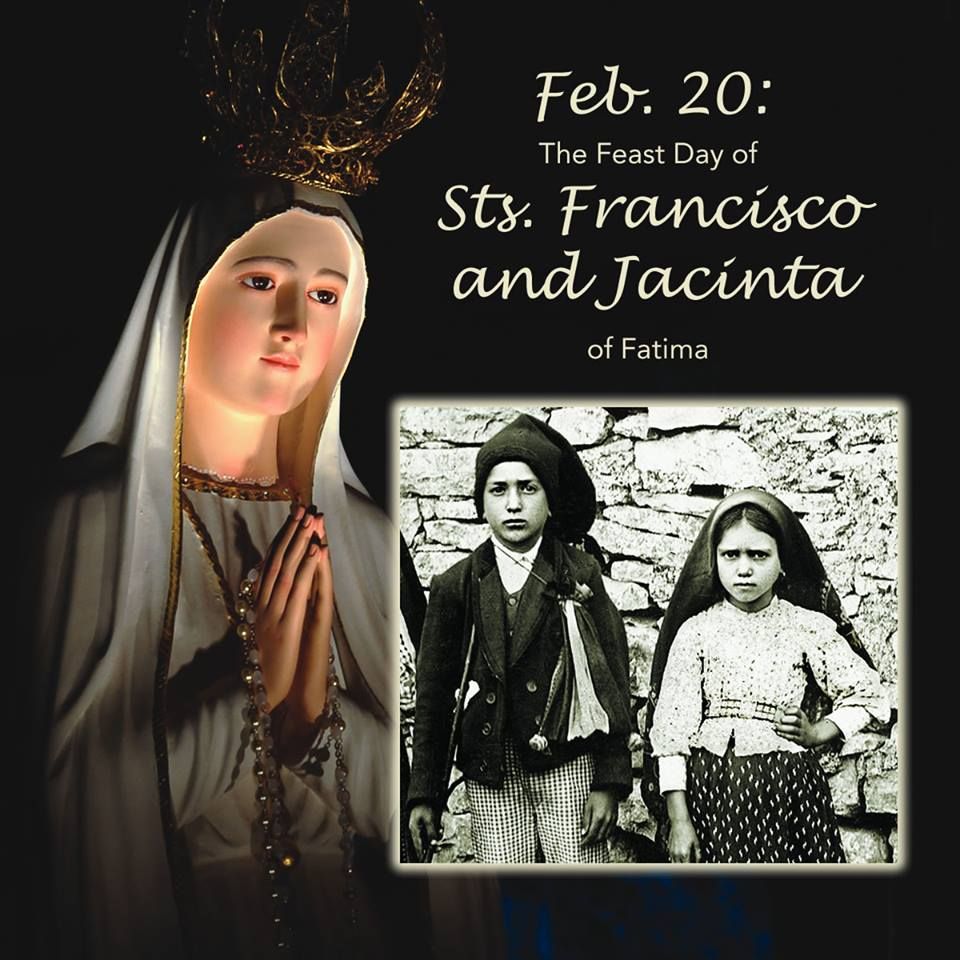 God bless you padre and keep you ever relevance in His vineyard.
Educative and inspiring.

Sts. Francisco and Jacinta of Fatima intercede for me concerning my intentions, pray for me. Amen

Oh Lord thank you for revealing to me an unworthy servant like me.
Thank you Fr for inspiring me
Our Lady of Fatima listen to the prayers of sts. Francisco. Jacinta and Lucia as I handover my children to you especially my son Oliverjude who is not serious with his studies and things of God. Drawing him closer for the best I pray
Amen

“Life can survive only because of the generosity of other lives.”

SS Francisco and Jacinta, pray for us!

Thanks Padre for the enlightenment on the Fatima Apparitions.
Please, I understand that Lucia lived for over 95 years. But there was no record of when she finally died.
My second question is why did Our Lady decree that Jacinta and Francisco should die young?
Thirdly, is Lucia now a saint?

2. Our Lady didn’t decree that they die young. She only communicated the will of God to them, which is, the utmost good of their souls – heaven!

3. Lucias has not been recognized by the Church as a saint yet, inasmuch as she has all it takes to be one. It takes some time and processes to get to that point. For Jacinta and Francisco, it took 100 years…

To be honest, it has been a “hold-back-tears” experience since the beginning of these reflections on Fatima. I cannot thank God enough for the gift of His mother to the Church, and to me particularly.
Even as we continue to pray for peace and love in Nigeria. Our Lady Queen and Patroness of Nigeria, Pray for us.

I love you Mama.