EXPLAINING THE + SIGN OF THE CROSS WITH SCRIPTURAL & THEOLOGICAL SIGNIFICANCE 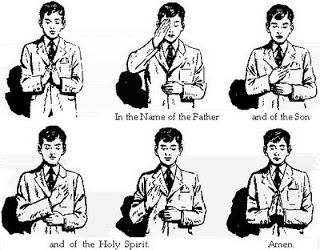 EXPLAINING THE + SIGN OF THE CROSS WITH SCRIPTURAL & THEOLOGICAL SIGNIFICANCE?

Hi Chinaka, though I’m not a catholic but I’ve read many of your online posts. I would like you to clarify me, giving reasons why Catholics make the sign of the cross. I really need to understand this act. Kindly post it on the social media please.

RESPONSE:The “Sign of the Cross” is often seen as an outward act by which “Catholics” could be identified; a simple way by which Catholics bind on themselves, the strong name of the Blessed Trinity, by the invocation of the Father, the Son, and the Holy Spirit, while at the same time, tracing the cross through the forehead, the chest and the shoulders. Sometimes, non-Catholics also do this as well. Contrary to what our separated brethren think, the Sign of the Cross dates back to the earliest times. In third century, Tertullian wrote, “At every forward step and movement, at every going in and out, when we put on our clothes and shoes, when we bathe, when we sit at table, when we light the lamps, on couch, on seat, in all the ordinary actions of daily life, we trace upon the forehead the sign.” A number of other Church Fathers also attest to the use of the Sign of the Cross early on, including St. John Chrysostom and St. Cyril of Jerusalem. Originally, a small cross was traced by the thumb or finger on one’s own forehead. While it is difficult to pinpoint exactly when the switch was made from tracing a small cross on the forehead to the modern practice of tracing a larger cross from forehead to chest and shoulder to shoulder, we do know that the switch had occurred by the eleventh century A.D., when the Prayer Book of King Henry provides an instruction to “mark with the holy cross the four sides of the body.”
THE SIGN OF THE CROSS IN THE SCRIPTURE

For Catholics, the Sign of the Cross does not need to be explicitly recorded in the Scriptures in order to justify its use. The Sign of the Cross simply affirms in gestures the core of the creed—the existence of the Trinity and the crucifixion of Jesus. Only the most reactionary of anti-Catholic prejudices would see in this gesture something to be argued against. However, it just so happens that there is compelling biblical evidence that supports this practice.

In Revelation 7, John witnesses four angels at the four corners of the earth, holding back storm winds ready to wreak havoc on the earth and sea. Then I saw another angel come up from the East, holding the seal of the living God. He cried out in a loud voice to the four angels who were given power to damage the land and the sea, “Do not damage the land or the sea or the trees until we put the seal on the foreheads of the servants of our God.” I heard the number of those who had been marked with the seal, one hundred and forty-four thousand marked from every tribe of the Israelites (Revelation 7:2-4.)

Catholic commentators have traditionally associated the seal on the foreheads of the servants of God with the Sign of the Cross. (For example, see the Haydock Bible Commentary here and Scott Hahn’s book Signs of Life: 40 Catholic Customs and Their Biblical Roots.)

The book makes two more references to a “sign” on the forehead. In Revelation 14:1, John sees the same assembly of believers with the “name” of the Father and Son on their foreheads. And, in Revelation 22:4, while an angel is leading John on a tour of the New Jerusalem that descended out of heaven, he is told that the servants of God who live in the celestial city will have God’s name on their foreheads.

The idea of a sign or a seal marking members of the Church as God’s own also surfaces elsewhere in the New Testament. In 2 Corinthians 1:22, Paul writes that, “the one who gives us security with you in Christ and who anointed us is God; he has also put his seal upon us and given the Spirit in our hearts as a first instalment.” Similar language is used in Ephesians 1:13 and 4:30, in which Paul talks about how Christians have been “sealed” with the Holy Spirit.

Although often translated as sealed, the Greek word in these three texts is the same as the one used in Revelation 7:3, sphragizō, which one biblical concordance defines as to set a seal upon, mark with a seal, to seal for a number of purposes, including security from Satan and to prove one’s testimony to a person that he is what he professes to be.

In the sixteenth century, one of the central tenets of the Protestant Reformation was “sola scriptura,” whereby any practice that didn’t line up with Scripture was jettisoned. The English Reformers believed the use of the sign of the cross should be left up to the individual.

The sign of the cross has a rich symbolism, springing from our scriptural belief. The shape of the sign is a reminder of the ‪CROSS of Christ. Historically, the sign has also been understood as representing the ‪TRINITY: Father, Son, and Holy Spirit. Through faith in the Lord Jesus Christ and His substitutionary death on the cross, salvation is extended as a free gift to all of humanity. The doctrine of the Trinity teaches the Godhead: one God existing in three distinct and united persons. Both doctrines are foundational to both Catholics and Protestants and are certainly well-founded biblically. The sign of the cross has at certain points been associated with supernatural powers such as repelling evil, demons, etc., and of course, it is; because at the presence of God, every other powers must submit. However, it is not a good-luck charm or for magical benefits or something.

From what we have seen so far, it is unfortunate that many persons simply go through the motions of the act of signing themselves with the cross without a knowledge of why they do it. However, it is pertinent to note that the sign of the cross reminds us of our baptism (faith), how we were sealed with the power of the trinity; the Father, the Son, and the Holy Spirit. It reminds us of the power of God at the confessional (Sacrament of Reconciliation), and it is the symbol of our salvation, the victory of our Lord Jesus Christ over death.

Above all, may our Lord Jesus Christ who was crucified for our sake, protect us from all evils and continually bless each and every one of us +In the Name of the Father, and of the Son and of the Holy Spirit. Amen!