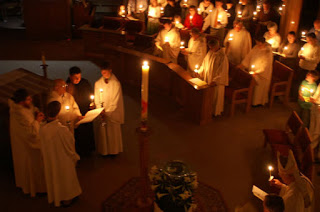 DO CATHOLICS WORSHIP LUCIFER? AN APOLOGETICAL RESPONSE:
Just 3 days ago a friend sent me a link and I was directed to YouTube where I saw the popular video condemning the Catholic Church for worshipping Lucifer at the Vatican during the Easter Vigil Mass. The video, titled “FULL BLOWN LUCIFER WORSHIP AT THE CATHOLIC VATICAN” in which the Easter Exultet was being chanted by a deacon in Latin during the Pope’s Mass and the name “Lucifer” was mentioned. The video has more than 400,000 views. I was shocked as to why the enemies of the Church would paint the Catholic Church in an evil way. Our people, they say, perish for lack of knowledge. If only the person who posted that video understood Latin and the Scripture, he would have learnt otherwise. He is just ignorant (as in, a COMPLETE OLODO), and one of the spiritual works of mercy encourages us to “instruct the ignorant”. As a result, I dare to response to the video in order to instruct him (I hope this piece gets to him) and to guide some of us that might have equally seen the video and those that are yet to see it.
In the Video, a deacon at the Vatican was chanting the Easter Exultet in Latin and that portion reads: 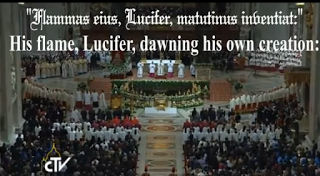 “Flammas eius lúcifer matutínus invéniat:
ille, inquam, LÚCIFER, qui nescit occásum.Christus Fílius tuus,qui, regréssus ab ínferis, humáno géneri serénus illúxit, et tecum vivit et regnat in sæcula sæculórum.”
The question(s) that arise(s) here is:
WHO IS LUCIFER (WHAT IS THE MEANING OF THE WORD LUCIFER)?
Throughout the world, if you ask people “who is Heyleel”? (hey-LEYL), majority will not know what to answer. But if you ask them, “Who is Lucifer?” you will very likely get the correct answer. People know who Lucifer is. They call him Satan. No one is in doubt as to who Lucifer is. What if you ask people, “Who is the morning star?” or “Who is the day star?” Many will say it Is Jesus. Now let’s get things right. The word Lucifer originates from Hebrew. In Hebrew, it is Known as “Heyleel” (hey-LEYL), meaning “shining one, Morning star”. The word Lucifer can also function as an adjective, meaning: “light bringing”. In Greek, it is known as “heōsphoros” a name, literally “bringer of dawn”, (that is, for the morning star). Later Christian tradition came to use the Latin word for “morning star” (Lucifer), as a proper name for the devil; (AS HE WAS BEFORE HIS FALL). This can be found in King James Version of the Bible in “Isaiah 14:12” – “How art thou fallen from heaven, O Lucifer, son of the morning!”
Although, the term appears in the context of an oracle against a dead king of Babylon, who is addressed in Hebrew as “Hêlêl Ben Šāḥar”, rendered by the King James Version as “O Lucifer, Son of the Morning!” But because of the mention of a fall from Heaven, the verse was interpreted by Christians as a reference to Satan, (because Satan himself was expelled from heaven and he fell to the earth), even though it is literally a reference to the King of Babylon (cf. Isaiah 14: 12-17).
As a result, “‘Lucifer’ became a by-word for satan and in popular Christian usage. In this context, we can say that the devil, before his fall was identified as the “morning star” (that is, Lucifer). This is a honourable name, because he was privileged to participate in the “One True Light”, who is Christ himself (as mentioned by John in his gospel, John 1:1-18). We were made to understand that he was second to God, but the sin of PRIDE led to his fall. After his fall, he became known as Satan or Devil…or whatever evil name that can be attributed to him.
However, Our Lord Jesus Christ identified himself as “LUCIFER” (That is, the “MORNING STAR” OR “DAY STAR”). Look at these scripture verses:
In Rev 22:16 – “I, Jesus, have sent my angel to give you this testimony for the Churches. I am the Root and the Offspring of David, and the bright MORNING STAR.”.
Even St. Peter attributed this title to Our Lord Jesus Christ in 2 Peter 1:19: “We have also a more sure word of prophecy; where unto you do well that you take heed, as unto a light that shines in a dark place, until the day dawn, and the ‘DAY STAR’ arise in your hearts:”
Now, the next question is If the word “Lucifer” means “morning star” and Jesus identifies himself as the morning star (Lucifer), then is Lucifer Jesus? The basic point to note is the context at which a name is used. This varies across languages and cultures.
In making use of the name Lucifer, it is appropriate we make reference to who we are talking about, and this is exactly what the Holy Catholic Church did in the Easter Exultet. She made reference to Christ and NOT the devil.
The angelic being once referred to as Lucifer later became satan through his fall. Put differently, the name Lucifer referred to him before he turned against God. satan is what he became afterward. Naturally, people are going to associate the name Lucifer with satan, although that is not correct. It is unfortunate that the beautiful name Lucifer, which means Morning Star, came to be synonymous with satan, so bad that many people do think of it that way because satan is a deceiver and keeps deceiving people that he is still Lucifer. However, he is not, anymore.
The reason why we are not scandalized with the title “Morning Star” is because we already have it in English language. Whereas, in Latin, the name Lucifer appears to replace the title “morning star” because they mean the same thing. If we are to read the Latin Bible, we would find out that the name Lucifer is used;. That is why we should understand the context with which the deacon at the Vatican chanted the word “Lucifer”, in reference to Christ as the Morning Star. I believe the whole issue is becoming clearer now.
That portion of the Easter Exultet in Latin reads:


This is simply translated in English as:
“May this flame be found still burning
by the MORNING STAR:
the one MORNING STAR who never sets,
Christ your Son,
who, coming back from death’s domain,
has shed his peaceful light on humanity,
and lives and reigns for ever and ever.”
Hence, in that portion, we make reference to Christ as the Morning Star, and NOT the devil. In the Easter Exultet, we sing to God, asking that the candle which is being lit will continue to burn until His Son (Jesus Christ), “The Morning Star” comes to reign for eternity. It uses the same term for Christ that He uses for Himself in Revelation 22:16.
The problem is that the enemies of the Catholic Church have been working tirelessly, day and night to mislead the children of God and paint the Church in an evil way in order to see to its downfall from the onset; as such, St. Peter warns us in 1 Peter 5:8-9: “Be calm but vigilant because the enemy, the devil is prowling around like a roaring lion looking for someone to devour, stand up to him, strong in Faith…” Besides, Christ has promised that the gate of hell will NEVER prevail against his Church (Matt. 16:18). That is our consolation.
May God continue to sustain us in the faith. AMEN!