CAN A PRIEST BREAK THE CONFESSIONAL SEAL? 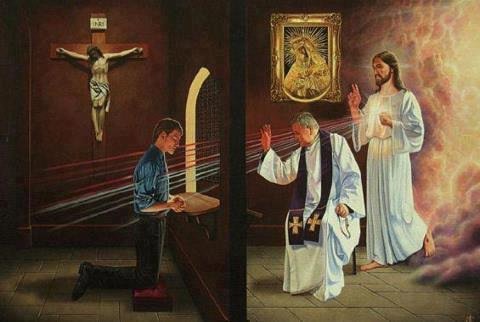 The Confessional is a sacred encounter of the penitent (sinner) with the Holy Spirit, through the instrumentality of a validly ordained Priest. For this reason, the sins confessed are made in secret and cannot be revealed to a third party, because it is believed to be made to God.

In consonance with the discussion at hand, once a penitent (sinner) approaches the priest and begins to confess his sins in confidence to the priest. Any sin confessed at that point remains a secret. Put differently, the sacramental seal is inviolable. The Catechism of the Catholic Church, quoting Canon 983 §1 of the Code of Canon Law (CIC), states, “…It is a CRIME for a confessor IN ANY WAY to betray a penitent by word or in any other manner or FOR ANY REASON” (CCC. #2490, 2511). The same portion of the CCC also adds “The Secret of the Sacrament of Reconciliation is sacred and CANNOT be violated UNDER ANY PRETEXT”

Friends, take note of the words I placed in Capital letters from the above passage:
“CRIME”, “IN ANY WAY”, “FOR ANY REASON”, “CANNOT”, “UNDER ANY PRETEXT”

With these strong words, the Church makes her position clear, with no exception on the matter. Needless to say that in whatsoever reason, whether it is the case of the murder of the Papal Nuncio, Bishop or even the Pope (for any reason, under any pretext), once a sin has been confessed at the confessional, it CANNOT be revealed. Thus, it implies that a priest, therefore, cannot break the confessional seal to save his own life, to protect his good name, to refute a false accusation, to save the life of another, to aid the course of justice (like reporting a crime), or to avert a public calamity. He cannot be forced by law to disclose a person’s confession or be bound by any oath he takes, e.g. as a witness in a court trial. A priest cannot reveal the contents of a confession either directly, by repeating the substance of what has been said, or indirectly, by some sign, suggestion, or action. This makes the Sacrament of Confession less of the Priest and more of the Holy Spirit.

A Decree from the Holy Office (Nov. 18, 1682) mandated that confessors are forbidden, even where there would be no revelation direct or indirect, to make any use of the knowledge obtained in the confession that would “displease” the penitent or reveal his identity.

Now, if there is a delicate situation like the sin of killing the Pope, or bishop, or Papal Nuncio, or any member of my family, the priest may ask the penitent (sinner) for a release from the sacramental seal (permission) to discuss the confession with others. Here, you can see that it is only when the penitent (sinner) gives the priest permission to break the seal that he can do that. If after asking the sinner for permission and he/she declines, the priest cannot break the seal. The priest can also counsel the sinner of the gravity of his/her sin (such as the death of a bishop, for instance), and can ask the sinner to go report himself to the authority in the spirit of charity, for the good of the Church and the world. It is now left for the sinner to do so or not. Even if he/she does not, the priest cannot reveal his/her identity.

Let’s also consider another case, a criminal went for confession and confesses that he killed my brother priest, if I have no idea of what to tell the criminal at that time, I can seek his permission to discuss the matter with a more experienced confessor (priest) who knows how to deal with a difficult case of conscience. If the criminal grants me permission, I must keep the identity of the criminal secret.

Now, what happens if a priest goes ahead to break the confessional seal (secret)? The Catechism of the Catholic Church (CCC #1467), quoting the Code of Canon Law (CIC 1388 §1), states, “A confessor who directly violates the seal of confession incurs an AUTOMATIC EXCOMMUNICATION reserved to the Apostolic See; if he does so only indirectly, he is to be punished in accord with the seriousness of the offence.”

Therefore my dear friends, owing to the seriousness of the punishment attached to those who break the seal, we can clearly see how sacred the sacramental seal of confession is in the eyes of the Church. It cannot be toiled with.

Thank you father for a great explanation God bless you