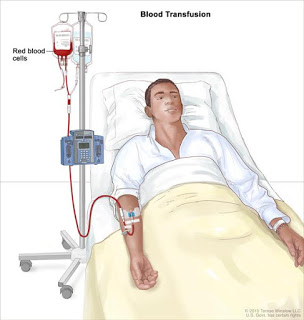 WONDERS WILL ALWAYS PERSIST… JUST ANOTHER QUESTION FROM A FRIEND OF MINE THAT GOT ME “SHAKING MY HEAD”
INBOX QUESTION:
“Hello Chinaka, I just did a blood transfusion for my son who had an accident, last week. Thank God he survived. I almost did not do it because of my friend, a Jehovah’s Witness who persuaded me not to do it. He said that God forbade the consumption of blood in the Old Testament, and even the apostles continued that tradition in the Acts of the Apostles, and that donating blood to someone is tantamount to blood consumption. He made me look as if I’ve committed a great sin by donating blood. Please, I would like to know the stand of the Church and what the Scriptures really have to say on this. Thanks as I expect your response soonest.
RESPONSE:
Thanks be to God for the life of your son, and I equally thank God that you took a firm decision in donating blood for your son against the wish and the false counsel of your friend.
There is nothing wrong, ABSOLUTELY NOTHING wrong with blood transfusion my dear brother. The Bible did not prohibit it. The Jehovah’s Witnesses include in their moral code the Old Testament ritual laws. They believe that ceremonial laws prohibiting the drinking of blood (Gen. 9:3-4; Lev. 17:14) are continued in the New Testament (Acts 15:28-29). They maintain a theological purpose for this prohibition without recognizing the truth about redemption through the Blood of Jesus. Because of their false theology, they erroneously extend the prohibition to blood transfusions. God does NOT forbid the consumption of blood and blood transfusions. In the words of Jesus, “whatever goes into a man from outside cannot defile him…It is only what comes out of him [sins which proceed from the heart] defile a man,” (Mk. 7:18-23).
The prohibition against eating blood found in the Old Testament was a discipline associated with the covenant between God and Noah, and incorporated into the Mosaic Covenant. When Jesus established the New Covenant through His death and resurrection, the disciplines of the Old Covenant became unnecessary. The discipline was maintained for a brief time in the early Church to protect new converts from scandal. When taken in context, we find that the consumption of blood is not forbidden.
The problem with the variations or differenceS in biblical interpretations is often ignorance. The Scripture is meant to be read and interpreted from a standard (magisterium); we don’t just read the Bible and dwell on its literal meaning alone. The “sitz im leben” (life setting/situation) must be respected. Now, let us look at the life-setting in which blood consumption was prohibited in the scripture. The key is to look at the context of the passage in Acts of the Apostles.
In the early Church, the Christians were made up of Jews (converts from Judaism) and Hellenists (Jews who were mixed up with the Greek pagan culture) they were often regarded as Gentiles. The mention of not eating blood in Acts 15:20, 29 was a pastoral provision suggested by James to keep the Jewish Christians from being scandalized by the conduct of Gentile Christians. The converted Jews were still maintaining the conducts of the Mosaic Law, while the Gentile Christians did not. However, these pastoral provisions were only temporary. Hence, in what is known as the Council of Jerusalem, it was the question of what to do about the conflict of practice between almost purely Gentile churches such as those begun by Paul and the almost purely Jewish churches in Palestine. The Christians in Jerusalem and probably in other churches in Palestine had been observing most of the regulations of the Mosaic Law up to the time recorded in Acts 15. They observed the Sabbath and most or all of the other Jewish holy days. They also continued a kosher or nearly kosher food practice. They were still circumcising their male children. Paul did not impose these practices on the Gentile Christians simply because Christianity does NOT require them. In fact, Paul speaks very strongly against commanding such things in the books of Colossians and Galatians.
Hence, animal blood was prudently prohibited at that time in the Church out of deference to the Jewish converts who found it offensive. Keep in mind, Jews who called themselves Christians still associated with those Jews who were not Christians. Nevertheless, Paul says in Romans 14:13-15 that no food is unclean, but that Christians must not scandalize each other with what they eat. To avoid such scandal, certain foods were temporarily forbidden. Furthermore, food that contained blood was associated with pagan rituals. To avoid an association of Christianity with pagan rituals, the temporary discipline was maintained. In short, the purpose of the discipline was not theological—as in the Old Testament—but social. When the danger of scandal to Christianity ceased, this temporary discipline was abolished.
Hence, it is not sinful for a Christian to eat blood meal.
We have some cultures which appreciate blood meal and it forms basically the major part of their food. For example, in Philippines, blood meal is appreciated and nothing is wrong with it. Having established this, it follows then, that, BLOOD TRANSFUSION is NOT sinful, inasmuch as the purpose is to save lives.
I shaked my head seriously at the sight of this question, because some people tend to use the scripture to misinterpret and jettison the value of life. Now, they are saying we should not save lives by blood transfusion due to the case that blood consumption was temporarily forbidden in Jerusalem at that epoch. I hope another set of people would not just rise someday and biblically condemn going to the hospital to receive treatment…lol.
Dear sir, my question to your Jehovah’s witness friend is: What does the law require, to save life or to terminate it?
Please, do not allow yourself to be led astray by the false doctrines of your friend. Be guided accordingly.
Shalom!