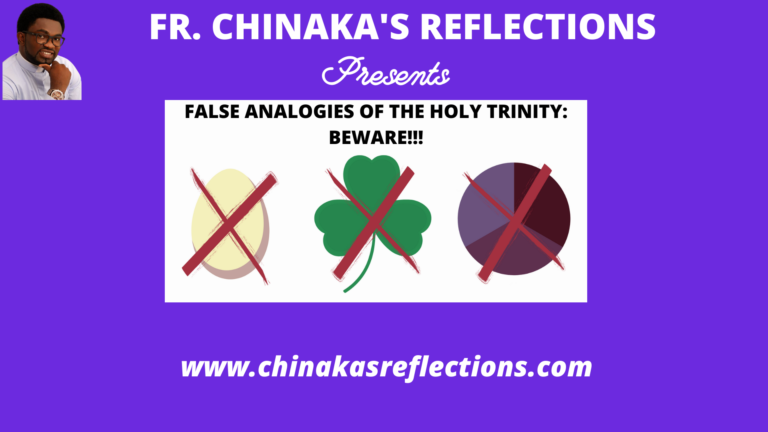 Apparently, every year on “Trinity Sunday” (Solemnity of the Most Holy Trinity), many preachers tend to use analogies to explain the mystery of the Most Holy Trinity at Mass, which obviously fall short of the mystery and end up falling into heresies. When this happens, the laity become ‘malnourished’ in the faith with a poor understanding of the central mystery of the faith. As the Catechism of the Catholic Church #234 says: “The mystery of the Most Holy Trinity is the central mystery of Christian faith and life. It is the mystery of God in himself. It is therefore the source of all the other mysteries of faith, the light that enlightens them. It is the most fundamental and essential teaching in the “hierarchy of the truths of faith.” Thus, this mystery is the most fundamental. If we get it wrong, then everything else gets obscured or perverted. In summarizing the mystery of the Most Holy Trinity, the Catechism of the Catholic Church (CCC) puts it this way: “We do not confess three Gods but one God in three persons, the consubstantial Trinity. The Divine Persons do not share the one divinity among themselves but each of them is God whole and entire (…) In the words of the Fourth Lateran Council (1215), Each of the persons is that supreme reality, viz., the divine substance, essence or nature” (cf. CCC #253). These three persons – Father, Son, and Holy Spirit – exist together in complete unity, with no separation, as one divine being. If one of the persons were not there, then we would not have God.

Resting on this backdrop, therefore, this article sets to expose the major heresies which many baptized fall into when attempting to explain the Holy Trinity, in order that the faithful might identify them as heresies and avoid their application, henceforth.

Heresy is an emotionally loaded term that is often misused. It is not the same thing as incredulity, schism, apostasy, or other sins against the faith. The Catechism of the Catholic Church states, “Incredulity is the neglect of revealed truth or the willful refusal to assent to it. Heresy is the obstinate post-baptismal denial of some truth which must be believed with divine and Catholic faith, or it is likewise an obstinate doubt concerning the same; apostasy is the total repudiation of the Christian faith; schism is the refusal of submission to the Roman Pontiff or of communion with the members of the Church subject to him” (CCC #2089). Hence, to commit heresy, one must refuse to be corrected. A person who is ready to be corrected or who is unaware that what he has been saying is against Church teaching is not a heretic. Also, a person must be baptized to commit a heresy. Let us consider the following:

Modalism heresy teaches that the Trinity is not three distinct persons, but just different modes that God reveals himself to human beings. So under modalism, God acts as the Father in the Old Testament, the Son in the Gospels, and the Spirit in Acts and the Epistles. Modalism teaches that one God just changes forms or modes over the course of scripture. Modalism is a heresy because it denies the distinction of God. God does not just change forms but exists as Three Persons in unity. In Scripture we see explicit Trinitarian references, especially at Jesus’ baptism where the Father speaks, the Spirit descends, and the Son is in the water. All three persons exist at the same moment in history. Modalism denies the distinction of the Persons in the Trinity.

Arianism is named after the heretic Arius. Arius was condemned by the Council of Nicea in 325, AD. He taught that the Son was at one point created by God the Father. His motto was that “There was a time when the Son did not exist”. Jesus then becomes a created being and thus lesser than the Father. Arianism clearly denies the deity of the three persons. Under Arianism Jesus is less than fully God. Unfortunately, Arianism is still around and can found within the Jehovah’s Witnesses teachings. In the Scripture we see “in Him (Jesus), the fullness of God was pleased to dwell” (Col 1:9). Jesus isn’t a demigod or partially god. Jesus is fully God. Arianism denies the deity of each person in the Trinity.

Tritheism denies the unity of the Godhead by saying there are just three different gods. Tritheism denies that there is only one God (that is, Father, Son, and Holy Spirit, united as One and having the same divine substance).

Having analyzed the major heresies surrounding the Trinity, it is pertinent at this point to illustrate with examples, these analogies.

FALSE ANALOGIES OF THE TRINITY

How the analogy goes: “The Trinity is Like a man who is a father, husband, and son. Although he is one he has different roles to different people.” The problem with this analogy is that it denies the distinction of Persons in the Godhead. The analogy breaks down because I can simultaneously be a father, husband, and son to any one person. In reality, I change my role depending on who I am interacting with. As a result, this analogy falls under the modalism heresy as explained above. Therefore, the Trinity should not be represented with this analogy.

How the analogy goes: “The Trinity is like an egg. In one egg you have three distinct parts, the albumen, the yolk, and the shell, composing one full egg.”

This analogy, however, interesting and convincing as it may appear, denies the unity of the God-head. The problem with this analogy is that the yolk is of a very different substance from the shell and the albumen. Besides, if we remove the shell of a boiled egg, it still remains an egg, unlike the Trinity where if one member were missing, there would be no Godhead. While an egg has three distinct parts, they can be separated from the other, unlike the Trinity. This analogy actually teaches the heresy of Tritheism as analyzed above; thus, the Trinity should not be represented with this analogy.

How the analogy goes: “The Trinity is like water. Water has three states: solid, liquid, and gas. Although if the water changes its form, it is still H2O. Just as water changes its form so too is the Trinity.” This analogy denies the distinction of the God-head. With a rudimentary knowledge of Science, I can say that the problem with this analogy is that no one molecule of H2O can actually exist as solid, liquid, and gas at the same time. As a result, the water molecule must change forms. A single molecule cannot simultaneously exist in three different states. This analogy actually teaches the heresy of modalism; thus, the Trinity should not be represented with this analogy.

Unfortunately, NO ANALOGY IS PERFECT. The Holy Trinity is a mystery that cannot be fully comprehended. The Trinity is not a contradiction, but a paradox. God is much bigger and much greater than we can understand and make attempts to illustrate, and we should be okay with that. Even if these analogies have the best of intentions, but God cannot be described in a way we can fully comprehend or rationalize. His Being is somewhat of a mystery to us. When we tend to make an analogy about the Trinity we are forced to diminish one of the Trinitarian truths in order to make the analogy work. Often, these analogies explicitly teach heresy.

Therefore, the Church believes, then, that only One God exists but this God exists as a unity of Three Persons: A Trinity (FATHER, SON, AND HOLY SPIRIT). God does NOT exist as three separate beings. Instead, each Person is co-equal, co-powerful, and co-eternal with the other two Persons. While each person is distinct, they are never separate from one another.