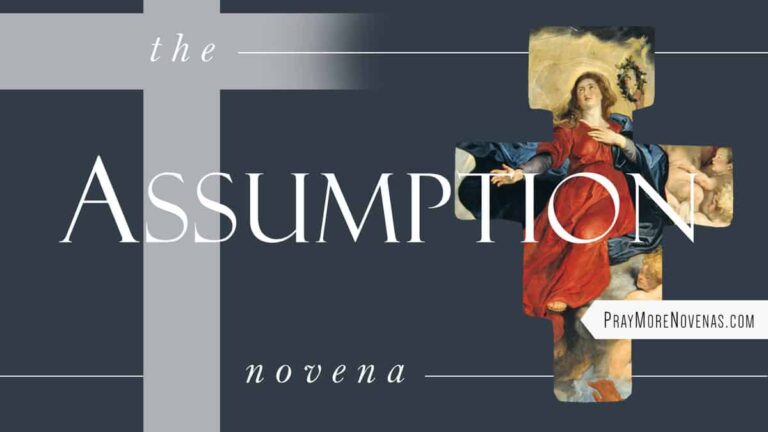 OPENING PRAYER TO OUR LADY OF THE ASSUMPTION

O Most Holy Mary, as we celebrate your Assumption in body and soul to the glory of Heaven, we implore you to help us to live with faith and hope in this world, seeking always and in all things the Kingdom of God.

O Lady assumed to Heaven, help us to open ourselves to the presence and action of the Holy Spirit, the Spirit that creates and renews, capable of transforming our hearts.

O Lady of the Assumption, enlighten our minds about the destiny that awaits us – the eternal joy in the heavenly homeland – of the dignity of each one of us and the nobility of our bodies and of our souls, who may one day be with you in the glory of Heaven.

O Blessed Virgin Mary, raised to Heaven, show yourself to us all as Mother of faith, hope, and love!

(Your body is holy and glorious)

“In their sermons and speeches on the feast day of the Assumption of the Mother of God, the holy fathers and the great doctors of the church were speaking of something that the faithful already knew and accepted: all they did was to bring it out into the open, to explain its meaning and substance in other terms. Above all, they made it most clear that this feast commemorated not merely the fact that the blessed Virgin Mary did not experience bodily decay, but also her triumph over death and her heavenly glory, following the example of her only Son, Jesus Christ.

St Germanus of Constantinople considered that the preservation from decay of the body of the Mother of God, the Virgin Mary, and its elevation to heaven as being not only appropriate to her Motherhood but also to the peculiar sanctity of its virgin state: “It is written, that you appear in beauty, and your virginal body is altogether holy, altogether chaste, altogether the dwelling-place of God; from which it follows that it is not in its nature to decay into dust, but that it is transformed, being human, into a glorious and incorruptible life, the same body, living and glorious, unharmed, sharing in perfect life.”

Another very ancient author asserts: “Being the most glorious Mother of Christ our Saviour and our God, the giver of life and immortality, she is given life by him and shares bodily incorruptibility for all eternity with him who raised her from the grave and drew her up to him in a way that only he can understand.”

All that the holy fathers say refers ultimately to Scripture as a foundation, which gives us the vivid image of the great Mother of God as being closely attached to her divine Son and always sharing his lot.

It is important to remember that from the second century onwards the holy fathers have been talking of the Virgin Mary as the new Eve for the new Adam: not equal to him, of course, but closely joined with him in the battle against the enemy, which ended in the triumph over sin and death that had been promised even in Paradise. The glorious resurrection of Christ is essential to this victory and its final prize, but the blessed Virgin’s share in that fight must also have ended in the glorification of her body. For as the Apostle says: “When this mortal nature has put on immortality, then the scripture will be fulfilled that says “Death is swallowed up in victory”.”

So then, the great Mother of God, so mysteriously united to Jesus Christ from all eternity by the same decree of predestination, immaculately conceived, an intact virgin throughout her divine motherhood, a noble associate of our Redeemer as he defeated sin and its consequences, received, as it were, the final crowning privilege of being preserved from the corruption of the grave and, following her Son in his victory over death, was brought, body and soul, to the highest glory of heaven, to shine as Queen at the right hand of that same Son, the immortal King of Ages.” (~Culled from the Divine Office – Office of the Readings for Assumption). O glorious Mother, as you rose into the air, clouds, and inner atmospheres, Our Lord Jesus Christ extended His holy hands to receive you. Your solemn “Yes” was transformed into a glorious flight in the arms of the Father who welcomed her and crowned her Queen of the universe. O Mother of our King; you are blessed among women, the full of grace, the Saint of saints, the beloved of God, the Immaculate, the most beautiful of all creatures, the Virgin Queen, girded with the crown of twelve stars, clothed with the sun and with the moon under your feet, and the most humble of creatures. before these glorious attributes of yours, the voice of prayer cannot remain silent, nor dies the strain of our petitions for your intercessions. O Queen of heaven and earth, turn your compassionate gaze to us. Before your majesty on this last day of our novena in honour of your glorious assumption, I present the following intentions for your maternal care (state your requests).

Recite 3 Hail Marys for the favour you seek to obtain.
O Queen assumed into heaven, pray for us who have recourse to thee.

LITANY OF OUR LADY OF ASSUMPTION (SHORT INVOCATIONS) 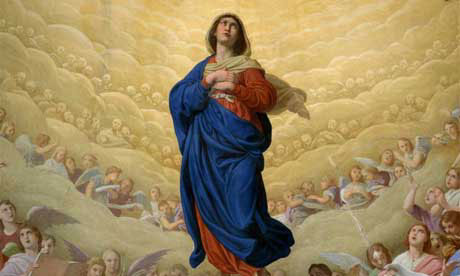 O sovereign queen of the Angels, we well know that as miserable sinners, we were not worthy to possess you in this vale of tears, and we know that your greatness does not make you forget our misery. In the midst of so much glory, your compassion, far from diminishing, increases more and more for us. From the height of that throne where you reign over all the angels and saints, turn your merciful gaze upon us; see how many storms and a thousand dangers encircle us in these turbulent times. Our queen and mother, obtain for us the increase in faith, confidence, and holy perseverance in friendship with God, so that we can, one day, go kiss your feet and unite our voices with those of the heavenly spirits, to praise and sing your glories eternally in heaven – Ave Maria! Amen. 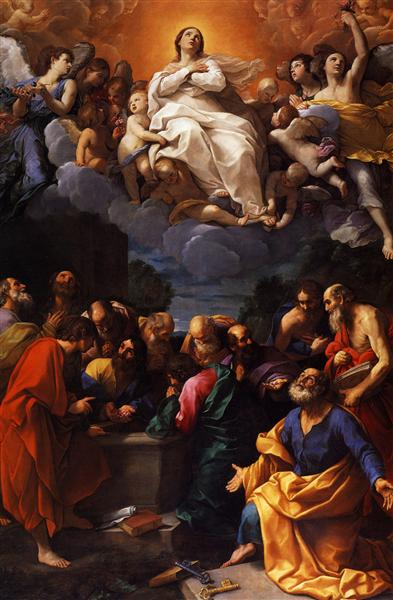 Triumph all ye cherubim!
Sing with us ye seraphim!
Heaven and Earth, resound the hymn!

Our life, our sweetness here below,
Oh Maria,
Our hope in sorrow and in woe,
Oh Maria,

Triumph all ye cherubim,
Sing with us ye seraphim,
Heaven and Earth resound the Hymn!

Through the intercession of Our Lady assumed into heaven, may the Lord bless + us, protect us from all evil and bring us to everlasting life. Amen.

O Blessed Virgin Mary, raised to Heaven, show yourself to us all as Mother of faith, hope, and love!

Sweet Mother of God Assumed into heaven, continue to pray for us. Amen