PRIESTLY CELIBACY: WHY THEY DO NOT MARRY & DIFFERENCES IN RITES 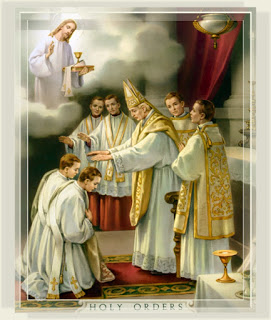 PRIESTLY CELIBACY: WHY THEY DO NOT MARRY & DIFFERENCES IN RITES

INBOX QUESTION:
Hello Chinaka, I just find it hard to comprehend the fact that priests do not get married, after all, God said ‘Increase and multiply, fill the earth..’ why would the Catholic Church go against this divine command? I look forward to your response. Thanks”.

RESPONSE:
I have received numerous questions of this kind in times past and even till date. Let me quickly explain the reality. In the Catholic Church, we have PRIESTS from the EASTERN RITE and the LATIN RITE etc. I actually wrote a post on the Catholic Rites recently on this page, I believe that would serve a better explanation to the rites since I won’t dwell on that now, although some explanations will set in.
The Latin Rite is the largest popular Church within the Catholic Church where majority of us belong (Roman Catholic Church). Priests from the EASTERN RITE may or may not marry; put differently, marriage is optional for them. Hence, the celibates of the Eastern rite (that is, those who are not married) have the potential of becoming a Bishop. Put differently, the Bishops of the Eastern rite are celibates (they do not marry). However, for those who desire marriage, they do so before their priestly ordination.

On the other hand, Priests from the LATIN RITE do not marry. Majority of us Catholics belong to this rite, and we have come to understand that priests general do not marry, because of the influence we get here.

The reasons Latin rite priests can’t marry is both THEOLIGICAL and CANONICAL: 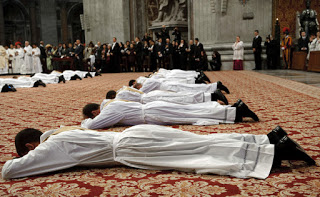 THEOLOGICALLY:
Theologically, it is pointed out that priests serve in the place of Christ and therefore, their ministry specially configures them to Christ. As is clear from Scripture, Christ was not married (except in a mystical sense, to the Church). By remaining celibate and devoting themselves to the service of the Church, priests more closely model, configure themselves to, and consecrate themselves to Christ.
As Christ himself makes clear in Matt. 19:12 “and some choose not to marry for the sake of the Kingdom of Heaven. Let anyone accept this who can.” He also makes it clear that none of us will be married in heaven (Mt 22:23–30). By remaining unmarried in this life, priests are more closely configured to the final eschatological state that will be all of ours. Hence, I dare to say that the Celibacy of Priests is just a foretaste of the life to come.
Paul makes it very clear that remaining single allows one’s attention to be undivided in serving the Lord (1 Cor 7:32–35). He recommends celibacy to all (1 Cor 7:7) but especially to ministers, who as soldiers of Christ he urges to abstain from “civilian affairs” (2 Tm 2:3-4). 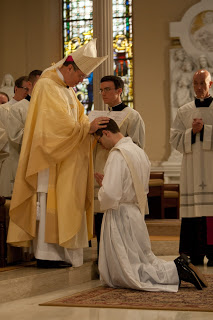 CANONICALLY:
Canonically, priests cannot marry for a number of reasons:
First, priests who belong to religious orders take vows of Chastity.
Secondly, while diocesan priests do not take vows, they do make a promise of celibacy.
Also, the Church has established impediments that block the validity of marriages attempted by those who have been ordained. Canon 1087 states: “Persons who are in holy orders invalidly attempt marriage.” This impediment remains as long as the priest has not been dispensed from it, even if he were to attempt a civil marriage, even if he left the Church and joined a non-Catholic sect, and even if he apostatized from the Christian faith altogether. He cannot be validly married after ordination unless he receives a dispensation from the Holy See (CIC 1078 §2, 1).

BUT ONE MAY ASK: “AFTER ALL IN THE PAST, CATHOLIC PRIESTS WERE MARRIED, WHY IS THE CASE DIFFERENT NOW?”
It is true, however, that during the Patristic age, Clerical marriage (that is, priestly marriage) was permitted, but this must be done before ordination (because once the sacrament is conferred there can’t be marriage…) This was the era before the separation of the Eastern rite catholic from the Latin (Roman) rite. However, the idea of marriage does not include Religious, because from the onset religious were not priests, they were just monks and nuns who follow Christ more closely by professing three vows among which is the vow of Chastity. After the “separation” of the Eastern and Latin Churches/rites in 1054, the idea of marriage continued in the Eastern rite as it had been observed in the undivided Church.
For the Eastern rite, Celibacy is not compulsory (it is optional) but bishops are elected only from celibates. In this vein, marriage is allowed for deacons and priests but only before ordination. The sacrament of marriage cannot follow the sacrament of priesthood.
However, the Latin (Roman) rite (which majority of us belong) introduced in the 12th century the “discipline of celibacy” This was imposed definitively and universally in the Latin Church when the First and Second Lateran Councils of 1123 and 1139 respectively declared clerical marriages not only illicit, but invalid. (That was the end of marriage in the Latin rite).
MORE ABOUT EASTERN RITES
The separation of the Eastern rites from our Latin rite does not make them less “Catholic” neither can we see them as protestants… We are all One and the same.
The Eastern Catholic Churches are autonomous, self-governing particular churches in communion with the Pope . Together with the Latin Church , they make up the entire Catholic Church. They preserve many centuries- old Eastern liturgical, devotional, and theological traditions, which are in most cases shared with the various other Eastern Christian churches with which they were once associated, such as the Eastern Orthodox Church and Oriental Orthodox Church. Historically, Eastern Catholic Churches were located in Eastern Europe , the Middle East, North Africa and India. Due to migration they are now also in Western Europe, America and Oceania, where eparchies have been established alongside the Latin dioceses.
Above all, we must realize that priestly celibacy is a discipline, not a doctrine, and so there is room for diversity on the issue according to the customs of the respective Rites. In other words, a new Pope may rise tomorrow and re-introduce marriage for the Latin rite priests (our priests), but this will not include Religious Priests because they usually take the vow of Chastity before priestly ordination which prevents them from marriage (remember that they were not married from the onset).
If celibacy were a doctrine, all rites would have to conform to the judgment of the Holy See on the matter because doctrines are true for everybody. But celibacy is a discipline (a practice that is legislated by proper Ecclesial authority) that has been deemed to be spiritually beneficial. In the Latin rite, this spiritual discipline ordinarily is required of all men who seek priestly ordination. In the Eastern rites, celibacy is practiced by the monks and by some secular priests, but it is not required of all men who seek ordination. Out of respect for the longstanding customs of the Eastern-rite churches, the Vatican allows the Eastern churches in communion with the Holy See to maintain their own properly constituted discipline on this issue.
I hope this is well understood…

(SEE ALSO: THE ROMAN CATHOLIC CHURCH AND THE OTHER CATHOLICS: ARE YOU AWARE OF THIS?)