4TH SUNDAY OF ADVENT, YEAR A. REFLECTION: “JOSEPH, OUR MODEL OF PROMPT OBEDIENCE AS WE AWAIT THE COMING OF CHRIST” 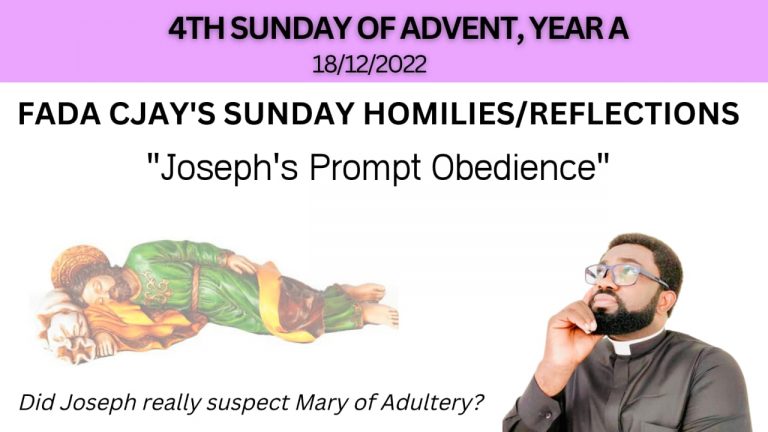 REFLECTION: “JOSEPH, OUR MODEL OF PROMPT OBEDIENCE AS WE AWAIT THE COMING OF CHRIST”

Dear friends in Christ, the period from 17th – 24th of December (2nd part of advent) brings a closer sentiment of Christmas in the life of the Church. They are known as the 8 days before Christmas. In these last eight days before Christmas, the relationship between the readings change. Now the gospel brings us to our celebration of Christmas. The gospels are taken from the infancy narratives of Matthew and Luke. Each of these days, the first reading is taken from the Hebrew Scripture and chosen to match the gospel. In many cases, we can imagine Matthew or Luke having the first reading open on their desks while they wrote the gospel. The sense of anticipation and fulfillment builds as we read the story of the preparation for Jesus’ first coming into this world for us.

The coming of Christ, as understood from the Scripture, was a result of His obedience to His Father’s Will. This is well explained by Paul in his letter to the Philippians 2:6-11, as an example for the Philippian community to emulate (Though Jesus was God, He became humble, and learned to obey through suffering and death on the Cross). In consonance, the parents of Jesus (Joseph and Mary) were obedient to the will of God in order to realize the coming of the Saviour. Today’s Gospel reveals something very significant (the virtue of obedience) in the life of Joseph, which we shall examine in this reflection.

Today the 18th of December, the readings focus on the story of the Virgin Birth. In the First Reading, God gives a sign through the prophet Isaiah to King Ahaz of Judah: “Behold, a virgin shall conceive and bear a son, and his name shall be called Emmanuel” (Isaiah 7:14) Matthew considers this one of the most descriptive and definite prophecies foretelling that the future Messianic king, the Christ, would be born as a descendant of David. What was the context of this? The Kingdom of Israel was undivided under David and Solomon’s reign (until Solomon’s death in the late eighth century BC) into a northern kingdom, Israel, and a southern kingdom, Judah. Assyria, the dominant power in the region controlled Israel and Syria, among other lands. These two liege states were planning to rebel against Assyria.  Their kings pressured Judah’s King Ahaz, the eleventh Jewish king of Judah in ten years (735 to 715 BC), to join them. [See 2 Kg 16 ff and 2 Chronicles 28 for Ahaz’s history.]  When he refused, they began to plot to overthrow him by attacking Judah. Instead of trusting in God, Ahaz planned to ask for help in holding his throne from his overlord, the pagan Assyrian king, a request which later led to the overthrow of the kingdom of Judah. Confident that his God, Yahweh, would protect Judah and its king, the prophet Isaiah told Ahaz to have Faith in Yahweh and not to ally himself with Assyria. But Ahaz wouldn’t listen; he was determined to go ahead with his alliance.  (In order to appease the Assyrians, Ahaz had replaced the altar in the Temple with an Assyrian altar and had sacrificed his firstborn son to the Assyrian god Moloch). Isaiah told Ahaz that the Lord wanted him to ask God for a sign of the truth of what Isaiah was saying.   Ahaz had already made up his mind to rely on Assyria instead, so he refused to ask for a sign, using the excuse that it would be “tempting God” to do so. In frustration, Isaiah announced God’s sign anyway, the birth of a Son from a Virgin, whose very name, “Emmanuel” (“God is with us”), would assure everyone that God was really with His people.

As a follow-up, Matthew understands the passage from Isaiah as promising the birth of an ideal descendant of David, the Messiah. Despite Matthew’s citation from Isaiah, Isaiah probably wasn’t consciously prophesying Jesus’ birth in Is. 7:10-14, and certainly was not predicting that birth exclusively.  The Lord God, through Isaiah, was giving King Ahaz a sign which had to be recognized instantly, not 700 years later in Jesus. Besides, the Hebrew word “almah” which we translate as “virgin,” meant only a woman who had not yet delivered a baby. Hence, the almah Isaiah mentions probably would be Ahaz’s wife, and “the Emmanuel” would be their soon-to-be-born son Hezekiah. The promised son of Ahaz would be faithful and obedient to Yahweh and would institute a series of religious reforms that would undo many of Ahaz’s accommodations to Assyrian religious practices. Hence, many modern Bible scholars do not believe that the immediate identities of Isaiah’s “virgin” and “Emmanuel” were Mary and Jesus. The fact that prophecies in line with the work of the Holy Spirit can have several fulfilments often centuries apart is axiomatic in the Church, which relies on the Holy Spirit as her Guardian against error, as Jesus promised would be the case. The Letter to the Hebrews provides multiple instances of this kind of reading of Biblical texts. Matthew’s citation, which identifies the “Virgin” as Mary and “Emmanuel” as Jesus, provides what is probably the FINAL FULFILMENT of the prophecy.

The Second Reading from St. Paul’s letter to the Romans also emphasizes that Jesus was a descendant of David and thus the Messiah “descended from David according to the flesh” (Rom. 1: 3).]  At the beginning of this letter, Paul briefly summarizes the Gospel, the core of Christian faith, as including two things.  One is that that the only-begotten Son of God, who become Incarnate as Jesus, was a descendant of the line of David; the second is that Jesus was revealed and established by the Father as “Son of God” in power by his Resurrection from the dead. Jesus’ birth is significant because of his death and Resurrection for our salvation. What was the context of this Pauline letter? The Christian congregation in Rome was small, not yet persecuted, and still meeting in someone’s home. These were the first-generation converts – some Jewish, some Gentile.  Paul was introducing himself to the Romans in this letter, and he was establishing his authority as God’s Apostle. That was necessary because the Church in Rome did not know Paul personally, having heard only that he was a former persecutor turned Apostle.  In the first sentence, Paul describes himself as “set apart to proclaim the Gospel …,” and later, “favoured with Apostleship.” The rest of the introduction is a summary of the Gospel and of the Divine Plan Paul serves. Paul sees how Jesus’ coming and his own mission to non-Jews are prefigured in the Hebrew Scriptures.  Paul understands that the virtue of obedience was necessary for the mission brought about by Christ; he stresses: “…Through him we have received the grace of apostleship, to bring about the OBEDIENCE OF FAITH, for the sake of his name, among all the Gentiles, among whom are you also, who are called to belong to Jesus Christ…”

In the Gospel Reading, Matthew brings Joseph to the forefront, because Jesus becomes part of David’s lineage through Joseph (1:1-17).  Luke tells us of Mary’s obedience (Luke 1:38) and Matthew of Joseph’s obedience.  Luke tells the story of the angel’s appearance to Mary (Luke 1:26-38), but Matthew tells us only that the child was from the Holy Spirit.  But why does the Church couple Ahaz with Joseph in today’s readings?  Because of the stark contrast between the two men, each faced a difficult situation.  One of them, Ahaz, relied on his own wits and schemes.  Joseph relied on God alone and trusted in Him absolutely. One of them sacrificed his own son to appease others and showed no mercy.  The other spent his life protecting his son.  And so we see Joseph, in sharp contrast to Ahaz in the background, as the just and righteous man that he is.

Joseph was able to overcome the crisis in the family due to his virtue of obedience to God. Today, many persons erroneously think and teach that Joseph suspected Mary of adultery, and as a result of this, he thought of abandoning her. First, the Bible does not teach this nor even use the word divorce. Over the years, three theories had been adopted to explain this biblical misunderstanding. We have the:

In all of these, we ask ourselves, why was the Obedience of Joseph very important? In this first instance, the angel commands Joseph to take Mary as his wife.   In Mt 2:13, the angel will tell Joseph to take the mother and child to Egypt to escape Herod’s wrath.  In Mt  2:19, the angel will, at the death of Herod, tell Joseph to return to Israel.  The angel begins by saying, “Joseph, son of David,” alerting us to Joseph’s lineage.  It is through Joseph that Jesus will be of the house and lineage of David.  Mary’s role is to bear a son, and Joseph’s role is to name him.  By naming him, Joseph makes Jesus his son and brings him into the house of David. After each of the three angelic apparitions in his dreams, Joseph obeys the angel’s commands without question or pause.  His hallmark is obedience—prompt, simple, and unspectacular obedience.  And in this sense, Joseph prefigures the Gospel of Matthew’s understanding of righteousness:  to be righteous is simply to obey the Word of God. Joseph’s obedience allows Jesus to be adopted as a true Son of David; it is Mary’s role that allows Jesus to be born “Son of God.”  In the end, Joseph obediently took Mary as his wife, in spite of his fears, and he claimed her Son as his own by naming him. In spite of his earlier decision to divorce this woman quietly, Joseph nurtured, protected, watched over, and loved both Mary and her Child which was a result of his prompt obedience to God.

Dear friends in Christ, like Joseph, we need to trust in God, listen to Him (obey) and be faithful.  We are here in this Church, a week before Christmas, because, like Joseph, we are faithful, and we trust in God, His power, and His mercy.  Although we may face financial problems, job insecurity, family problems, and health concerns let us try to be trusting and faithful like St. Joseph.   Instead of relying on our own schemes to get us through life, let us trust in God and be strengthened by talking to Him in fervent prayer and by listening to Him speaking through the Bible. Let us remain faithful and prayerful, imitating Joseph and Mary, the humblest of the humble, the kindliest of the kindly, and the greatest-ever believers in God’s goodness and mercy, as we welcome Jesus into our hearts and lives this Christmas.