22ND SUNDAY OF THE YEAR: “THE REWARD FOR HUMILITY” 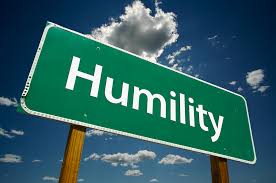 In the field of Agricultural Science, we came to understand the different types of soil. Among the soil categories, loamy soil is said to be the best soil that supports the growth of plants, because of it’s rich humus content. Humus is the dark organic matter that forms in the soil when plant or animal matter decays. Humus contains many useful nutrients for healthy soil, nitrogen being the most important of all. A soil which contains humus is known to support the lives of plants and other organisms in a more increasing amount. Humus enables the soil to submit itself to the effect of water and other external conditions and above all, the sunlight which enables photosynthesis in green plants necessary for growth.

In consonance, it is pertinent to note that the concept of humility springs from the idea of humus. Culled from the Latin root “humilitas”, a noun related to the adjective “humilis”, which may be translated as “humble”, but also as “grounded”, or “from the earth”, since “humus“, has to do with earth; little wonder humility is used to describe one who is said to be “down to earth”. In the light of this, humility can be understood as the submission to the influence of the Holy Spirit (just as humus submits the soil to the sunlight and water enabling photosynthesis – growth of plant), which enables spiritual growth, and also recognizing God’s gifts and human dignity in others and not esteeming oneself above others. Put differently, it is a quality by which a person considering his own defects has a humble opinion of himself and willingly submits himself to God and to others for God’s sake.

Dear friends, today’s readings bring to our doorsteps, “the virtue of humility and its reward”. The readings also warn us against all forms of pride and self-glorification. They present humility not only as a virtue but also as a means of availing ourselves to the poor, the needy, the disadvantaged and the marginalized people in the society. In the First Reading from the book of Sirach/Ecclesiasticus (3:17-18,20,28-29), we hear the golden words of the sage. He says: “My child, conduct your affairs with humility and you will be loved more than a giver of gifts. Humble yourself the more, the greater you are, and you will find favour with God.” Sirach is considered part of the Wisdom Literature; it was written by a Jewish scribe who lived in Jerusalem in the early third century B.C.  His name was Jesus, son of Eleazar, son of Sirach.  He is often called “Ben Sira.” Sirach was a sage who lived in Jerusalem; he was thoroughly imbued with love for the wisdom tradition, and also for the law, priesthood, Temple, and divine worship. The book contains numerous well-crafted maxims, grouped by affinity, and dealing with a variety of subjects such as the individual, the family, and the community in their relations with one another and with God. The part which treats humility is what we read today at mass. Hence, the greater we become, the humbler we should be in order to find favour and be at peace with God.

The Gospel Reading (Luke 14:1, 7-14) is not saying anything different; rather it drives home a more practical dimension of humility. Jesus gives his host a lesson on humility. He explains the practical benefits of humility, connecting it with the common wisdom about dining etiquette. Jesus advises the guests to go to the lowest place instead of seeking places of honour, so that the host may give them the place they really deserve. Jesus’ words concerning the seating of guests at a wedding banquet should prompt us to honour those whom others ignore because, if we are generous and just in our dealings with those in need, we can be confident of the Lord’s blessings.

Dear friends in Christ, just as Jesus challenges his fellow guests, so he challenges us. He warns us that those who will be saved will not be people like the Pharisees. The deeper message of this parable is that if we exalt ourselves, we are going to face embarrassment before the judgment seat of God, the Host who has invited us to the banquet of life. We need to practice humility in personal and social life. Humility is grounded in a psychological awareness that everything I have is a gift from God, and, therefore, I have no reason to boast. I must not use these God-given gifts to elevate myself above others. It is the quality by which a person considering his own defects has a humble opinion of himself and willingly submits himself to God and to others for God’s sake.

We must understand that humility is not timidity or acting foolishly, and no man can boast of attaining full humility, otherwise, it would be understood as being proud of his humility. Humility is a gift. We need to ask God to make us humble. But, asking for humility is not enough; we need to do acts of humility. In order to love, we need to be humble. Above all, let us remember that exhibiting this virtue of humility goes with a reward, just as pride equally has its reward. As stated earlier, the deeper message of this parable is that if we exalt ourselves, we are going to face embarrassment before the judgment seat of God, the Host who has invited us to the banquet of life. And Christ added: “For everyone who exalts himself will be humbled, but the one who humbles himself will be exalted.

Above all, I leave you with the words of St. Augustine: “Humility is the foundation of all the other virtues hence, in the soul in which this virtue does not exist; there cannot be any other virtue except in mere appearance.” Let us ask the good Lord to instil in us this great virtue of humility by earnestly praying for it, and at the end, we shall, like the Psalmist of today (Ps. 68:4-56-7;10-11), rejoice and exult before God; Sing to God, chant praises to his name and exclaim “God, in your goodness, you have made a home for the poor”.