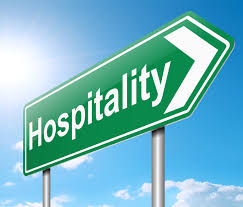 The term “hospitality” etymologically springs from the Latin “hospes”, meaning “host”, “guest”, or “stranger”. Put differently, “hospes” is formed from “hostis”, which means “stranger” or “enemy”. Consequently, hospitality can be understood as the relationship between a guest and a host, wherein the host receives the guest with goodwill, including the reception and entertainment of guests, visitors, or strangers. Hospitality is regarded by most nations of the ancient world as one of the chief virtues. The relationship between host and guest was sacred. Of course, this is still
true today in most Middle Eastern, South American, Native American, African and Asian cultures. I’ve had various experiences of the Biblical practice of hospitality. I vividly recall the experiences I had during a 6-week Apostolic Work in Onitsha Archdiocese and Ilorin Diocese around 2010 and 2011 respectively. The experiences I had were more powerful than any sermon or teaching I’d had in years! I felt loved, honoured, special, valued, welcomed, and a part of their family; such that when it was time to terminate my program, they felt I should remain with them and not leave. The real practice of hospitality makes people feel they belong, special, important, and warmly welcomed into your life – not just your home! It’s receiving strangers like they are family and communicating through your words and actions that they are well worth your time and effort. In fact, hospitality has an intrinsic link with charity, such that without charity, it ceases to be hospitality.

The sense of hospitality I received (as stated above) is not disconnected from the message of today’s readings. I have come to recognize that the way we treat others is the way we treat God. little wonder the author of the Letter to the Hebrews says: “Let brotherly love continue. Do not neglect to show hospitality to strangers, for thereby some have entertained angels unawares.” (Hebrew 13:1-2). This is exactly what we see in the First reading (Gen. 18:1-10A). It was because of his persisting faith that Abraham in his hospitality was able to perceive the presence of God in the three strange men who suddenly appeared in his life. As Christians, we are able to see in these guests, a veiled foreshadowing of the Trinitarian God, the God who said let us make man in our image and likeness. The reward for Abraham’s hospitality is what we see at the end of the encounter:  “I will surely return to you about this time next year, and Sarah will then have a son.” Indeed, “great things happen when God mixes with men”. Hence, anyone who welcomes another for the sake of God shall never go unrewarded. We see other instances in the Old Testament: The Shunamite woman giving Elisha his own room and provided for him out of her poverty, and she was heavily rewarded. We also see Lot offering hospitality to the visiting angels sent to Sodom, and his life was spared during the destruction of Sodom and Gomorrah. We also see the hospitality of Jethro towards Moses, etc.

Still in the same stream of hospitality, in the Gospel reading (Cf. Lk. 10:38-42), we are told that Jesus entered a village where a woman whose name was Martha welcomed him. It is pertinent to remember that Christ once said that he has nowhere to lay his head (cf. Lk. 9:58). Thus, in the need to carry out his missionary activity (travelling from place to place and spreading the Good News), a woman (Martha) received him and showed hospitality. While Martha was busy with the need to serve her guest (Jesus), Mary her sister, on the other hand, chose the better part by sitting at his feet and listening to him. What a great spirit of hospitality! In John chapter 11, we see the reward for this great hospitality shown to Christ. Simply put, Christ raised Lazarus (the brother of Mary and Martha) back to life, thus, wiping away the tears and sorrow caused by the death from the family.

I dare to reiterate what I said earlier: “anyone who welcomes another for the sake of God shall never go unrewarded”. The reward could either be in this life or in eternal life or both. In this vein, the Responsorial Psalm (Cf. Ps. 15) gives a strong proof to the veracity of this claim. It says: “He who does justice will live in the presence of the Lord. One who does not harm his fellow man, and casts no slur on his neighbour…One who walks without fault…” in the end, it says: “Such a man will stand firm forever”.

The Second reading (Cf. Colossians 1:24-28) drives home a practical message to us all. It should be noted that Saint Paul and his co-worker Timothy wrote this letter to the Church at Colossae (this we see in Chapter 1:1), a small city in Asia Minor (modern Turkey). Paul had not visited Colossae, but had received reports from Epaphras, the missionary who most likely founded the Church there. Paul speaks positively of the Colossian Christians’ faith, love, and hope (Cf. Col 1:4-5) and acknowledges that the Good News is bearing fruit and growing in them (Cf. Col 1:6). Consequently, as we see in today’s reading, Paul addresses them on the sufferings he passed through for their sake as God’s steward in order to bring to completion the word of God to them and the mystery hidden from ages and from generations past. This expresses the missionary life of Paul in spreading the Good News and consequently passing through hardships. On this note, it is apposite to say that we are familiar with that kind of purposeful suffering. Through the centuries, Christian missionaries have risked their lives to take the Gospel to primitive parts of the world––and are still doing so today. We admire their willingness to make sacrifices for a great cause (just as Christ did, travelling from place to place, as we see in today’s gospel, likewise Paul). These people actually leave their families behind and travel to distant isles and remote villages; passing through hardships, sufferings, lacking the amenities of lives; just as Paul pointed out, all for the sake of the Gospel. The question is: how many times have we noticed these missionaries among us? How have we treated them? Have we been hospitable enough to them? Do we see ourselves as people who must only benefit from them? Or do we also see the need for them to benefit from us through our hospitality?

Dearest friends, the cry for hospitality is still ringing in our present-day society. It is so unfortunate that our Western emphasis on individuality and independence has drastically diminished our understanding and the practice of this great and powerful virtue of hospitality. The critical question we must face is how welcoming are we to God in the persons of our fellowmen? How conscious are we of His presence in our lives? Do we feel too busy to pay attention to the needs of the people around us? How hospitable have we been to the poor who knock at our doors, begging for their “daily bread”? How we treat others is an indicator of how we treat God. We should be challenged by these questions.

May the good Lord continue to reward us for the many times we have been hospitable and sensitive to the needs of those around us. Amen.