Oh my God, I am heartily sorry for having offended you. I detest all my sins because I dread the loss of Heaven and the pains of Hell, but most of all, because they offend you, my God, who are all good and deserving of all my love. I firmly resolve, with the help of your grace, to confess my sins, to do penance, and to amend my life. Amen. 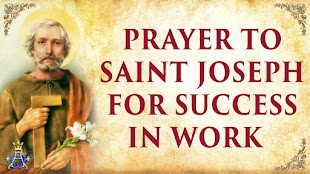 O glorious Joseph! Who concealed your incomparable and regal dignity of custodian of Jesus and of the Virgin Mary under the humble appearance of a craftsman and provided for them with your work, protect with loving power your sons, especially entrusted to you. You know their anxieties and sufferings, because you yourself experienced them at the side of Jesus and of His Mother. Do not allow them, oppressed by so many worries, to forget the purpose for which they were created by God. Do not allow the seeds of distrust to take hold of their immortal souls. Remind all the workers that in the fields, in factories, in mines, and in scientific laboratories, they are not working, rejoicing, or suffering alone, but at their side is Jesus, with Mary, His Mother and ours, to sustain them, to dry the sweat of their brow, giving value to their toil. Teach them to turn work into a very high instrument of sanctification as you did. Amen.
MEDITATION: DAY 3

This is the carpenter, surely, the son of Mary, the brother of James and Joset and Jude and Simon? His sisters, too, are they not here with us?’

The gospel of the Lord…

“SAINT JOSEPH, MODEL OF WORKERS FOR OUR TIME”

May 1 is a national holiday that commemorates “Workers’ day,” a day which the Church points us to Saint Joseph, a diligent example and model of workers. Put differently, as a way of promoting and encouraging devotion to Saint Joseph among Catholics, and in response to the “May Day” celebrations for workers sponsored by Communists, the feast of St. Joseph the Worker was instituted by Pope Pius XII in 1955. In his declaration, Pope Pius XII said of St. Joseph, “The spirit flows to you and to all men from the heart of the God-man, Saviour of the world, but certainly, no worker was evermore completely and profoundly penetrated by it than the foster father of Jesus, who lived with Him in closest intimacy and community of family life and work.”

Saint Joseph, who in the Bible is recognized as a just man, is the one who reveals with his own life that God the Father works, and through Him, work is sanctified. Unfortunately, most Christians, have a distorted view on the subject of work, and therefore, do everything to get rid of it. Sanctifying our work is the mission of all Christians. The Catechism of the Catholic Church teaches us: “The sign of man’s familiarity with God is that God places him in the garden. There he lives ‘to till it and keep it.’ Work is not yet a burden, but rather the collaboration of man and woman with God in perfecting the visible creation.” (CCC #378). This is so because right from the Book of Genesis, the dignity of human work has long been contemplated as a participation in the creative work of God. By work, humankind both fulfills the command found in Genesis to care for the earth (Gen. 2:15) and to be productive in their labours. Saint Joseph, the carpenter and father of Jesus, is but one example of the sanctity of human labour. Thus, we can say that work is a path of sanctification in which men must adhere in order to contribute to the growth of the society; for it is part of the cultural evolution of man, throughout history. Little wonder Saint Paul exhorts: “Whatever your work is, put your heart into it as done for the Lord and not for human beings, knowing that the Lord will repay you by making you his heirs. It is Christ the Lord that you are serving.” (Col 3, 23-24)

Sadly, we face many difficulties within the context of work in the society today: unemployment, injustice, slavery, dehumanization and laws that do not benefit workers. Even living in a materialistic society, which divides people by the type of work they do and which values ​​the human being for what he receives, the Church wants us to remember the dignity of work by setting St. Joseph as an example of one who laboured diligently for the good of his family and society. Jesus, too, was a carpenter (Mk. 6:3). He learned the trade from his father, Saint Joseph and spent his early adult years working side-by-side in Joseph’s carpentry shop before the commencement of his ministry. Pope John Paul II in his Encyclical, “Laborem Exercens” writes: “The Church considers it her duty to speak out on work from the viewpoint of its human value and of the moral order to which it belongs, and she sees this as one of her important tasks within the service that she renders to the evangelical message as a whole. At the same time, she sees it as her particular duty to form a spirituality of work which will help all people to come closer, through work, to God, the Creator and Redeemer, to participate in his salvific plan for man and the world and to deepen their friendship with Christ in their lives by accepting, through faith, a living participation in his threefold mission as Priest, Prophet and King, as the Second Vatican Council so eloquently teaches.”

Faced with a colossal problem of unemployment on the backdrop of corruption in a country like ours, the Church continues to speak truth to power and calls the faithful to continually place their trust in God in prayers and use their God-given talents to be inventive, rooting out all forms of laziness, while waiting for justice as everyone collaborates to vote for God-fearing and honest leaders in government who would create more employment opportunities.

Therefore, let us try to discover today and always, continuously, the presence of Saint Joseph in our families and society; and he will continue to be, as he always has been, our protector and model. May he also remind us to diligently treat those who work under our care and not dehumanize them or use them as though they were machines. May Saint Joseph continually intercede for all workers, for those receiving unjust wages or salaries, for those awaiting promotion at their places of work, for retirees with unworthy income, for those who live in the instability of the informal economy, for those who live without even a home, and most especially all the unemployed and those who are out of work, looking up to God for justice in an imbalanced and corrupt society like ours. Above all, as St. Joseph worked diligently, humbly, and silently in his carpentry shop to provide for the Holy Family, we, too, are called to work in humility and diligence for the greater glory of God (© Fr. Chinaka Justin Mbaeri, OSJ) 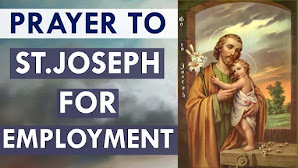 Dear Saint Joseph, you were yourself once faced with the responsibility of providing the necessities of life for Jesus and Mary. Look down with fatherly compassion upon me in my anxiety over my present inability to support my family.
Please help me to find gainful employment very soon, so that this heavy burden of concern will be lifted from my heart and that I am soon able to provide for those whom God has entrusted to my care. Help us to guard against bitterness and discouragement, so that we may emerge from this trial spiritually enriched and with even greater blessings from God. Amen.
OUR FATHER… HAILY MARY….X3 GLORY BE….
CONCLUDING PRAYER 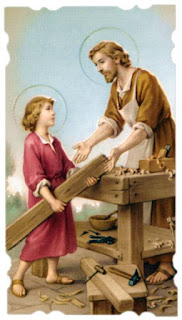 To you, O Blessed Joseph, we come in our trials, and having asked the help of your most holy Spouse, we confidently ask your patronage also. Through that sacred bond of charity which united you to the Immaculate Virgin Mother of God and through the fatherly love with which you embraced the Child Jesus, we humbly beg you to look graciously upon the beloved inheritance which Jesus Christ purchased by his blood, and to aid us in our necessities with your power and strength.

O most provident guardian of the Holy Family, defend the chosen children of Jesus Christ. Most beloved father, dispel the evil of falsehood and sin. Our most mighty protector, graciously assist us from heaven in our struggle with the powers of darkness. And just as you once saved the Child Jesus from mortal danger, so now defend God’s Holy Church from the snares of her enemies and from all adversity. Shield each one of us by your constant protection, so that, supported by your example and your help, we may be able to live a virtuous life, to die a holy death, and to obtain eternal happiness in heaven. Amen.

Through the intercession of Saint Joseph, guardian of the Holy Family, may the Lord bless + us, protect us from all evil and bring us to everlasting life. Amen.

👏🏼👏🏼 Great job praying Day 3! May the good Lord hear our humble prayers through the intercession of St. Joseph. Amen.👏🏼👏🏼

Saint Joseph model of workers, pray for me, amen.

St Joseph, patron of workers, pray for us

St Joseph pray for us Amen

Thank you St. Joseph for answered prayers through your intercession. Amen

Please St. Joseph, help me to find gainful employment very soon, so that this heavy burden of concern will be lifted from my heart and that I am soon able to provide for those whom God has entrusted to me.

St. Joseph, pray for us and all our intentions. Amen.

St Joseph into your hands I commend my sons.. Oliver Jude and John Henry bring them closer to you and reform them for better.
Also my daughters Queen good job and good husband, Zaram good husband and good job and MaryPaula to study hard for success.
Take me to where I belong lord because where I am is not where I supposed to be.
Write my story oh St Joseph

Amen
St. Joseph,pray for us

St Joseph model of workers
Pray for us. Amen

‘If St. Joseph does not grant graces, he would not be St. Joseph’

May St Joseph intercede and obtain gainful employment for Awwal Haruna and those seeking for job. Amen

It’s a wonderful month with St Joseph. Awesome experience. May God be praised. Thank God for leading me to St Joseph

May the good Lord hear our humble prayers through the intercession of St. Joseph. Amen.

St Joseph ,pray for us

Dear Fr. Chinaka, thank you for compiling all the prayer novenas.

Oh St Joseph, Patron Saint of Workers, intercede for us we pray.
Oh St Joseph, Spouse and Foster Father of our Lord, Jesus Christ, make our Families united in love like thine.

May God answer all our supplications through Christ our, amen.