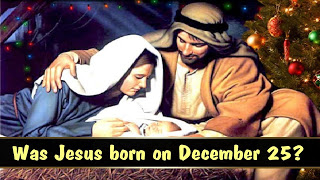 CHRISTMAS
QUESTION ANSWERED!
Was Jesus
really born on December 25th?
RESPONSE:
The answer is
no. Many Fathers of the Church thought that Jesus was born on 4TH of January, in
the year 04 B.C. before the death of King Herod the Great. Some Bible scholars
fix it in the month of September during the Feast of the Tabernacles when
people travelled and when the sheep were in the field at night.
If this is
so, how then do we come about December 25?
In the early
centuries, Christianity flourished in the Roman Empire, and many were converted
to Christianity. At that time, 25th of December was celebrated as the birthday
of the pagan god (the sun-god), and it was a very strong and influencing feast
in the roman empire. Hence, in order to prevent the converts from celebrating
with the pagans on that day, Pope Julius in 353 A.D. fixed December 25 for the
birth of the Son of God. This was simply a way of Christianizing the pagan
feasts so that the converted pagans might celebrate the birthday of Jesus on
Dec 25 instead of celebrating the birthday the Sun-god during winter solstice,
and that the converted Roman soldiers might celebrate Christmas instead the
birthday of Mitra, the Roman god-of-virility. Consequently, Emperor Julianus
declared Christmas as a national holiday in the 6th century. Most of the
present day Christmas decorations like the Christmas tree and Christmas lights
are also remnants of the pagan celebrations. It was St. Francis of Assisi who
first introduced the manger or Christmas crib in the 13thcentury.
With time, in
medieval epoch, the celebration of Christmas took the form of a special Mass
celebrated at midnight on the eve of Christ’s birth. Since this was the only time
in the Catholic Church year when a Midnight Mass was allowed, it soon became
known in Middle English as Christes Masse (Christ’s Mass), from which is
derived Christmas.
In this
festive period, let us always bear in mind that Christ is the reason for the
season; our attitudes tell a lot as to what we are celebrating. Let our
attitudes reflect a Christ-like celebration, otherwise we would not be
different from the roman pagans who celebrated the feast of their pagan gods.
This is the
season to share and express love/charity. Let us kindly reach out to those who
do not have, and bear in mind that, it is in giving that we receive.
It’s Christ’s
birthday…Make someone smile this Christmas!!!
FEW HOURS
FROM NOW…MERRY CHRISTMAS TO YOU ALL!!!

FELLOW CATHOLICS, IF YOU ARE BAPTIZED, IT MEANS THAT YOU’RE ALREADY “BORN AGAIN” AND HAVE GIVEN YOUR LIFE TO CHRIST

REFLECTION/HOMILY FOR THE MEMORIAL OF OUR LADY OF SORROWS, YEAR II